You are here: Home / Blog / Why The Robert Trent Jones Golf Trail is Vital to the Economy
This post may contain affiliate links or mention our own products, please check out our disclosure policy here. 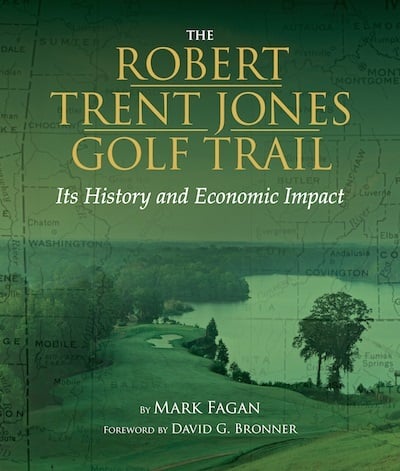 Golf’s economic contributions is roughly $70 billion annually and no other golfing project than the Robert Trent Jones Golf Trail has had such an impact.

Author Mark Fagan’s new book:The Robert Trent Jones Golf Trail: Its History and Economic Impact is an account of how the Retirement Systems of Alabama (RSA) strategically planned and executed what is by far the state’s largest tourist attraction.

Making the golf trail a reality involved the initial vision of RSA CEO David G. Bronner and his associates. It also involved the design genius of Robert Trent Jones Sr., as well as many dedicated engineers and builders. Additionally, the project required the cooperation of local and state-elected officials and economic developers.

Launched in 1990, The Robert Trent Jones Golf Trail includes 11 golf sites with a total of 26 golf courses. The trail also consists of eight resort hotels, offering 2,065 rooms plus 20 restaurants and lounges. Five of these hotels have world-class spas. In addition, the resorts consist of thousands of square feet of meeting space for several  national and international meetings annually. What’s more is the trail consists of 11 communities. These  include Mobile and Point Clear. They are about an hour from Alabama’s Gulf State Park, which are popular areas among RVers.

“These courses and their promotion have helped increase tourism spending from $3.3 billion in 1990 to $12.6 billion in 2015,” says Fagan. “The golf courses have an initial economic impact with a perpetual economic impact, as long as they are bringing in travel golfers.”

The Real Impact of The Robert Trent Jones Golf Trail

The book includes a detailed chapter on each of the 11 sites of The Robert Trent Jones Golf Trail. There are summaries of the courses and accompanying infrastructure. Yet, the real meat is the meticulous summary of the economic contributions that golf has made on a state’s finances. For instance, the trail has significantly increased Alabama’s infrastructure for tourism and conventions. As a result, millions in new tax revenues and spurred construction of adjacent housing have been created. The trail has even helped persuade other businesses to locate in the state.

According to the New York Times “The Trail is some of the best public golf on earth.” From my experiences, the statement holds true. There are also a lot of RV parks near most of the courses.

Mark Fagan’s book The Robert Trent Jones Golf Trail: Its History and Economic Impact is certainly worth the investment.