You are here: Home / Blog / The Silver Gypsy: A Spooky Night on the Blue Ridge
This post may contain affiliate links or mention our own products, please check out our disclosure policy here.

by Sharlene Minshall - The Silver Gypsy
August 28, 2013Filed under: 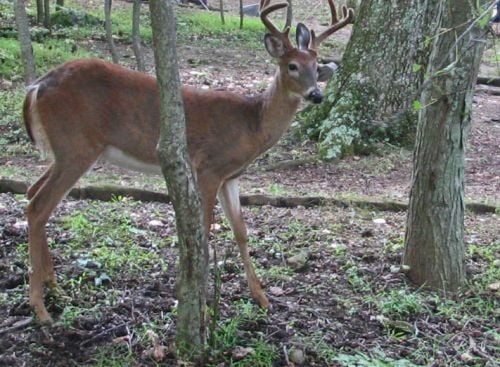 Last week I mentioned Will still needed three hours of night-time driving to apply toward his license so after leaving Charlottesville, we headed west on truck-clogged Interstate #64 and turned south at the northern end of the Blue Ridge Parkway near Humpback Rocks.  As we started our roughly 65-mile adventure, the sun was saying goodbye a tiny bit early by ducking behind the clouds.

The Parkway runs the ridges and valleys of the Blue Ridge Mountains for 469 miles through Virginia and ending at the Great Smoky Mountain National Park claimed by both North Carolina and Tennessee.

It is magnificent in any season, but especially with its rhododendron, mountain laurel, and dogwood in spring.  The autumn colors are even more electrifying if that is possible. It is exciting to experience the Blue Ridge when it offers only the brushcuts of winter or to travel along its curvy, hilly, narrow road and see the old homesteads, falls, mills, rocks and ridges in the summer.  It is, however, even more stimulating when it is very dark and your 15-year-old grandson, a new driver still earning his wings, is at the wheel!

Will is a very good driver but the trip kept me very observant.  I saw what I hoped was most of the amazing number of deer who were out enjoying their mountain home, but thankfully, his eyes were even better than mine.  They were everywhere.

We stopped a couple of times to take in the sunset and watched as the distant cities lighted up their section of the world but eventually, it was just VERY dark on those curves.  We talked a lot to keep each other alert.  We became extremely attentive when we saw cars on either side of the other end of the lighted Bluff Mountain Tunnel (The only tunnel on the VA Blue Ridge) as we headed into it.

Whoever it was had their lights on and we thought perhaps there had been an accident but as we approached, we could see people standing near both cars.  Nothing seemed amiss except that they were there around 9:30 on a dark night.  Needless to say, we did not stop.  In fact, I think Will sped up as much as the curvy mountain road allowed.

After that, we were both a little jumpy and were quite happy when we turned on to Route #501 toward home (another curvy mountain road).  We made it back by about 10:30 and his parents were probably as happy as we were that we had gotten back safely.  Imagination is a wonderful thing if you don’t scare yourself to pieces!  God Bless until next week.