You are here: Home / Blog / The Silver Gypsy: Another of Our Marvelous National Parks
This post may contain affiliate links or mention our own products, please check out our disclosure policy here. 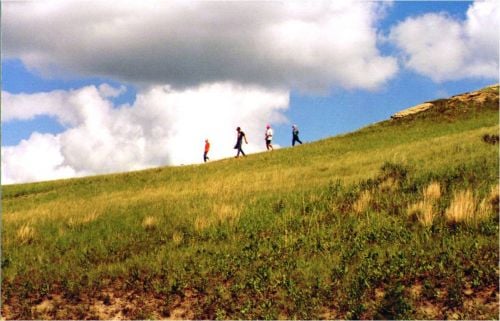 As I am flying off into the Wild Blue Yonder, I have retrieved and edited an RV Life column on the North Dakota Badlands that I wrote in 1994.  I’m sure this area has not changed all that much in the nearly 20 years since.

Wispy clouds floated over the grasslands and the oxbows of the Little Missouri River as it meandered through the two units of Theodore Roosevelt National Park near Medora, ND.  The park honors our 26th president who established the U. S. Forest Service and was responsible for 5 national parks, 55 wildlife refuges, and 18 national monuments.

Seventy miles separates the two sections of park, the South Unit Loop and the North Unit.  Hiking trails will take you into the Pliocene and Pleistocene Epochs.  The colorful pinnacles and peaks whimsically created by wind and water held my attention.

Droves of mosquitoes that helped fill the benches for the evening program were more than friendly. The speaker, in attempting to determine the erudition of his audience, asked, “What does it mean when a buffalo raises his tail?”  No one ventured a guess.  “It is either going to charge or discharge, so aim for the trees.”  You would not want to miss that kind of wisdom.

The badlands sustains Golden eagles, porcupines, elk, black-footed ferrets, badgers, coyotes, bobcats, mountain lions, and pronghorn antelope.  The interpreter said, “The pronghorn antelope is found nowhere else in the world.  It is second in speed in the world, only to the cheetah.  As soon as it starts running, it opens its mouth and runs with its tongue hanging out for extra oxygen and increased endurance.”  I could relate to that.

Sociable rodents in the prairie dog towns rested on sand hills outside their burrows, lazily watching the world go by.  They barked and jumped high in the air, the warning signals of the young and restless.  One had reason to bark.  A rattlesnake slithered through the mounds with a fearful prairie dog alternately venturing close, then jumping back when the rattlesnake issued his warning.  The brave little fellow paralleled the snake’s zigzagging course until the snake disappeared.  Obviously, humans have influenced the lives of the more up and coming urbanites.  I saw six prairie dogs gathered at a mound celebrating happy hour.  One of them was the conquering hero embellishing his story about riding a rattler out of town on a rail.

Sixty million bison once roamed the vast spaces of the west.  Herds are difficult to find in 46,000 acres but I saw two shaggy 2000-pound loners who were ostracized from the main herd, a questionable reward for their senior years.

In the 1880s, Theodore Roosevelt  worked in and loved this unique country.  He said, “It was still the Wild West in those days…a land of vast silent spaces, lonely rivers, and plains where wild game stared.  We worked under scorching midsummer sun, when the wide plains shimmered…in the heat.  In the soft springtime the stars were glorious in our eyes…in the winter we rode through blinding blizzards….We felt the beat of hardy life in our veins…ours was the glory of work and the joy of living.”

It was 5 a.m. in my world.  The sun burned off the night mist as a lonesome train whistled in the distance.  A long white jet trail crossed the blue sky.  Water-sculpted buttes and valleys were lush and green from slurping rain the night before.  Wild flowers danced and meadowlarks sang.  Visit your heritage.  Take only photographs, leave only footprints…and with hundreds buffalo roaming nearby, be especially careful where you leave those footprints.  God Bless until next week.

Winter in the Wilderness, the first e-book novel published by Minshall, is offered through Amazon and  most Internet book sites.  A print edition may be obtained from Amazon or you can order an autographed copy from the author at Box 1040, Congress, AZ for $7.95 plus $3.50 for postage and

handling.  The fourth edition of RVing Alaska and Canada is available through Amazon.com.