You are here: Home / Blog / The Silver Gypsy: Exploring the Desert!
This post may contain affiliate links or mention our own products, please check out our disclosure policy here.

by Sharlene Minshall - The Silver Gypsy
December 25, 2013Filed under: 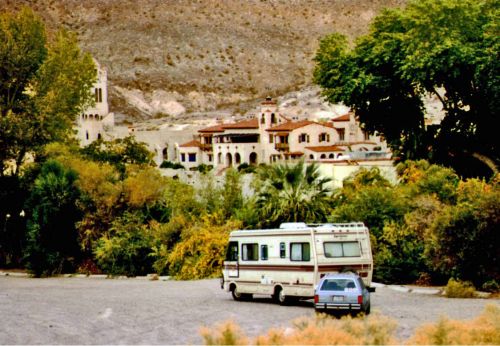 Early Saturday morning, Mona Mesereau, our  Public Relations leader, gathered us, along with the box lunches, and once again we climbed aboard the van with its abundance of water, and Bob, our interpreter.  We headed to Scotty’s Castle, 55 miles north of the Inn.  Bob explained all the natural and colorful human history along the way. 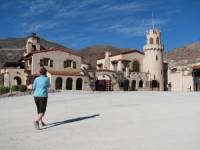 The picture of the motorhome and car in front of the castle is mine.  I had driven down Grapevine Canyon from Scotty’s Junction in NV, probably in about 1995.  I didn’t remember the road being quite so bad.  This time we were driving through major reconstruction.

Scotty’s Castle was built in the 1930s pretty much at the behest of a swindler by the name of Walter Scott.  The Chicago millionaire, Albert Johnson, liked Scotty well enough not to mind that the Death Valley gold mines he invested in with Scotty, never materialized.  Albert and his wife built an elaborate Spanish-style mansion and Scotty lived the good life along with them.  Costumed National Park Service rangers lead tours through the elaborate castle and tell stories of the Johnsons and Scotty.  Mr. Johnson was an engineer and well ahead of common usage, the castle had solar-heated running water and other amenities you wouldn’t expect in a 1930s castle. 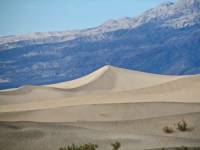 I finally realized that I had been there three times before, originally with the family, later with the motorcycle friend, and once by myself for a special evening dinner and tour of the castle.

After our picnic, we drove a short distance to Ubehebe Crater, a place I had never experienced.  Over 3,000 years ago, a massive volcanic explosion took place, caused by the violent release of underground steam pressure.  After years of the cinders and dust settling, we now looked directly into the 600’ deep crater.  It was otherworldly, very windy, and there is some discussion as to whether the volcano within may still be active.

As a former Michigander, I have seen my share of spectacular sand dunes.  As we approached the rising dunes at Mesquite Flats, it was fascinating to see the ripples and patterns brought about by the constant shifting of gazillions of windblown sand particles; but instead of Lake Michigan rippling in the background, the brooding Grapevine Mountains watched over all. 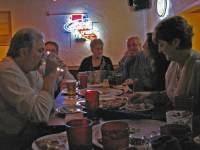 Our last stop was the Harmony Borax Works, a refinery operated from 1883 to 1888.  It is the birthplace of the famous Twenty Mule Teams.  An original wagon and the ruins are evidence of the industrial activity that once took place there.

After barely enough time to dust our britches, we were having cocktails at the Corkscrew Saloon.  It was a fun time of sharing pizza and getting acquainted.  Later we went outside to claim the chairs that had been set aside for us.  The music was lively, fun, and obviously enjoyed by those of us who were privileged to be there.  A long, but enjoyable day.

In real time, this is Christmas Day.  I hope you are all with good friends or family and that you are having a blessed Christmas.  God Bless until next time.