You are here: Home / Blog / The Silver Gypsy: Hog Roast
This post may contain affiliate links or mention our own products, please check out our disclosure policy here.

A short distance after leaving North Ranch, I stopped to open the gate into the desert and BLM land.  Fortunately, a fellow in a truck was ahead of me and he graciously allowed me through and shut the gate after both of us.  Free ranging cattle live out there.  After an interesting, snake-inspired drive through several miles of iffy desert trail, a number of cars and people gathered in an iffy circle.  It was filled with a variety of people wandering around talking with each other, empty lawn chairs, and many foldable tables covered with various and sundry foods.  Mostly the people were from North Ranch but with probably 800 people living here, we don’t all know each other. 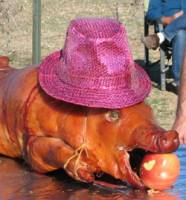 A portable aluminum container put together over a hole in the ground covered the unfortunate roasting pig who was eventually brought up tabletop with cooked eyes.  An apple was stuck in his mouth but he didn’t look any happier!  He was the subject of many photographs and eventually found peace (I hope) providing various deliciousness to waiting plates.

The Hog Roast was initiated by Judy and Tom Fisher for Judy’s third anniversary of her 70th birthday.  They have been full-time RVers for a long time.  They especially like boondocking as far into the middle 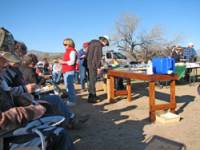 of nowhere as they can get.

It has been my privilege to find them with very specific instructions in one of those locations for breakfast last spring.  But today they were greeting friends and family and sharing yet another desert location.

I’m not sure where she is stashing her husband, Tom, but she is planning to continue her hike of the Appalachian Trail for two months this summer.  She takes her tent and gear and replenishes her food supplies as needed at stores near the trail.  Judy has already hiked approximately 1,000 miles of the trail and looks forward to enjoying its treasures for another long section.  The Appalachian Trail is around 2,100 miles long, starting at Spring Mountain in Georgia and ending at Mount Katahdin in Maine, passing through twelve other states.  Good luck, Judy.  Actually, she doesn’t need luck; she’s carrying that licensed piece that is always strapped to her side when she is out in the wild.  Don’t mess with her!

But, back to the Hog Roast.  The mountains of food disappeared to appease hungry appetites and eventually Tom started a fire that by late afternoon felt really, really good.  A nearly full moon popped up over the mountains as the sun headed down the other side.  It was a beautiful afternoon with beautiful people honoring the birthday of a beautiful friend.

NOTE:  Thanks to Wanda Clark for her comment on the blog about eating at Lambert’s.  It certainly was a fun experience for me and right this minute, sitting in the AZ desert, I wish one were within a reasonably short distance!  Yum!  God Bless until next week.

Winter in the Wilderness, the first e-book novel published by Minshall, is offered at most Internet book sites, soon available as a print edition.  The fourth edition of RVing Alaska and Canada is available through Amazon.com.