You are here: Home / Blog / The Silver Gypsy: Lesson “LLLL”
This post may contain affiliate links or mention our own products, please check out our disclosure policy here.

by Sharlene Minshall - The Silver Gypsy
August 20, 2014Filed under: 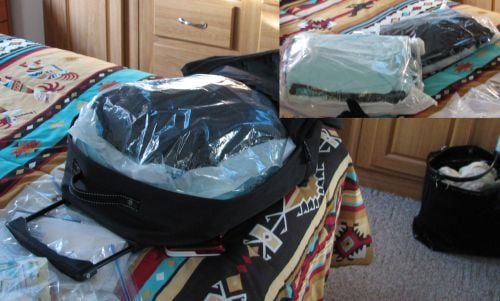 My flight was late out of Lynchburg, late out of Charlotte International, NC, and late to arrive in Phoenix.  So what’s new? I didn’t want to jostle any friends out of a warm bed at 1 a.m. to pick me up so I found a quiet spot to wait for daylight, perchance to sleep.  It was right across from the “lost luggage” office.

Luggage streamed in via carts loaded to the gills, followed by aggravated people hoping to retrieve their belongings.  Mostly the situation was beyond hope.  Agents tried to be helpful, but without some kind of magic pulled out of the air, mostly passengers were doomed to LWL (Leave without Luggage).  The answer, it seems to me, is in the packing.  My youngest, Tracey, whom I was visiting in VA, taught me that lesson many years ago when her son was new at walking.  He carried his own “stuff” in his backpack and she had everything else for both of them for a week in her backpack.  No luggage.

It took me a while of dealing with luggage at big and little airports from AK to FL to AZ to NJ and beyond to learn that lesson.  Add to the lost luggage saga the baggage fees and it makes all the more sense to LLLL.  I didn’t cut back to carry-on luggage for that reason but it is a good one.  I got tired of the lost luggage drama so over last summer’s four-tier trip from AZ to VA to MI to WA and back, (which would have been a major cost in luggage fees), and this year’s five-week trip to VA, I came up with this plan and it works.

I packed and sent Priority Flat Rate boxes ahead at $17.50.  They are relatively small but I’ve learned to be a great packer.  I really plan between one carry-on and one carry-all.  For the first time and since I am relatively certain (until they catch on) that I will be visiting my daughters at least once a year, I gave Tracey a list of things to buy for me like toothpaste, deodorant, hair brush, comb, nail clippers, and other incidentals I would either use up or pack away for next year.  I also asked her to go to Good Will (or Salvation Army) and get a pair of sweats for sleeping, slippers, pair of garden slip-ons, robe, sweatshirt, and a purse.  She was diligent and found me treasures that were either new or looked new, washed them, and I had a drawer full of possibilities when I got there. Both daughters bought walking poles for extended walking or rough terrain.

When packing, I took a pair of jeans for playing and two pairs of slacks and several interchangeable, wrinkle-free tops for church or going out.  (Next year I’ll make that two pairs of jeans and one pair of slacks.)  Otherwise, I packed mostly my rattiest underwear, socks and questionable tops so they could be tossed at the end of the trip.  This left room for a Blue Ridge sweatshirt I bought.  I put all the clothes in a plastic “space bag,” laid down on it and smashed it (that would smash anything) until all the air was gone, then packed all the electronic cords, vitamins, and misc “stuff” around it.  My carry-all bag had a very small, warm blanket (planes are often cold) plus money, passport, boarding passes and a wallet.  Anything small and loose was put into a Ziploc bag.  Instead of a computer, I carried two flash drives that sufficed for working on important stuff like this blog.

So there you have it, Learn to Live with Less Luggage.  God Bless until next week!