You are here: Home / Blog / The Silver Gypsy: Manta Ray Water Ballet
This post may contain affiliate links or mention our own products, please check out our disclosure policy here.

by Sharlene Minshall - The Silver Gypsy
July 16, 2014Filed under: 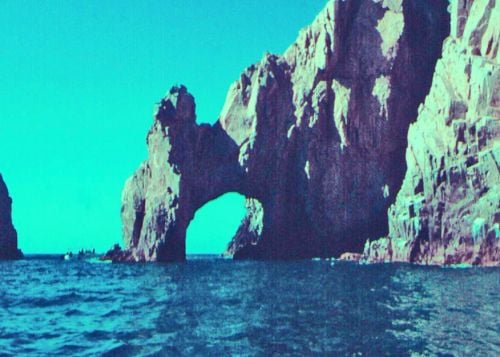 Dear Readers:  Once again I take you South of the Border to the tip of Baja for an adventure I wrote about in 1987.

I am on the beach.  There are no footprints behind me, nor footprints ahead of me.  No one has ever walked here before me.  I am the first.  I am woman.  The ocean sprays salt on my face.  I lick my lips.  It tries to mesmerize me with the rhythm of the waves and make me forget the dangers of the undertow.

A great wall of blue-green water roars up the steep incline of sand in an attempt to sweep me off my feet but I hold fast to my part of terre firma and the roar spends itself and instead, gently washes my feet in snow-white foam.  I know that six feet closer and I would be carried deep into the arms of King Neptune – King Neptune, you’ll never get me!

On the other hand, what are your qualifications?  You’d probably say something like, “Woman, you have funny feet for a mere maid,” and I’d reply, “Your green hair isn’t something to write home about either.”

Ah, but back to reality.  I am tagging along with Carr’s Baja Caravans (I went with them from Santispak and back and later traveled to AK with them).  We are here at Brisa Del Mar near San Jose Del Cabo, with miles of beautiful white sand beach and mountains in the background.

For two days, we have been watching manta rays flying several feet parallel to the water and fall back with a splash.  Sometimes, there were as many as six at a time performing this water ballet.  They are quite large and triangular shaped with a long tail.

We traveled en masses to the open market in San Jose and then on to the El Presidente Hotel for a delicious brunch under the shade of the palm trees overlooking the pool and the Sea of Cortez.

A casual remark about going into the pool with our clothes on developed into a $20,000 peso bluff.  Clark, 70, our tailgunner, a former deep sea diver and the life on the party, without hesitation, walked right into the pool much to the surprise and appreciation of all the guests.  They clapped.  I paid up and Clark was surrounded by hotel guests taking his picture.  He was a good sport and I learned my lesson!  Never try to outbluff another senior citien – I’m new at this game folks.

We took a back road to the campground.  Along the way we crossed a stream and in it were a Mexican family doing their washing.  Some of the clothes were scrubbed against the rocks.  A young boy stomped on clothes in a washtub.  One of the things that impresses me so much about Mexico is the way the people dress.  Their clothes are always whiter than white despite the dust which is everywhere and the usual lack of inside water facilities.  Even traveling miles back in to the mountain communities, people tend to be dressed to the nines.

I had never tried snorkeling before and I wasn’t at all sure of the mask-over-the-nose business but when I had to stick that big plug in my mouth, I was really having second thoughts.  (Why didn’t I have that plug in my mouth about $20,000 pesos ago!)

The minute I went into the water and put my face down to view the underwater world, I was totally hooked.  I loved it.  It is a whole new world.  On top it looks like a few rocks sticking out the water.  Underneath, there are hugh canyons filled with fascinating creatures of the sea.  My first experience was a three-foot long indigo blue fish.  I followed him until he disappeared.

There were red and black ones, and green and yellow – all colors and absolutely gorgeous.  I swam along in a school of 10-inch fish and some of them touched me as they passed.  I got very excited when I saw this huge white thing swimming close to the bottom.  I was a little scared of it but just had to get closer…it was a garbage bag!

I had goosebumps but I didn’t know whether it was because I was cold or so excited about this new adventure.  I finally decided I was freezing and went in.  We went again the next day.  I highly recommend it to everyone.  It isn’t expensive and it doesn’t require any great physical or athletic prowess.  If you were reasonably close to shore, I don’t think you would even have to know how to swim, just float.  There is a danger in getting so excited you forget where you are and wind up a lot further out than you intend to be.

There is definitely something “fishy” about this new experience but it was fantastic.  Try it, you might like it, too.  Next week meet me at the fabulous Hotel Cabo San Lucas…for cocktails.

Hope you enjoyed my “fish tail” from South of the Border.   God Bless until next week.