You are here: Home / Blog / The Silver Gypsy: Mission Trip – Part 1
This post may contain affiliate links or mention our own products, please check out our disclosure policy here.

by Sharlene Minshall - The Silver Gypsy
July 23, 2014Filed under: 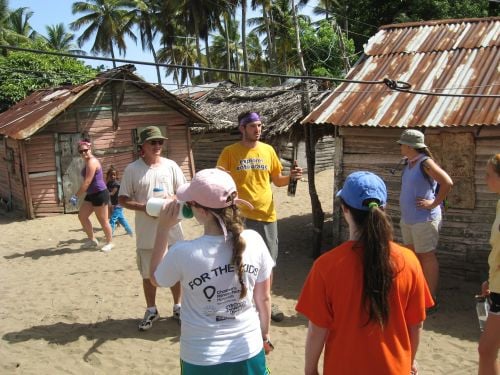 The Senior Youth Group from Peakland United Methodist Church out of Lynchburg, VA, worked on all aspects of the Dominican Republic Mission Trip Project for nine months or so before leaving.  Six out of the 18 were returns from the Mission Trip in 2012, including my daughter, Tracey Norvelle, and my grandson, Will.  The funds for their flights, on-site mission food, and supplies, were furnished by fundraising, donations, and individuals, plus the church paid a portion of the cost for individuals who were part of it.

The group was scheduled to fly United Airlines from Raleigh, NC, to Newark, NJ, on June 14, then on to Santiago, Dominican Republic.  United Airlines cancelled the first flight segment.  Frantic calls went out to all the participants the evening of June 13 to immediately meet at the church, with suitcases packed and ready to go.  In four quickly rented vehicles, they left church and drove throughout the night to Newark, NJ.  They landed in Santiago around noon on Saturday and were driven in vans to the Mission’s camp near Luperon, the Dominican Republic. 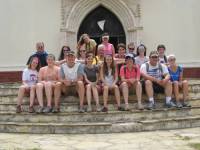 What I noticed the most personally from the last Mission Trip was that in 2012 it took me nearly three days to unwind.  This time I knew I needed to adjust my mindset to slow down to their speed as soon as possible.

Since 2012, the Village Mountain Mission had bought land and put up four buildings.  A solar powered staff house was nice but not luxurious. The kitchen was in another open air building where we sat on chairs or on the low side walls.  We were served three hearty meals a day that consisted of beans and rice and various mysterious other ingredients.  We had lots of fruit, melons, and watermelons.  Two native ladies did the cooking and the meals were delicious.  Eventually, a home will be built for a Dominican family to live on site and take on the role of caretakers.

We had two open-air shelters with concrete floors that were bigger and better than two years before.  We slept on hammocks and two people brought tents.  We had a beautiful scene of the mountains, the river, and palm trees. This year we did not have the friendly tarantulas, probably because of the stiff breeze that really felt good in the extreme heat.  We walked to the latrine that was in the middle of the field. 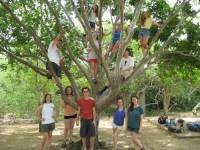 There are three types of missions:  the Mission for building homes; Mission Schools for education; and the Medical Mission where the natives are taught to help take care of their own people.  The house building plans rarely change.  The need is great and it takes approximately 3 to 4 weeks to finish a house.

The job site was an hour away.  We rode standing up, clinging to overhead bars in an enormous cattle truck.  Most of the time it was just the 18 of us plus staff bouncing along in the truck but once we had another group tagging along which took us up to 30 people.  Another day, enough extras were added that we had 40 people riding in the truck, all stinky at the end of a work day.  We bounced down rough roads, ducking branches, and hanging tight.  The only place the road was smooth was in the middle of town where it was paved.

At the work site, we had a magnificent view of the Atlantic Ocean, palm trees, and white sand beach.  The job site itself was better than before.  Last time we had to climb up a hill each day to start the build.  This area was flat.  Everything was more coordinated than last trip.  Materials we needed to start the projects were actually there and ready to be used.

A staff camp leader told us what to do and how to choose jobs.  Our eighteen people were split between houses depending on their skills and desires.  Some loved to work in high places, others not so much.  I started as a water girl and Will loved working on the roof.  We immediately pitched in and everyone worked hard.  Our group was made up of 3 male adults, 3 female adults, 3 boys and 9 girls. 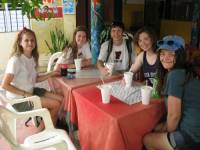 We worked between three houses.  The first day we tore down an existing house, and then dug trenches for footers and started on the block wall for the new house.  On the second house, the block wall and framing had already been done.  We finished the framing, put up the corrugated roof and the woodsiding.  On the third house, we continued laying blocks for the wall. The second house was the one we came the closest to completing but it still needed to have the gables finished, the doors and windows with shutters (no glass) added, and the concrete floor poured.  The size was approximately 15’ X 20’ for a family of 10 with 8 children.

We weren’t sure for how long she did it, but the mother slept at the job site on top of the roofing and lumber so that it wouldn’t be stolen.  About 80% of the people are unemployed.  One young Dominican fellow who worked so hard building with us two years ago was still there employed by the mission.

Will and I had a favorite mother that we talked to.  Few of the Dominican people knew any English.  We tried to figure out what they were saying and we smiled a lot.  Will added, “I could make myself understood and understand ‘most’ of it through three years of Spanish classes.” She showed us her new home, and said what so many said, “I will be so happy that our family will be dry.”  She told us that we had such good hearts for taking on these big jobs.  They were delightful people.  If they knew you were from the mission, they really liked you.

Dogs, chickens, pigs, and donkeys wandered everywhere.  Animals are not contained.  The cows wandered, too, but usually somebody was watching them.

Thanks, Tracey.  Let’s finish the story with more pictures next week.  God Bless.

A reason to check it out:  “The project provides plenty of fun and High Adventure for our young people to reward their hard work, while they learn about the Third World.  We visit remote mountain villages, where the wealthy never go, and tourists are rare.”