You are here: Home / Blog / The Silver Gypsy: Organ Stop Pizza
This post may contain affiliate links or mention our own products, please check out our disclosure policy here.

by Sharlene Minshall - The Silver Gypsy
May 7, 2014Filed under: 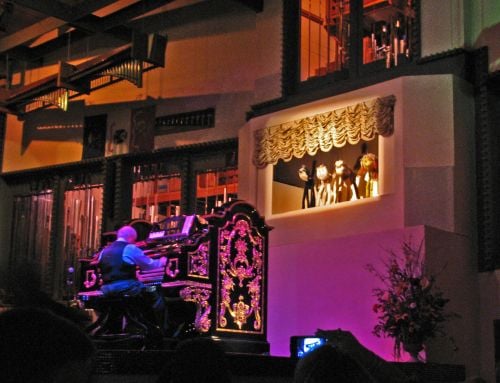 Sandy and Bob Wilson, daughter Pam Bridges and I, made our way to Mesa, AZ, on the east side of Phoenix, to the Organ Stop Pizza place.  It is a huge building with 43’ ceilings for great acoustics.  We settled into one of the many long tables and comfortable chairs on the outer edge.  It was quite dark inside and noisy with so many people.  An 8,000 lb, rotating hydraulic elevator brought forth a very fancy, enormous organ from somewhere below and Charlie Balogh was already playing.  He played the “big” stuff that lent itself to the bigness of the place and the organ itself.  He did “The Pink Panther,” “It’s a Small World Everywhere,” and my favorite, “Phantom of the Opera.”  That always gives me the chills.  From there, he proceeded to “Alleycats,” “Star Wars,” and other big songs that perfectly fit the “World’s largest Wurlitzer.”

Many instruments can accompany him with the press of a button, the turning of a handle, or a nudge from his foot.  I won’t name all the instruments as seen around the upper part of the room for you to watch, but the console itself has 4 manuals, 276 keys, and 798 stops and controls plus those 6,000 pipes.  I watched in great fascination and although the organ turned one side than another so you could see the whole effect, I think it would be interesting to sit in one of the balconies to be able to see it from above. 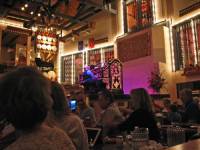 What a job to have!  Entertaining and doing what you enjoy.  Of course, he is probably as tired of playing Phantom as I was excited to hear it.  He asked if there were any special celebrations going on and one couple were celebrating their 60th wedding anniversary.  He said, “I have the perfect song for you” as he launched into “Battle Hymn of the Republic.”

Charlie is originally from Trenton, NJ, and has played in numerous places in his 14-year history as a performer.  In 1991, he came to Arizona with his family.  He has also been a leading National Theatre Organ concert artist, performing worldwide.  He has pipe organ records and was named “Organist of the Year” by the American Theatre Organ Society in 2000.  Charlie alternates with two other organists, Lew Williams and Donna Parker.  They play for about 15 minutes with a short rest while you concentrate on the pizza.

The pizza was outstanding.  I don’t normally care that much for thin-crust pizza but the baking pans had nubbins on the bottoms and therefore cooked the pizzas quite crisply.  It was really good.  The drippings you see on the screen are a result of my mouth watering.

And poor Bob had to drive that LOONG way back home, probably 2.5 to 3 hours long.  It was great fun.  God Bless until next week.