You are here: Home / Blog / The Silver Gypsy: Teachers, Our National Treasures
This post may contain affiliate links or mention our own products, please check out our disclosure policy here. 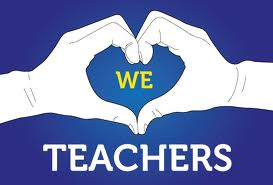 Continuing with my reminiscing of class reunions, way back in the dark ages, 1999, I wrote a column on the visit that two classmates and I had with our 1950s Home Economics teacher, Miss Burman.  I had talked with this lady on the phone.  Her voice at eighty-one, was strong and authoritative.  I just knew she was still fourteen feet tall with a military bearing and her back straight as a rod.

At sixty-something, Peggy, Shirley and I, were seventeen-something apprehensive.  It was a day I wanted to shine as an exemplary past pupil but three sweaty August hours riding in a hot car did nothing for my confidence.  My pals looked svelte and attractive.  We rang the doorbell.  I was already convinced she would take one look at me and say, “I knew you’d turn out like this.”  When she opened the door, we chorused together, once more teamed against “The Force.”  “Good Morning, Miss Burman.”

We had nothing to fear.  Our Miss Burman was delightful.  Yes, she was straight as a ramrod and still fourteen feet tall.  She still had those sparkly eyes and that suspicious I-may-not-know-what-you-are-up-to-but-I’m-watching teacher’s smile, and of course she automatically took control of the situation.

She greeted my classmates warmly but declared she didn’t remember me at all.  She recalled the family name from my four older brothers but I could see in her eyes that where I was concerned, she hadn’t a clue.  I didn’t know whether to feel terrible, thank the Lord profusely, or try to jog her memory.  I suppose I had changed.  The long auburn tresses had long ago turned to long locks of silver.  About the only thing that had stayed the same were the blue eyes.  I’m not sure that explaining my full-time traveling in a tin box on wheels as my full-time home impressed her either.   I think in her mind that information compared to living under an overpass (which I had also done for a few nights but I didn’t tell her that story).

Muriel Burman really was a treasure.  When we inquired as to her health, she declared:  “I’ve got all my buttons and all my vitals work, but my frame is breaking down.”  We complimented her clothing and she said, “This dress covers everything but touches nothing.”  I knew that came straight out of a 1954 lesson plan.  She claimed that “Arthur” was always after her, as in arthur-itis.   Her doctor called it, “The fruits of aging.”  She called it, “The pits.”

Miss Burman never found the time to get married and was still very independent.  She lived alone in a small town apartment.  With tongue in cheek, she said she was writing a book titled, “The Shady Side of Hill Street.”  She insisted on paying the luncheon check and we wouldn’t have dared argue with her.  Once in charge; always in charge.

Peggy and Shirley and I heard from her a few more times.  In her last letter, she said she hadn’t been out much during the rough Michigan winter weather.  “I’m afraid of falling in the ice-covered parking lots.  I have to stay vertical; otherwise, I am in trouble!”  As I recall, that was another lesson from the Marriage and Family section of that long-ago Home Economics class.

I’m not sure it’s politically correct any more, but if you are lucky enough to find a retired teacher back in your life, give him or her a hug.  They are truly our national treasures.  God Bless until next week.