You are here: Home / Blog / The Silver Gypsy: The Final Adventure
This post may contain affiliate links or mention our own products, please check out our disclosure policy here.

by Sharlene Minshall - The Silver Gypsy
January 1, 2014Filed under: 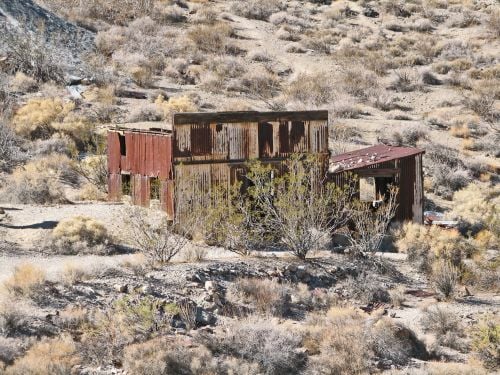 After munching down on a muffin that had as much date butter as I could load on it, and juice, Kevin, another writer, and I took the elevator down to the tunnel and out at ground level and across the street to Farabee Jeep Tours to meet the rest of our group.  We were to be among the first to take advantage of a guided tour with Farabee Jeeps in new partnership with Furnace Creek Resort. 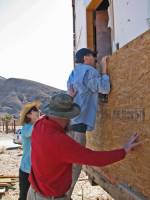 Roger, Andy, and I piled into one jeep while the rest crawled into the other.  Our first stop took us briefly back into Nevada to the ghost town of Rhyolite, a mining town brought to life when quartz, found in abundance, was described as “just full of free gold.”  As boomtowns did, hotels, a school, stores, electric plants, foundries, a hospital, and even a stock exchange and Board of Trade, grew into an active community. It laid claim to a unique Bottle House made out of 50,000 beer and liquor bottles.  In more recent years, it was renovated thanks to Paramount Pictures.  It now stands mostly alone as the wind blows through the few standing or partly standing buildings, remnants of the exciting glory days of the early 1900s.  By 1916, the lights and power were shut down and the nights were silent again but for that blowing wind.

We continued our adventure back into Death Valley NP, CA, and a 26-mile, one-way tour of Titus Canyon.   I had not been in this canyon before and it offered spectacular views.  The driver stopped at Red Pass where we took pictures and marveled at the twisting-turning path that lay ahead of us.  We stopped to investigate the ghost town of Leadfield.  It lived from 1926 thru 1927.  The entire unpaved drive was quite amazing but even more fun as we advanced into the canyon’s narrowest part.

I love jeep rides into places you shouldn’t travel with a sedan – and for sure, you would not get a big RV through the canyon’s most restricted points.  The jeep sunroof provided views directly above as well as the sites through the windshield.

We arrived back at the Inn’s Sunday Brunch about an hour late.  It is acclaimed for its vast array of choices, even to the point of private flights into Furnace Creek on Sunday mornings, specifically for this brunch.

We later congregated for farewell cocktails at the Inn’s poolside before we had our last dinner in the Inn Dining Room.

After a final breakfast with Roger and Mona, everyone arrived for the 8 a.m. departure.  Unwilling to give it up so completely, Mona took a last side trip through Twenty Mule Team Canyon.  It paralleled the road through a twisty, hilly canyon, just our type. 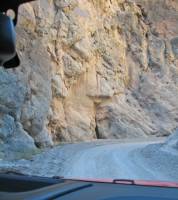 It was a fun trip with a great group of writers, so ably scheduled by Mona Mesereau, our promoter and leader.  Although I had been there many times before, I learned and experienced new things, a good reason for a repeat trip to Death Valley National Park along with the first time adventure of staying in a major resort.

Back in real time, this is January 1, 2014, and the beginning of a new year, a new chapter, a new adventure, a new everything.  Make the most of each of your new minutes and new days.  Many hugs and God’s blessings to you from this Silver Gypsy.