You are here: Home / Blog / The Silver Gypsy: The Wider World
This post may contain affiliate links or mention our own products, please check out our disclosure policy here.

by Sharlene Minshall - The Silver Gypsy
August 13, 2014Filed under: 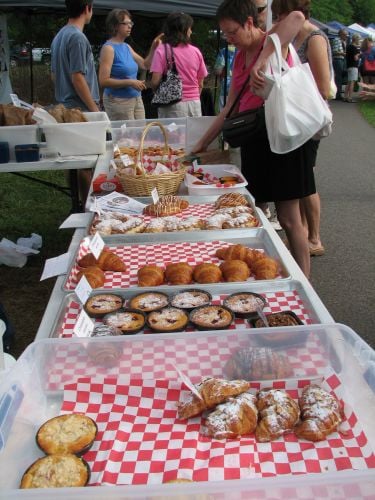 It is always interesting to visit other churches.  I went with my kids to the Peakland United Methodist Church my first Sunday in Virginia.  The second Sunday I went with my son-in-law’s parents to the Chestnut Hill United Methodist Church.  They were the same denomination but completely different in delivery.  Tracey’s church presented the 20+ kids that had just attended their Summer Bible School. 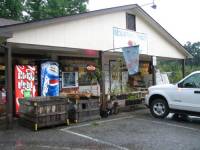 We were given stories and examples of their work but the most fun was when all the kids were up in front singing and dancing to the songs they had learned.  You could almost tell who had missed a few sessions or maybe just weren’t paying attention.  They were the ones that were at least a step and a half behind the rest when it came to swirling around in a circle or clapping their hands to the rhythm.  They were adorable and oh so lost…dancing that is.  I’m sure with that enthusiasm, grace, and sincerity, they were on a path straight to heaven’s doors.   All the congregational songs were also straight from long ago Summer Bible School, Jesus Loves me and Jesus Loves the Little Children. 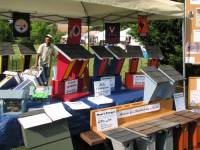 With several services every Sunday, not everyone knows everyone else so immediately after church, we were all part of a big potluck dinner in an effort to get to know one another.  Only two families were represented at our table.  My daughter and the other wife discovered they had both attended and graduated Michigan State University in the same time period and very likely had eaten together in the dining hall.  The husband knew my son-in-law’s sister and her husband.  Other similarities surfaced as the dinner progressed.  Discovering how small the world is, is always fun.

I love the small outdoor and indoor farmer’s markets that are so predominant East of the Mississippi.  We went to one early on a Saturday that had everything from fresh meat to home baked goods, birdhouses, and yes, even tomatoes, potatoes, fresh peaches, and other goodies.  Participants had put up canvas covered stands to protect themselves and their goods from the sun.  It wasn’t a large market but it had all the necessities. 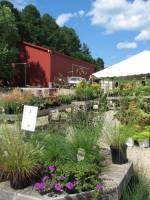 Another day my son-in-law’s mother, Sue, accompanied me to the Gross Apple Farm near Bedford.  They not only had all kinds of fruits and vegetables and specialty canned goods but they also offered hay rides back into the orchards.  Up the road a ways was a small market I had not seen before but Sue knew about it.  Mountain Fruit and Produce had a lot of fruits and vegetables, too, but they had something even better, homemade ice cream and well, Sue described them as cut up apples put into crust and fried!  I had not heard of this combo before so I asked her what they were called and she said, “goo-ood!”    No arguing with that! 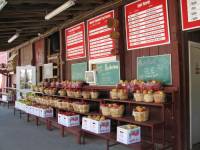 All of you full or part-time RVers have already discovered this but those who are new at RVing might not have learned yet that traveling around the country is an exciting way to learn how the other half lives.   I think I just needed a change of scene from the desert and all the green trees, blue-hazed mountains, and bright colored flowers have done a bang-up job.

Sue has been a fun companion on other trips and this one was no exception.  We had lunch at the Peaks of Otter Restaurant on the Blue Ridge Parkway.  As we sat enjoying the lake, the Peaks, and the Parkway, a small doe nonchalantly tapped her way along the sidewalk below the restaurant window next to the lake.

Sue and I think along the same lines.  We made plans to enjoy a treat with our grandson, Will, at the Sweet Frog, the frozen yogurt place.  Maybe it will become a yearly gathering as we did the same thing last year.  Calories…well, there are very few when you share them with a grandchild.

Next time I’ll take you on a visit to Walton’s Mountain.  God Bless until next week.