You are here: Home / Blog / The Silver Gypsy: The Yarnell Hill Fire
This post may contain affiliate links or mention our own products, please check out our disclosure policy here.

by Sharlene Minshall - The Silver Gypsy
June 25, 2014Filed under: 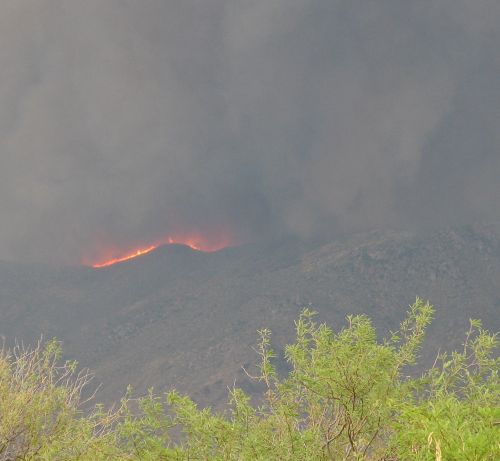 I live in the flat desert country south of Congress, Arizona, about 15 miles down the squiggly mountain road from the small town of Yarnell.  I didn’t become aware of the fire until Sunday, June 30, 2013.  I stepped outside my house at North Ranch and just happened to look North up the mountain.  Smoke was thick and a long ragged line of fire rimmed the ridge.  It wouldn’t have taken much for it to come off the mountain and sweep through the desert.  I thought about that a lot as I turned on the news only a few minutes later and heard that the wind had changed just about the time I saw the ridge burning. 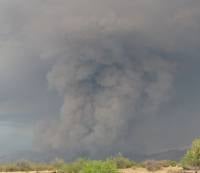 With the relief that the fire wasn’t coming this way, came the immediate heartbreak that in that very wind change, 19 of the Granite Mountain Hotshots out of Prescott had been trapped and died.  The 20th member, a lookout, was whisked out of harm’s way at the last minute.  It took a few minutes for that all to sink in.  No, not 19 beautiful young people who were doing their jobs hand-cutting firebreaks along the fire flank.  The fire came over the mountain ridge and within a few seconds trapped them in a bowl.  It was unthinkable but it was true.  Some were found in their protective shelters, some didn’t get that far, but all were overcome, huddled in a hollow between two ridges, friends and co-workers in life, together at the end.

The Yarnell Hill Fire was ignited by a lightning storm on Friday, June 28, 2013, eventually covering roughly 13 square miles.  Thunderstorms up in the Rim Country and near Prescott influenced the massive air downdrafts with huge gusts of air and reversing winds.  Low humidity, high temperatures and the extremely dry bushes and low growth terrain produced acres of dense fuel within the huge boulder-ridden hills.  The southwestern winds gusted at 15 to 25 mph at 4:01 p.m. and an hour later, winds were gusting at 30 to 47 mph from the northeast.  Planes criss-crossed the fire zone with slurry and water but nighttime and winds controlled their flights.

Residents of Glen Ilah on the west side of Route #89, the rest of the town of Yarnell, as well as Peeples Valley north of Yarnell, were evacuated to shelters in both Prescott and Wickenburg.  Many sought refuge with family or friends.  Conditions changed so quickly that residents had very little time to gather their animals and leave with the barest of necessities for an immediate evacuation.  It was days before they knew whether their homes had been destroyed by fire. 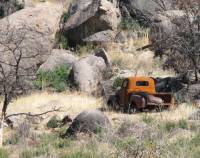 Peeple’s Valley residents were allowed home first without loss of structures.  All residents of Yarnell returned a few days later. The wildfire was fully contained by July 10.  Our church was safe on the east side of Highway #89 as were other residents and businesses but several of our members were not so lucky with the loss their homes in Glen Illah on the west side of the highway.  The businesses along the street were not as affected but as many as 127 houses and structures that were tucked into the boulders of Glen Illah were destroyed.

Fire is strange.  It tends to flit from one area to another.  I was gone for 2 ½ months, leaving the day that Yarnell residents were allowed to return, so I didn’t see the affects until I returned in mid September.  It was amazing that one home was burned to the ground with little left but cement while next door, or across the street, a home or building survived untouched.  Our church couldn’t be used for services for several weeks as many agencies used the building to help the fire victims.  Countless volunteers worked to find shelter, food, and whatever else was needed for those who had lost everything.

RVs of various kinds were donated for people to live in at least temporarily but most of them needed much repair before they could be used.  It was amazing how so very many people stepped forward to help in any way they could…and they still are helping in amazing ways.

Thousands of people lined the highway to honor the fallen firefighters transported in nineteen hearses and accompanied by motorcycle escorts and a fire engine.  The 80-mile procession from Phoenix took them beyond Wickenburg and North Ranch and on up the mountain and through Yarnell, then to a memorial service and burial in Prescott.  The world was watching this sad procession via television.  Memorial services will be held this weekend in both Yarnell and Prescott.

Along with the inevitable problems and blame games that surface in a tragedy that affects so many people, there are kindnesses and a joyfulness that arises to warm your heart and those beautiful nineteen firefighters– they will never be forgotten.  God Bless until next week.