You are here: Home / Blog / The Silver Gypsy: Unusual Sightings
This post may contain affiliate links or mention our own products, please check out our disclosure policy here.

by Sharlene Minshall - The Silver Gypsy
April 2, 2014Filed under: 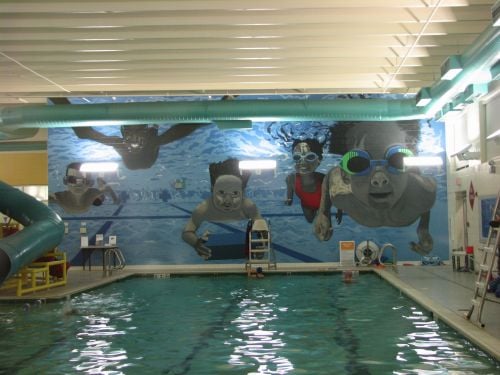 My 2½-month trip to VA, MI, and WA last summer/fall was so much fun.   I was fortunate enough while staying with my youngest, Tracey, and her family in VA, to be able to go to their Jamerson Family YMCA several times.  This 63,000 sq ft. facility that opened in April of 2002, has a pool where the water was always warm enough to walk right into, and depending on my choices, there were usually few other people swimming.  My grandson was able to join me a few times which made it all the better.   What intrigued me most was the magnificent mural on the wall.  I never tired of looking at the beautiful faces of those children swimming underwater. 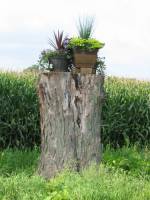 I rented a car to visit the relatives and friends for my 10 days in MI.  Some of those road trips took me into the MI countryside alone and I found myself stopping in the middle of the road to take unusual photographs like that tall split stump with the flowerpots on it.  I was way out on to a back road going through tunnels of magnificent crops of corn when I rounded a corner and there it was.  No barns, houses, or yards nearby; just a lovely hello in the countryside on a beautiful morning. 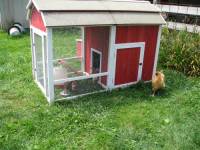 The red building is a chicken coop or hen house that belongs to my former MI neighbors.  Bob built the house where the chickens would be safe and can mostly lay their many eggs in peace.  However, occasionally a raccoon will force his way inside and get both chickens and eggs.  Noushi collects the eggs and this year with Michigan having such a winter deep with snow, she has had to have a path shoveled for her to make her daily run.  They always manage to have the most beautiful garden and a whole menagerie of animals.  We always loved to tease Bob about being given a “free” pony for whom he had to build a sizable fairly-expensive barn. 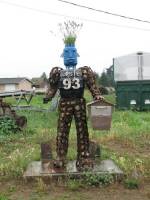 Janet and I drove more or less aimlessly around Sequim, WA, just to see what was there since this is one of the places I’m contemplating moving to when my house sells.  I do not know what the “Gupster 93” is but someone put a lot of work into creating him.  To top him, they grew a garden on his head.  That takes imagination.

It took returning to my own deck here at North Ranch to see this big critter.  I have only seen one other here in Saguaro Park although they have been seen often in other parts of NR.  This picture was taken by my neighbor, Don Heasty, who is not only a good photographer, but very specific.  He says, “As you probably know (but many people don’t), Javelinas aren’t ‘pigs.’  Javelinas and domestic pigs are only related in the same way they’re related to cattle; they’re all even-toed ungulates.”  Later he wrote, “I hope you put in a good word for Javelinas.  They’re not as aggressive as some people think, except when threatened by dogs.”  Since many people walk the path through Saguaro Park with their dogs, it is necessary that they realize we have one brave and big critter doing lunch at various times. 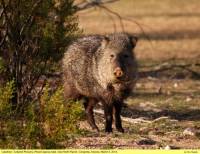 We have a lot of interesting “critters” at North Ranch but I’m not going to get into gossiping about my neighbors!  (Just kidding!)

I’ll better quit while I’m ahead.   God Bless until next week.