You are here: Home / Blog / The Silver Gypsy: Wisdom vs. Bills
This post may contain affiliate links or mention our own products, please check out our disclosure policy here. 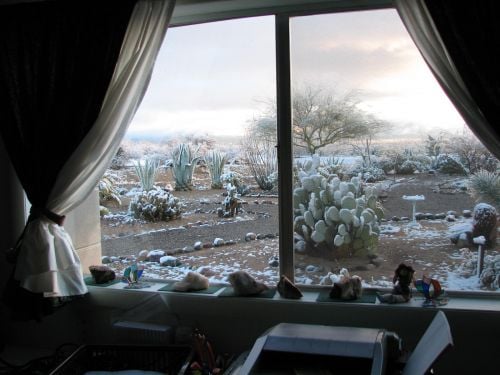 I bought into North Ranch when it was first available in the early 1990’s but later moved to this current lot near the desert’s edge and backed up against Saguaro Park.  All the 50’x70’ RV lots came with a 10’x12’ shed.  After acquiring a new park model in 2005 and having a sunroom added in 2006, I spent less time traveling and more time on this tiny bit of desert heaven overlooking the Bradshaw Mountains. 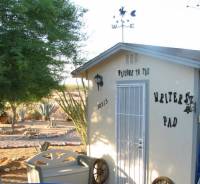 The previous owners had fixed up the shed into a nice room so I made a few changes to make it mine and turned it into a living, breathing office.   A small back window was removed and planted on the south side of the building and a 3’x9’ window grew over my built-in desk.  I could watch each season as it came into view.  Big back cutout letters around the top of the door proclaimed to all who might enter, “Welcome to the Writer’s Pad.”

To further make it mine, a sign announced, “There will be no crisis this week, my schedule is full” and another that was a four-piece puzzle with one piece missing that unashamedly declared, “I’m not a complete idiot, parts of me are missing.”  That little touch summed up my life spectacularly.

Over the years, I planted trees, rocks, and cactus on the lot to create a cooler atmosphere.  I loved the aesthetics but it didn’t make an iota of difference in the electric bill.  Heavy-handed heating and cooling bills for both office and house brought me to the decision to bring my office inside the house last fall and set it up in the living room.  I added a wooden file cabinet on wheels ($20 Habitat for Humanity Store).  A friend put together a new corner desk and another renovated a straight desk.  Put together, the office is nicely separated from the rest of the room and I find that rather than thinking twice about making the effort to go outside, unlock the office, and turn on the machines, I can just sit in my rolling office chair whenever a spectacular thought bounces into my head. 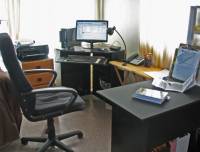 While it is terrific for convenience, I have lost something highly valued.  The path to Saguaro Park went right by my 3’x9’ window.  If I saw someone I knew coming down the path or if they tapped on the door or window, I went outside for conversation.  My inside office still overlooks the path but it is further away and somewhat blocked by a tree.  I rarely notice people on the path and if I do, they can escape before I get outside.

That might not seem like a big-deal problem but talking with other RVers or once-upon-a-time RVers, have always inspired to me.  Where else could I get this traveling wisdom?  I once asked Bill and Betty Jones, who almost every summer volunteered at lighthouses along the Oregon Coast, what they were doing that particular summer and he replied with a grin, “We really don’t know, our schedule is written in jello.”

God Bless until next week.

Winter in the Wilderness, the first e-book novel published by Minshall, is offered hrough Amazon and most Internet book sites.  A print edition may be obtained from Amazon or you can order an autographed copy from the author at Box 1040, Congress, AZ for $7.95 plus $3.50 for postage and handling.  The fourth edition of RVing Alaska and Canada is available through Amazon.com.