You are here: Home / Blog / The Silver Gypsy: Yarnell Daze 2014
This post may contain affiliate links or mention our own products, please check out our disclosure policy here.

by Sharlene Minshall - The Silver Gypsy
May 28, 2014Filed under: 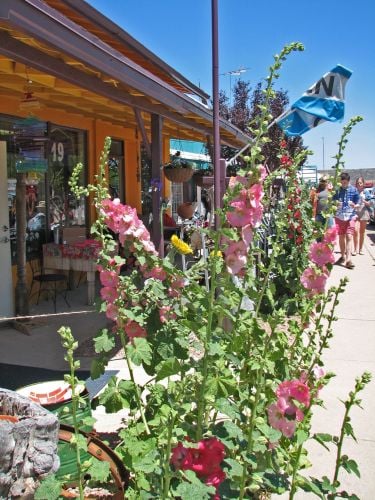 The yearly Yarnell, Arizona, “Mountaintop Festival” was held on Saturday, May 10.  All the vendors, markets, and anyone with a booth were already set up for business and the parade started at 10 a.m.   Yarnell’s Jerry Florman spearheaded the committees and individuals, and kept the whole program going (no small feat) with Arts and Crafts and Antiques Vendors, Car Shows, Firefighter Relays, Juried Art Show, and a Kids Zone with games and fun and that was only a taste of what was offered. 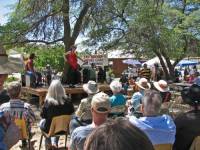 This was a celebration of the Yarnell community “rising from the ashes” since the Yarnell Hill Fire of June 30, 2013 as people build new homes or renovate what was left.   A Memorial was offered for the 19 firefighters who lost their lives during that fire with a ceremony following the parade.  Later, a Local Firemen’s Relay was held with firefighters from Yarnell and Peeples Valley, a fun battle to show off their strength and skills.  Their anticipated crowd of at least 3,000 was more than satisfied. 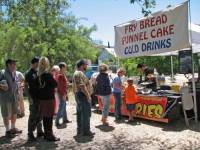 I walked through the Art Show Entries at the Blue Barn.  An Awards Ceremony was held after everyone had a chance to vote and a steady line of people sauntered through it.   We have some very talented artists and photographers in our area of Arizona.  Various activities and programs took place throughout the day.  “Lovely Buttons” the Clown Show was at the library and followed by the Kidz Zone Fun Games at the Community Center.  A hypnotist performed at Vendor’s Field and a talk was given on Iris Gardening at Dan’s Iris Gardens. 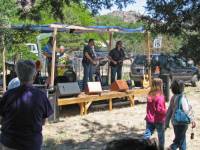 A Beer Garden with live music and food was very busy and homemade ice cream was available in several places.  They had some nice shady trees although, fortunately, it wasn’t a super hot day.  Actually, it was perfect for walking around, taking part, sitting and listening, and meeting up with friends.  Several Pedicabs, plus two small buses, were at the ready for anyone who didn’t want to walk the entire street.  I took a Pedicab ride up to the other end of the street to watch the flamenco dancers at the Easy Listening Stage. 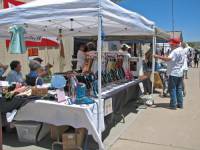 At that end of the street there were booths of jewelry, homemade yard items and wind whirligigs, T-shirts, Kettle Korn, Hot Pastrami and Beef Dip, Fry Bread, and Funnel Cakes, certainly enough to keep from starving while you walked to another area.  They also offered gold panning, a car show, and rides to the St. Joseph Grotto, that thankfully, was not totally destroyed in the fire. 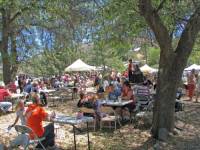 It was a typical small town gathering of friends, family, and strangers who might become friends.  A whole lot of eating, drinking, hand holding, puppy holding, baby shushing, and swaying to lively music happened under those shade trees.  In my opinion, there is no better way to spend a beautiful spring day.  Maybe you can make it to Yarnell Daze 2015.  God Bless until next week.