You are here: Home / Columns / On the Road for Good / The Simple Life
This post may contain affiliate links or mention our own products, please check out our disclosure policy here. 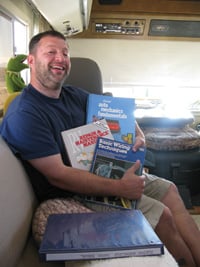 Dennis says Jeanette is responsible for all the fun they’re having on the road. “She’s the adventurous one,” he explains, as he looks at her and chuckles. As a 39-year old web applications developer, this Rhode Island native never thought he would do anything other than buy a house, have a good job and maybe raise a family.

“I was one of those scared-of-change people,” he explains. Dennis likes routine and in his previous life, the daily ritual of going to work was comforting to him. But during one eye-opening vacation in Central America, the couple experienced the contented, laid-back mind-set of the Costa Rican people, and started to take a closer look at their own consumer-minded, work-driven life.

“We both decided we didn’t need everything we had,” he said. “We got sucked into the ‘keep up with the Joneses’ lifestyle, and that really wasn’t us.”

Jeanette added, “When we were in Costa Rica we realized how simple life could be, and we wanted that for ourselves. Just living simply on less and doing more. We said we don’t need all this; we don’t want all this, and we want a simpler life. But it took a few years for us to get into RVing. It was a slow and gradual realization that this was the answer to simplifying.”

Forming a Plan
When Jeanette suggested moving into an RV, Dennis had a hard time envisioning the switch, but he had a gut feeling that something more fulfilling was just down the road. Jeanette on the other hand was comfortable with a nomadic lifestyle. This 37-year old graphic designer and California native was raised by an outdoorsy dad who roamed the West in his RV while working as a county fair concessionaire and taught his daughter how to camp, hunt and fish. Change was always a part of her life, so she cautiously attempted to explain all the benefits of mobile living to Dennis—including her idea for supporting their lifestyle by starting a location-independent graphic and web design firm (MotorhomeOfficeofDesignAndTechnology.com).

Dennis eventually agreed and together they purchased their first RV, a 1988 Lazy Daze Class C motorhome that they nicknamed “The Cheddar Yeti.” The RV was so affordable that they paid for it in cash, which meant that if they discovered RVing wasn’t for them, they wouldn’t suffer a huge financial loss. After improvement projects that included replacing the carpet with linoleum and installing new kitchen faucets, these enterprising individuals hit the road in early 2010 and began blogging about their adventures at cheddaryeti.com.

The Yeti hauled Dennis, Jeanette and their cat, Cleo, all across America in years of unforgettable travel. During that time, the well-loved, but quirky RV forced the couple through numerous crash courses in DIY repairs, but, in return, they acquired the gifts of patience and mechanical aptitude that would prepare them well for their next RV. For the first time ever, Dennis owned more than a screwdriver, and he gained the confidence to tackle increasingly difficult RV repairs. When the jobs on the aging motorhome grew too costly and complicated, they faced their next a major decision: should they buy another rig or return to their old way of life?

“We looked at each other and we said, ‘Do we love RVing?’” Jeanette recalls. Both agreed that their road trip wasn’t over, and it was time to move up to their next rig. 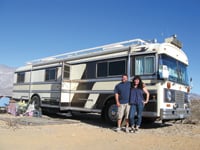 The couple gave careful thought to their future home, pinpointing features that were important to them. Jeanette says, “We asked ourselves what could we afford that would be better than what we had.” They wanted a workhorse rig that was solidly built, and affordable enough to buy with cash.

The answer came in the form of a 35-foot 1978 Bluebird Wanderlodge bus in pristine condition with its original interior, including window coverings, a built-in countertop blender and even a wall-mounted intercom system. This diesel-powered rig was the best in its day and now that it was listed at $19,000, the price was right.

The instant appeal caught them both by surprise. “I never would have said, ‘Oh I need a vintage bus,’” said Jeanette. But her designer sense fell in love with the clean lines and simple interior design, while Dennis was reassured by the stacks of original documentation, blueprints and manuals the owner provided. They jumped at the opportunity to buy it and in November 2012, they hit the road and drove the Cheddar Yeti II into dizzying New York traffic. Dennis was behind the wheel for a terrifying white-knuckle drive through impossibly narrow lanes on the Brooklyn-Queens Expressway. Like all good RV mishaps, Dennis can laugh about it now and proudly states, “If I wasn’t a man before then, I’m a man now!”

Going from a typical motorhome to a solid machine like the Wanderlodge was an entirely new experience but one they are enjoying. “It’s nice to learn from something that’s so simple and beautiful, not something that’s complex,” says Jeanette. Although the Wanderlodge has its fair share of peculiarities and necessary upgrades, “it’s not such a one-of-a-kind piece that you’re on your own (figuring things out),” says Dennis.

“The community that comes along with owning a bus has been a huge help,” Dennis explains. Vintage bus owners willingly supply tips on everything from where to buy affordable tires to locating trustworthy repair shops. Thanks to the Internet’s numerous discussion forums and clubs for vintage bus owners, and a stack of mechanical manuals, the couple is ready for anything.

“Sometimes a 1978 bus is not as simple as some other options,” Jeanette says. “But it actually has been a good way for us to slow down and grow, and have more ‘still time’ in our life. It’s an opportunity to reflect as we’re driving 20 miles per hour up a grade—we can stop and smell the roses, whether we like it or not!”

Rene Agredano and her husband, Jim Nelson, have been full-timing since June 2007. As working full-timers they love showing others the benefits of the full-time RVing lifestyle by chronicling their adventures at LiveWorkDream.com.