You are here: Home / Columns / Silver, Single and Solo / The Sprinter’s New Groove

Consideration wasn’t a one-way street. He always had his favorite Lubrigas cocktail, and he absolutely purred when I gave him a bath and a rubdown. He has gruffly apologized for the inevitable problems of aging, and moments of extreme jealousy. As we speak, he sneers and both headlights snap with indignation.

“First the Cavalier, now this!”

Sprinter, you can’t complain about the hot little red car. Cavy stayed home all last spring through fall while we traveled the Olympic Peninsula. We visited Hurricane Ridge, and spent days on South Beach watching the tide go in and out. We had a terrific time.

“Yes, but when we came back to Arizona, he was still here! And what is this box you’ve come up with now?”

The Georgetown may be a half-foot taller and wider than you are, but he is a half-foot shorter and definitely not as handsome. You are the one with the distinctive black rock guard on the front bumper. That makes you unique.

“That’s supposed to make me feel better? I can read the printing on the pavement. I see that Blue Ox folding hitch on George’s bumper, and you were so excited when you discovered ‘that car’ was towable. George is going to pull Cavy to all your eastern adventures this year. So much for loyalty.”

Well, Sweetie, even though your original Chevy 454 engine is still perking right along at 226,550 miles, I think your major traveling days are numbered.

“So what does George have that I haven’t got.”

He doesn’t have anything more than you, but all of his works! Now, how about your retiring in a desert setting to watch sunrises between the saguaros. Maybe you could be a fisherman’s retreat beside a roaring mountain stream or a peaceful lake. You’d like that wouldn’t you?

You’ll have memories to share. Look at the mishaps we’ve survived together. I should have considered the fly/drive package offered from Fairbanks, Alaska, to Prudhoe Bay, but we had traveled all the other major gravel and paved Alaska roads and I thought you should do that one, too. And didn’t we have a magnificent time camping in the fall colors along the rivers?

“You’ve obviously forgotten that enormous furry rag mop with paws that walked his way along my muddy derrière.”

I remember. It makes a great story to tell my Life on Wheels students.

In addition to your obvious charms, Sprinter, you have some splendid features. You have three solar panels, four house batteries, a 2,000-watt Trace inverter, a reasonably new refrigerator, and a three-brick propane ceramic heater.

“You’ve rearranged my insides so nobody would recognize them.”

That’s what I do best, rearrange. I’m a woman. We rearrange lives, schedules and furniture. In your case, I rearranged your interior drastically over the years to accommodate my office equipment and comfort zone. My first office was on your bed pedestal because I was short enough to stand upright on it. Later I reclaimed that area for sleeping, tore out the vanity table and had shelves and a desk built in. Even later, I took out the couch and built a table by the window where I could look outside as I created. The bunk over the driver’s seat was dismantled when it buckled from storage weight (not me).

“You don’t send me flowers any more.”

You don’t sing so well either.

“You hurt me to the radiator core.”

At least you have a new one—it was replaced twice, along with your transmission.

Overall, you’re in pretty good shape for the shape you’re in.

“You’re not so bad yourself. I could go for a chick like you…again.”

“With everything replaced, why are you forsaking me?”

It’s not a matter of “want-ing” to leave you. I’m single and I have three RVs. Something is wrong with that equation. I really thought the RVIA might have you bronzed for the RV Hall of Fame, but they say you’re too big. Life isn’t fair.

Well, Sprinter, this is it. I’m going to leave you here at the Congress Trading Post to await a grizzled miner or a backwoods hunter. I am sure someone will adopt you. I’ll stop back after I pick up today’s mail.

An hour later at the Trading Post, I ask Ed where the Sprinter is because I have come to say goodbye. Ed says, “Right after you drove away, a gorgeous blonde with an RV Tech School diploma gave me a check and they took off together. She was young and curvaceous and had the longest eyelashes and the biggest…”

Yeah, yeah, so much for loyalty all right.

In all this, there are three things to learn.

Lesson #1: When I traded in my mini-motorhome for the new Sprinter in 1987, the salesman said, “It is better to trade RVs between 55,000 and 65,000 miles. After that people are a little leery about buying someone else’s problems.” I was tempted to see just how long the Sprinter would run, but the Georgetown became available at the right price.

Lesson #2: Never animate your RV. Over the years, the Sprinter has taken on a life of his own. When friends (and sometimes strangers) look over the pristine 1999 Georgetown, who has only 19,000 miles, they give me that dismayed look and say, “But what is going to happen to the Sprinter?” It’s amazing how much animosity can be stirred up by a box whose loyalty only lasted until I turned a corner.

Lesson #3: No matter what you’re driving or pulling, enjoy every moment and laugh a lot.
God Bless. 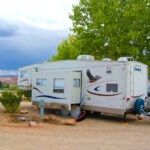 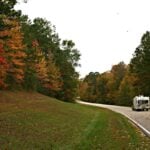 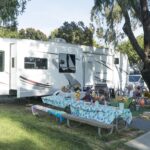