You are here: Home / RV Trailers and Motorhomes / The Teardrop Still Thrives
This post may contain affiliate links or mention our own products, please check out our disclosure policy here.

I don’t know who invented the teardrop trailer, but it has endured the test of time. Magazine articles from the 1930s show photos of art deco teardrops with outdoor kitchens that fold open, just like teardrops built today

Most of the early teardrops were do-it-yourself projects. It wasn’t until after World War II that companies began mass production, using war surplus materials, including wheels from Jeeps and aluminum from the wings of bombers. The popularity of the little trailers waned in the 1960s as RV buyers moved to larger travel trailers and motorhomes, but teardrops made a comeback in the 1990s, and they can be seen on the road everywhere today.

Teardrops are popular because they provide the camping basics: a place to carry your gear, sleep inside away from the elements, and cook outdoors. They don’t have bathrooms or showers, and you can’t stand up inside, but they are sleek, small and light enough to be towed by just about any vehicle. 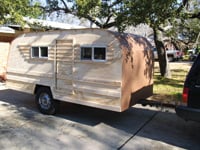 No one has capitalized on the renewed interest in teardrops better than Little Guy Worldwide of Massillon, Ohio, which has built thousands, in a variety of sizes, with names such as Silver Shadow, MyPod, T@G, and Little Guy. The company also builds the T@B, which has the teardrop style, but is big enough to stand up in and can even include a bathroom.

Home-Built Creations
You can buy a well-built, well-equipped teardrop for prices starting under $10,000, but some people (not me) would rather build their own. I took woodshop in the seventh grade and feel lucky to have emerged with all my fingers intact and a crude matchbox holder that tested my parents’ ability to bestow undeserved praise. But then there are people like Hal Heintz who find fun building trailers as a hobby. 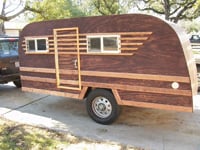 Heintz, who lives in San Antonio, Texas, learned to repair runways in the Air Force and when he left the service in 1971, he intended to become a heavy equipment operator. But he couldn’t find a job and heard about an apprenticeship training program run by the carpenters’ union. He enrolled and proved so adept at carpentry that he was earning journeyman wages in three months.

A career as a master carpenter and project supervisor took him through construction of houses and commercial buildings and into a job for 23 years as director of property management for a large Christian church and school. Currently, he is director of workforce development for the Associated Builders and Contractors (ABC) in South Texas. He was the ABC’s national craft instructor of the year in 2005.

On a Labor Day weekend in 2004, Heintz was riding his motorcycle in Cottonwood, Arizona, when he came upon a group of teardrop trailers. About 40 to 50 homebuilt trailers were gathered in a campground, and Heintz was fascinated. “I was in a candy store,” he said.

He went home and starting building his own teardrop at his house, and found it was not that difficult to do. Take some sheets of four-foot-by-eight-foot plywood, lots of screws, a few hand and power tools, and any person adept at carpentry can build a little trailer, Heintz said. You can acquire plans and kits to put one together, but that’s not Heintz’s approach. He builds his from scratch.

His first model was a teardrop with Texas décor, symbolized by a Texas longhorn on the back and a lone star on the side. When Heintz finished it, he put it on craigslist.com and quickly found a buyer in California’s Napa Valley. The buyer was attracted by the Texas theme because she had sons named Dallas and Austin.

Since then, his pattern has been to build a trailer, use it for a while and sell it to get money to build another. It’s not a moneymaking venture for Heintz, but rather a way to use his skills as a craftsman.  You can see his expertise in the attractive little trailer he built as a perfect match for the Jeep he uses to haul it. 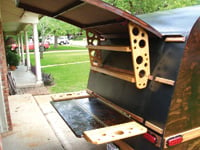 Heintz said he builds his trailers on a whim—no pattern or elaborate planning. Each one is different. He started with the classic teardrop design of a curved top, but then went to a canned ham design with angular corners and a flat top. And besides building the traditional eight-foot camping trailer, he has built a 12-foot model that beautifully showcases his woodworking ability.

Heintz describes his trailers as “rough house” models. He doesn’t put in the amenities you would find in a trailer bought from a manufacturer. No running water, sink, stove or refrigerator.

Not even the big 12-foot-long model is tall enough to stand up in, though it does have room to not only sleep inside but also sit down and eat. Heintz said he keeps his trailers small because they are designed to be kept in a garage. While they are water-resistant, they are not built to withstand years of outdoor exposure to sun and rain.

His trailers, like many teardrops, are, above all, cute. He can pull up in a campground beside magnificent luxury coaches, and the RV attracting the interest of onlookers will be his.

“My wife tells me I have more fun building them than using them,” Heintz said, and that’s true, though he likes to go camping, too. For him, teardrop-size trailers provide the perfect camping experience. They give you a place to sleep in comfort, but otherwise you are outside, whether cooking or just sitting in a chair enjoying the sunset.

Heintz has another reason for building trailers, and it’s connected with his job overseeing the training of the next generation in the building trades. He uses his trailers to show students what can be done when you have acquired the skills of a craftsman.

Heintz is working on his seventh trailer and no doubt more will come, but he isn’t interested in building one to anyone else’s specifications. 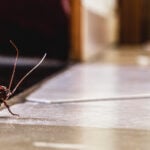