You are here: Home / Top Stories / Three’s Company When Full-time RVing with Relatives
This post may contain affiliate links or mention our own products, please check out our disclosure policy here.

The nomad life felt like a natural fit for Maya and Ryan. Back when they started, full-time RVing with relatives just wasn’t on their radar. With a few years of travel under their wheels, things were rolling right along in a small Class C RV as they explored the U.S. and discovered ways to support their lifestyle. But when Maya’s mother’s health declined in 2017, everything changed for these minimalist lifestyle advocates. Today, the trio is traveling together and giving Maya’s mom a lifestyle that’s the envy of many home-bound seniors.

The Unexpected Joy of Full-time RVing with Relatives 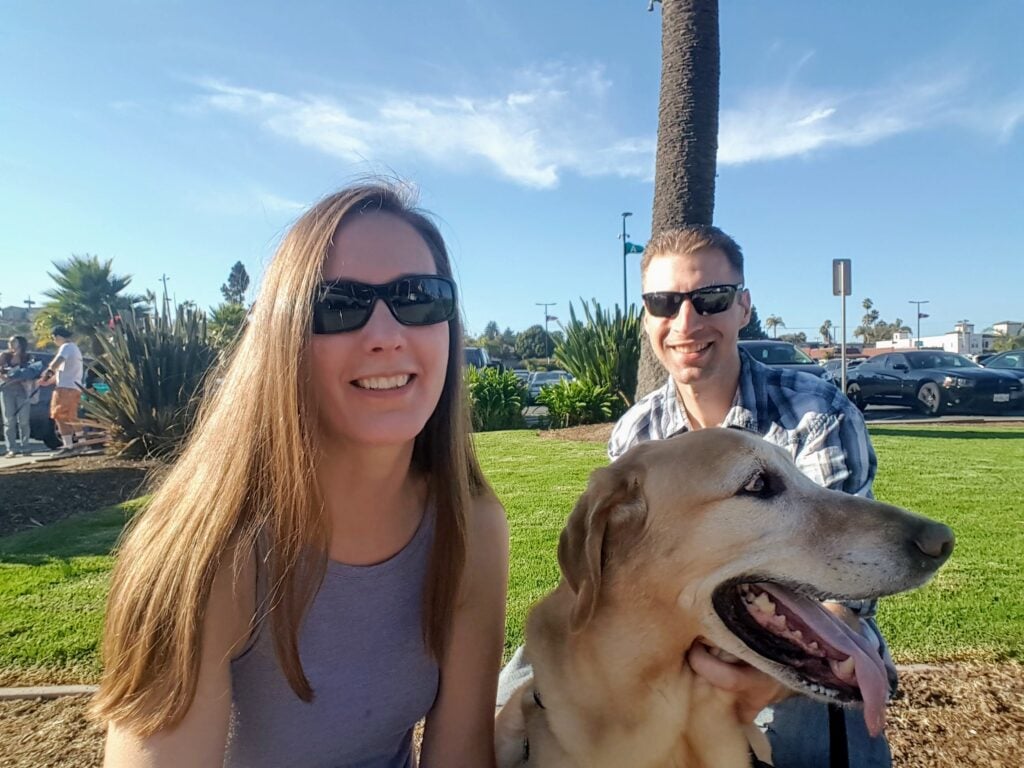 Two years ago, Maya and her mother lived on opposite ends of the country. Maya and Ryan roamed the west in their car-free RV lifestyle, and Joan enjoyed a quiet life in her remote cabin perched in New York’s Catskill Mountains. The property was Joan’s retirement dream. “It was quiet and filled only with the noises of the animals like bears, deer, doves, squirrels, chipmunks,” Joan explains. “It was the home that I retired to and I loved it very much. But I was told that I couldn’t live alone any more due to my health.”

Joan’s diligent daughter Maya visited and helped with her mother’s health challenges. But she needed a permanent solution. Joan would have to move closer to the family. Convincing her mother to switch lifestyles didn’t happen overnight, says Maya. The simple living evangelist and creator of The Gradual Minimalist lifestyle movement was forced to initiate long, challenging conversations with her mother about the benefits of downsizing and living closer to West Coast relatives.

Off to California (and Beyond) 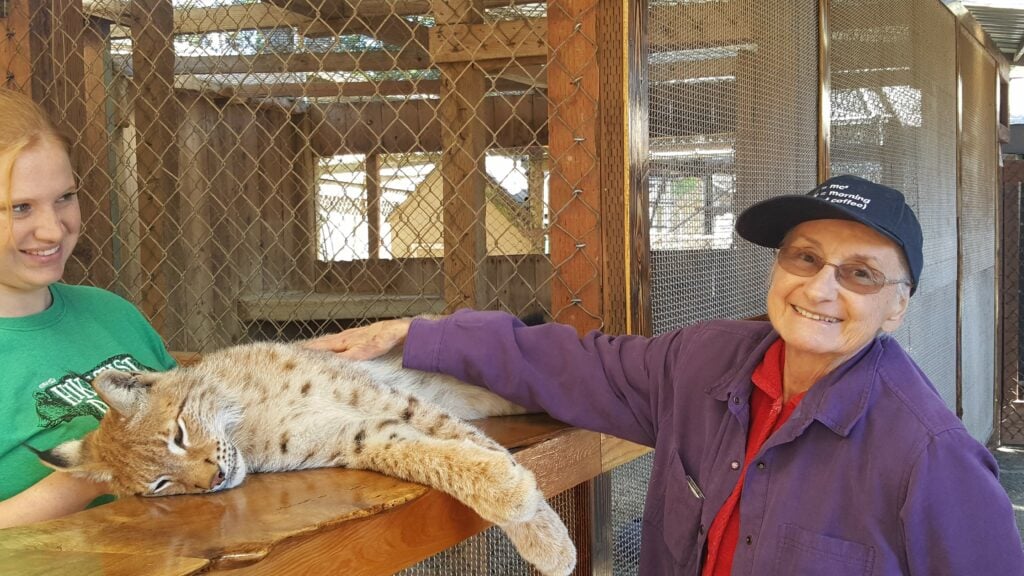 At one point Maya asked her mother “If you could travel anywhere on this continent, where would you want to go?” The answer: to finally meet her young grandchildren in California. Maya agreed the trip would be a good idea, but Joan would have to let go of her retirement property, become a Californian and live with her son. The idea wasn’t exactly met with enthusiasm.

“We also had conversations about how much stuff do you actually need? We talked about valuing people over things. Eventually she got to the point where she was willing to move out,” said Maya. Gradually, Joan downsized her life over the next few months. Soon she was ready to travel and move in permanently with her son in Northern California. The trio, along with three cats and a dog, began an unforgettable cross-country journey in Maya and Ryan’s small Class C Leprechaun RV. Joan describes that first RV home as “terrifyingly small.”

“I was unsure of how I would be able to adjust to it but after a little while on the road, it became easier,” explained Joan. Traveling from coast-to-coast introduced her to an unconventional lifestyle that she hadn’t ever considered. From Lake Erie in New York to the Oregon coast, the traveling family enjoyed an unforgettable adventure. 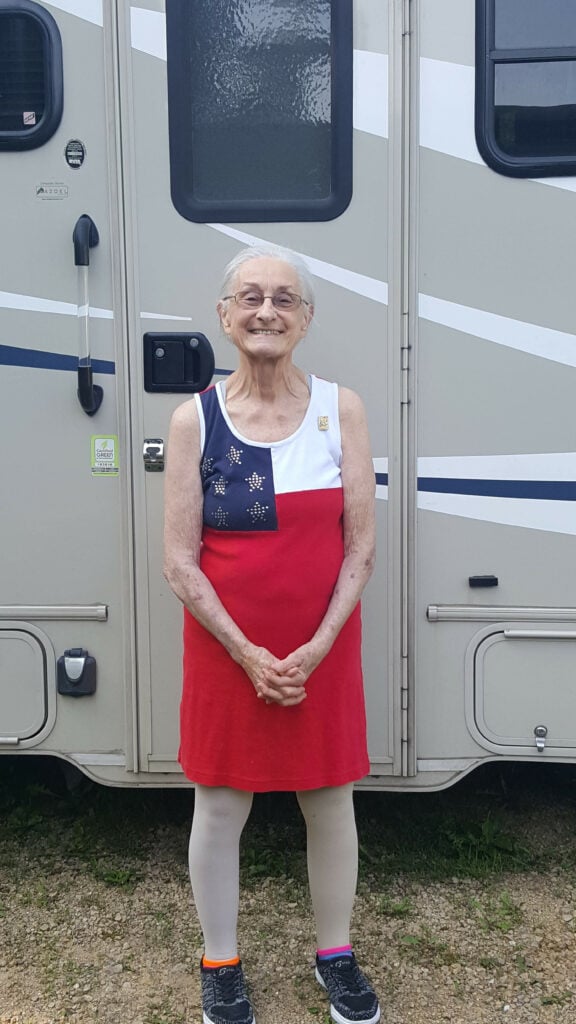 On the road for the first time.

“My most favorite stop of all was the Wildlife Animal Safari Park, where Maya and I petted a baby leopard and other wonderful animals. The drive along the Oregon and California coastline, on our way to South San Francisco, was also magnificent. All in all, I am very happy that I saw such wonderful towns, cities and waters along the route,” says Joan.

They arrived in Northern California and as planned, Joan moved in with her son. But the genie was out of the bottle. Joan was so much happier when she was traveling.  A few months later, Maya and Ryan agreed that Joan should live with them – but definitely not in their Leprechaun. “It’s a 150 square-foot studio apartment on wheels,” wrote Maya in her blog. “It worked for a month while we took her on a trip. But it was starting to wear thin towards the end; therefore it’s a shortcut to driving us all insane if we tried to live in it.”

Reversing Minimalism for the Greater Good

The path to sanity appeared in the form of a two bedroom, 1.5 bath fifth wheel RV. A better description would be the RV with a mother-in-law apartment unit. It was bigger and a totally different way of RV living from Maya and Ryan’s smaller RV. But the rig was a no-brainer with mom along for the ride. It’s a much larger rig than they ever imagined for themselves. But the size gives everyone on board enough space and privacy, whether they’re traveling to a destination or staying parked in a monthly spot. “I am never alone but I still have lots of privacy,” says Joan. 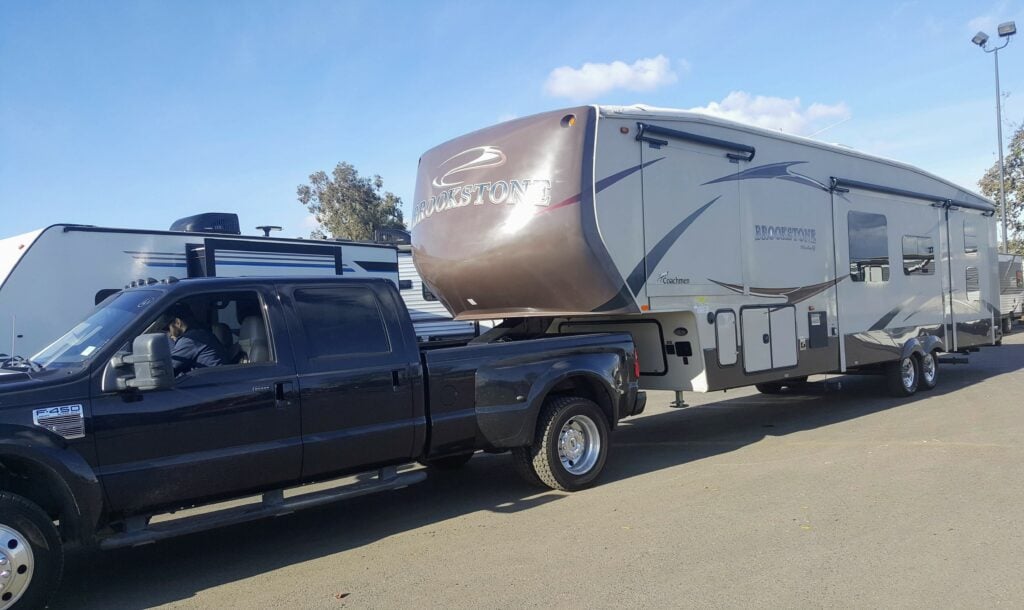 The fifth wheel with a Mother-in-Law apartment.

For most people, the thought of full-time RVing with a parent is inconceivable. But these two minimalists are definitely not most people. Free of the anxiety Maya felt when leaving her mother in a place where she had little contact with the outside world, the couple now enjoys the dramatic change in her lifestyle and theirs. Maya wouldn’t have it any other way. “This is my mom. She did all of the raising,” she writes in her blog. “I owe her one, and she needs me now.”

Joan, meanwhile, relishes every new experience that the lifestyle has given her. Adapting to it took time, but overall she says she’s loving it now. “I realized how much freedom there is in an RV life,” she says. “You can set your own schedule to suit yourself, you don’t have to rush anywhere (except for medical appointments) and you can see what you’d like to. Most importantly, though, what made it easier was having the loving company and care of both Maya and Ryan. They are deeply concerned with my well-being, for which I am very grateful.”