You are here: Home / Blog / Tiger, Meet My Sister
This post may contain affiliate links or mention our own products, please check out our disclosure policy here. 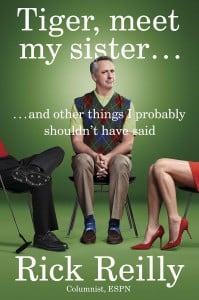 Tiger, Meet My Sister, and other things I probably shouldn’t have said, is the latest book by award-winning writer Rick Reilly. The book’s title comes from golfer Tiger Woods’ devotion to women – all women! It’s a collection of Reilly’s best columns written while at ESPN.com and ESPN The Magazine between 2008 and 2013.

The columns are published as they originally appeared, and Reilly has added short postscripts to most. This is a potpourri of all kinds of Reilly columns, including the tear jerkers, the sentimental, the angry, the funny, and the controversial. The columns cover everything from Lance Armstrong and his lies to Tiger Woods and his temper. They’re about everything from a stud high school quarterback who eats lunch every day with the bullied Down’s Syndrome girl to the blind Yankees fan who commutes two hours each way to every game.

With a new introduction and updates from Reilly on his most talked-about columns, as well as his expert opinion on athlete tattoos, NFL cheerleaders, and running with the bulls in Pamplona, Tiger Meet My Sister showcases an unparalleled sportswriter at the top of his game.

An 11-time national sportswriter of the year, Rick Reilly is a contributor to ESPN and a frequent guest on SportsCenter and Monday Night Countdown. His is the author of 11 books, including the New York Times bestseller Hate Mail from Cheerleaders, Missing Links, Shanks for Nothing, and Who’s Your Caddy? He was inducted into the National Sportcasters and Sportswriters Association Hall of Fame in June 2014.

A final note on Tiger, Meet My Sister: If there can be one knock on this book, it’s that it is not a new book, but rather a compilation of Reilly’s previously-published columns. Though entertaining to read, adding a postscript to his ESPN.com columns published several years ago is nothing more than a repackaging of the old. If you haven’t read anything by Reilly, they will be entertaining, but if you have, you’ll be disappointed.

The book is available at all major booksellers.