You are here: Home / Top Stories / Meet The Tin Can Tourists Vintage RV Club
This post may contain affiliate links or mention our own products, please check out our disclosure policy here. 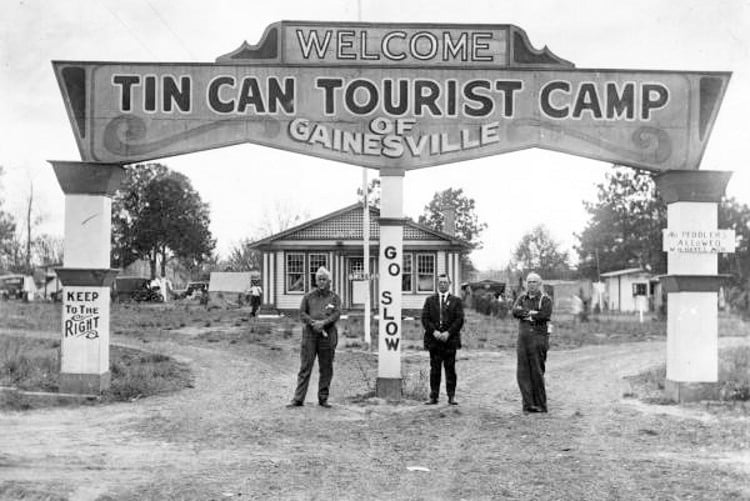 From Ace to Zollinger trailers, vintage RVs are wildly popular with modern RVers. Nowhere is this love affair more apparent than among the ranks of the Tin Can Tourists, a vintage RV club for all makes and models of towables and motorhomes.

The Tin Can Tourists vintage RV club dates back to the dawn of the automobile age. Henry Ford had just invented the Model T and to promote auto tourism, The Smithonian Magazine says that Ford regularly road tripped with friends like Thomas Edison, Henry Firestone and an entourage of camp sherpas. As the group’s travels made headlines, it didn’t take long for every day people to catch onto this new “car camping” idea. Soon, Americans began developing ingenuous ways to turn their Model T “Tin Lizzies” into rolling homes.

“People would rig their cars up with folding side tents or convert trucks with sleeping arrangements in the truck bed,” the Tin Can Tourists share on their website. Their RVs would be considered crude by today’s standards but traveling with food and sleeping quarters was exciting stuff back then.

But in the early 20th century only the wealthiest Americans could afford to take time off and travel. The Tin Lizzy vagabonds were a small segment of society and the average person often looked at them with suspicion. In 1918 a few of these wandering travelers gathered in Florida and founded the Tin Can Tourists. 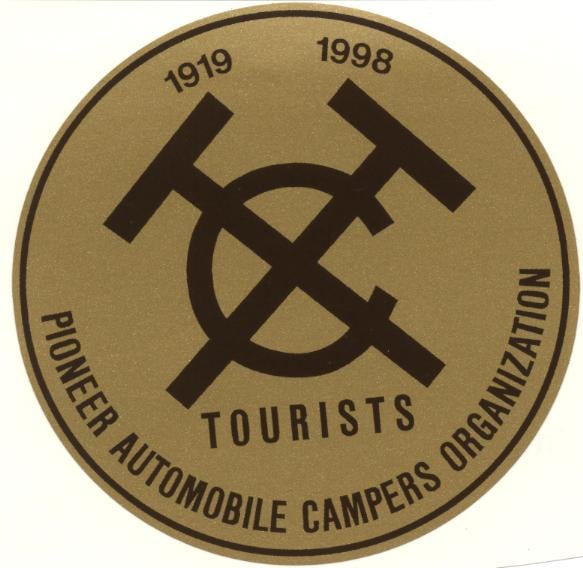 Complete with secret handshakes, official club songs, fun and games, the organization connected travelers throughout the East and Midwest. The name “Tin Can Tourists” has significant meaning to the group. According to the Tin Can Tourists FAQs, “Members were recognized by a tin can soldered to the radiator cap of a member’s car,” says the TCT. When driving down the highway they could instantly recognize one another.

The club’s popularity skyrocketed to tens of thousands of members over the next two decades. They held large rallies in Florida during winter and in summer they gathered in the Midwest. But by the 1960s the Tin Can Tourists began a slow decline until the club became a forgotten chapter in RVing history. Then in 1998 a newly retired couple from Michigan hit the road in an old Airstream and decided to give new life to the old club.

The Tin Can Tourists Vintage RV Club of Today 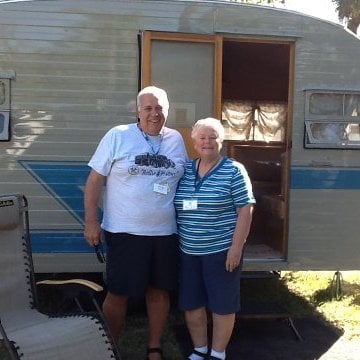 When Forrest and Jeri Bone resurrected the Tin Can Tourists it wasn’t to capitalize on the increasing popularity of vintage trailers. “My dad is a retired English teacher and coach. Vintage trailers were what they could afford to travel around in after retirement,” says Terry Bone, the couple’s son who serves as Mid States Representative and will take over TCT in 2018. “My mom’s dad was always an Airstreamer, so it made sense for them to get into vintage Airstreams initially,” said Bone.

During the club’s early days it looked like most RV clubs: gray haired and retired. That’s no longer the case says Bone. “Now it’s a very diverse population – from retirees, families with kids, to single women.” He says that solo women RVers are flocking to the small canned ham trailers of yesterday because they’re both affordable and manageable. “They want to leave the nest they’ve managed and start to explore and find adventure.” he says. 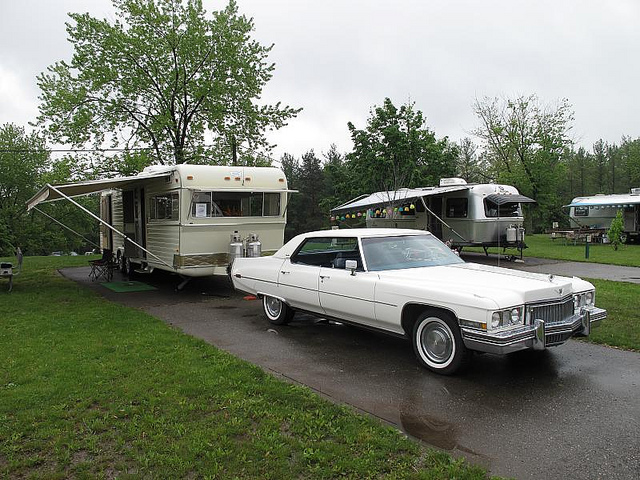 Any of the 50 or so official Tin Can Tourist rallies around the country give notable glimpses of the RV manufacturing industry. More Shastas and Airstreams are usually present because those companies sold so many units. And you’ll often notice more of one make of RV in certain parts of the U.S.

“There are manufacturers that were more regionally based and you’ll find that there popularity is still tied to the region,” says Bone. “Examples are Avions in the Midwest due to the fact that they were manufactured in Michigan and still have a repair some there. West Coast is where you’ll find many unique brands that setup shop in California – Silver Streak is one of those brands,” he explains.

No matter which TCT rally you attend, one thing is clear: the club is all-inclusive and embracing of all vintage RVs over 20 years old. “I think this is the best thing about the Tin Can Tourists,” says Bone. “If you come to an event, you get to see everything from small to large, from 1920’s to brand new, from museum quality to fresh barn finds, from perfectly restored original to entirely customized.”

Ultimately though, Bone says that the real benefit of the group is the camaraderie and lasting friendships that flourish among strangers who gather over mutual love of RVing.

As an information technology manager at Ford Motor Company, Bone’s techie background has been instrumental in TCT’s explosive growth. “The club will finish this year (we run May to May) with over 2500 official members and we have 25,000 members on Facebook,” he says.

Curious about vintage RVs? The Tin Can Tourists are online and ready to teach you evertyhing they know.