You are here: Home / Top Stories / Top of the Tetons in Wyoming
This post may contain affiliate links or mention our own products, please check out our disclosure policy here. 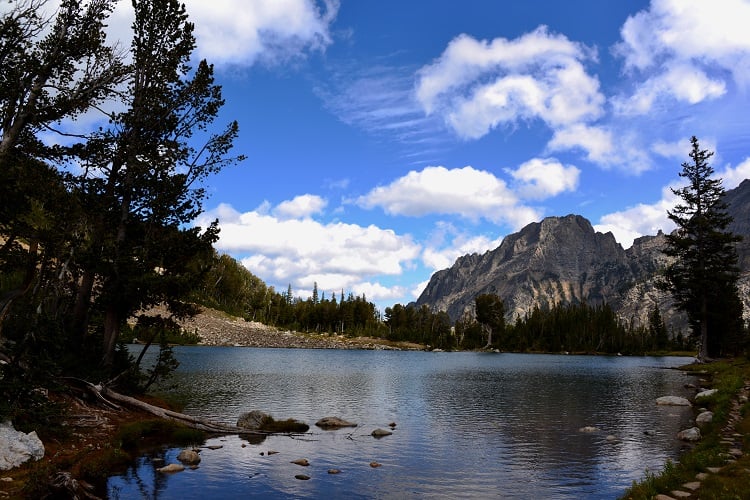 Grand Teton National Park in Wyoming is a gathering place of glacial-melt waters set against a dramatic sky-slicing mountain range. My plan was to spend a few days in the area to hike along the lakeshores and ascend to the ridges several thousand feet above the valley floor.

Northwest of Rawlins, WY, I entered Lander on Highway 287 as darkness approached. I turned west on State Highway 131 where I found Sinks Canyon State Park, as well as the Sinks Canyon Campground of Shoshone Natioal Forest, beside the Popo Agie River. Sinks Canyon is the location where the Popo Agie vanishes underground into a limestone cave, emerging a quarter-mile lower as a spring pool filled with large trout. Both campgrounds offer pleasant primitive conditions with worthwhile hikes along the Popo Agie River.

The next morning, I drove through the Wind River Indian Reservation of the Eastern Shoshone and Northern Arapaho tribes and arrived at the Moran Entrance to Grand Teton National Park early afternoon, surrounded by the shimmering fall colors of aspen groves. As soon as I entered the park, I chose a campsite in the full-service area of Colter Bay on Jackson Reservoir. Within a few hours, Colter Bay motorhome and tent camping areas were filled to capacity. 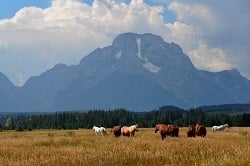 Mount Moran rises over horse ranches in the valley below The Tetons.

That evening, I took a drive south along the Teton Park Road to explore the overlooks along the shore of Jackson Reservoir. I turned down the one-way road at North Jenny Lake Junction to find the String Lake Trailhead near Jenny Lake Lodge where I intended to begin my hike in the morning up Paintbrush Canyon. Then, I continued south to the Lupine Meadows Trailhead, the starting point for hikes to Amphitheater Lake as well as Garnet Canyon and the summit of the Middle Teton at 12,804 feet.

In the morning,  I drove to the String Lake Trailhead at the north end of Jenny Lake near Jenny Lake Lodge and followed the shoreline north. Then I crossed a stream and hiked west, beginning at an elevation of 6,800 feet, onto the Paintbrush Canyon Trail. I wound up switchbacks on an intermediate trail through dense forest broken by open views of the expansive lakes in the wide valley below.

I passed through designated camping areas for backpackers, strictly regulated by backcountry permits. I hiked between steep canyon walls among beautiful rock gardens of wildflowers to reach a junction with the Holly Lake Trail. Holly Lake, six miles from the String Lake Trailhead, is a small alpine lake that lies at an elevation of 9,400 feet. I decided to not continue to Paintbrush Divide. Continuing over Paintbrush Divide into Cascade Canyon is a loop of more than 20 miles, which I had completed on a previous visit after 12 hours of hiking. Instead, I chose a relaxing evening with a scenic drive through Teton National Park.

Early in the morning, I found the Lupine Meadows Trailhead, south of Jenny Lake. From the trailhead at 6,500 feet, the summit of the 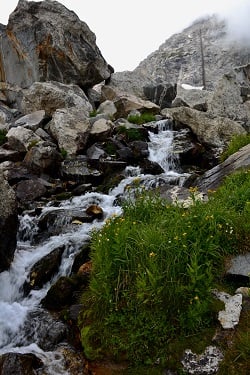 Middle Teton through the south couloir was a gain of 6,300 feet, a full day or a stay overnight in the backcountry. The weather forecast was promising with partly cloudy skies and a high of about 50 degrees.

I made my way on intermediate switchbacks that rise to a junction that splits at three miles and 8,400 feet between a north trail to Amphitheater Lake and a south trail that terminates at the Meadows. A small backcountry camping area can be found at Garnet Canyon. After three hours of hiking, I arrived in a challenging tumble of large boulders beneath the meadows, with a small stream flowing through the puzzle of rocks.

I emerged from the boulder field onto a flat area with spongy turf and wetland wildflowers, broken by small niche tent sites used by backcountry campers who rested here on overnight ventures to the summit of Middle Teton. From this point to the top of Middle Teton is steep, unmarked scrambling up a talus field. After another hour of ascent, I was five miles from the trailhead at 9,700 feet, with several miles of steep, sliding rock ahead of me. I took time to rest on a boulder and eat a snack of nuts, while a snow squall erupted in the canyon. Pulling my down jacket out of my day pack, I decided that a prudent move would be to begin the descent back into the valley.

Once I was out of Garnet Canyon, the snowstorm vanished. Warm afternoon air enveloped me throughout my return to the trailhead. Along the way, I paused to observe a pair of ptarmigan foraging on a slope covered in wildflowers and turf. The pair was well camouflaged in mottled brown feathers, blending into the composite rocks strewn down the mountainside. In the past, I have shared the shelter of an outcropping with a covey of the tolerant birds during a snowstorm near a high summit. 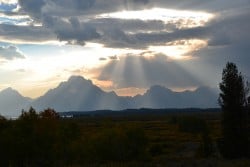 The Tetons lit by shafts of light at sunset.

Arriving at Colter Bay a couple of hours later, I wandered on the system of small trails leading to Hermitage Point. Coming over a low-lying ridge, I saw a black bear browsing among the berry bushes that covered the forest floor. I stood motionless and silent until the bear meandered up the slope and out of sight. After exploring the shoreline of Half Moon Bay, passing moose tracks in the shoreline mud, I returned to Colter Bay.

The next morning, I drove north through Yellowstone National Park, visiting the West Thumb Geyser Basin and Mammoth Hot Springs. During the afternoon, I watched a buffalo herd grazing beside the road in the Lamar Valley. Then, I entered Shoshone National Forest, taking the Chief Joseph Scenic Byway east to the crossing of the Clark’s Fork River below Dead Indian Pass.

This is the place where the Nez Perce, led by Chief Joseph, successfully evaded a trap set by General Samuel D. Sturgis in September, 1877, during a thousand-mile flight in an attempt to reach Canada. Nez Perce scouts observed cavalry forces east of the Absaroka Mountains. Therefore, the group of 700 Indians created a ruse of heading south to the Shoshone River, while instead fleeing north through the narrow, cliff-sided canyon of the Clark’s Force River. The maneuver allowed the Nez Perce to evade the U.S. Cavalry for another month until they were forced to surrender at Bear Paw Battlefield, 40 miles south of the Canadian border.

Here, I found a quiet site for the night in Dead Indian Campground before heading to Cody and south to Bighorn River.

Kim Fenske is a former wilderness ranger and the author of “Hiking Colorado: Holy Cross Wilderness Area” and “Greatest Hikes in Central Colorado: Summit and Eagle Counties.” The books are available as e-books at Amazon.com.