You are here: Home / Blog / Tour the Historic Hughes House on the Oregon Coast
This post may contain affiliate links or mention our own products, please check out our disclosure policy here. 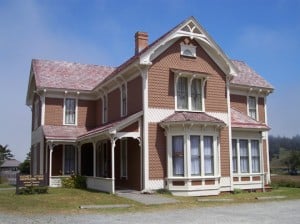 Cape Blanco State Park near the town of Port Orford on the Oregon Coast is a popular destination. Open year round, most visitors come to see the Cape Blanco Light Station and stay at the campground (approximately 50 electrical sites with water for $22 per night). While you don’t want to skip a tour of the 1870s light (it holds five Oregon records, including most westerly and oldest continuously operating lighthouse on the Oregon coast), you also don’t want to miss a docent-led tour of nearby Historic Hughes House. Built in 1898 for Patrick and Jane Hughes, this restored Victorian farmhouse is quite elegant; its 11 rooms are filled with antiques, some original to the family. 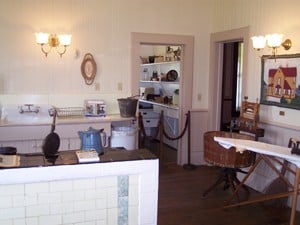 Patrick Hughes, a native of Ireland, settled here in 1860 and developed an extensive dairy farm. Although the business went well, it was nearly four decades before this stylish home was built. Sadly, Mr. Hughes lived here only a few years before he died. Mrs. Hughes lived here until 1923, and the last descendant occupied the house until 1971, when it was acquired by the State of Oregon and incorporated into the Cape Blanco State Park. The Hughes House is unique in many ways. In addition to the size, which is large for the period—two stories, about 3,000 square feet— this house also has indoor plumbing (although it didn’t have electricity until 1942). The kitchen features an expansive cast-iron wood stove, and the fireplace in the parlor burned coal instead of cheaper, more-easily obtained wood. The striking woodworking throughout the home practically gleams, especially the mahogany banister leading upstairs. On the second floor you’ll find bedrooms and a chapel, complete with an original altar (one of Patrick and Jane’s seven children, John, was a Catholic priest). 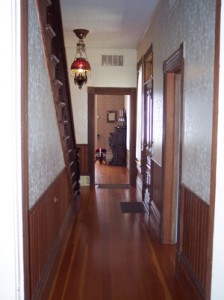 Although any structure on the coast will be battered by Mother Nature, this home has weathered very well thanks to the two-by-eight Port Orford cedar boards from which it is built (and the staff and volunteers who provide the upkeep). Listed on the National Register of Historic Places, and built at a cost of $3,800, only the house remains of the former 1,800-acre dairy ranch. Thanks to very knowledgeable docents, visitors get a great sense of how the Hughes family lived and thrived on this property for well over 100 years. 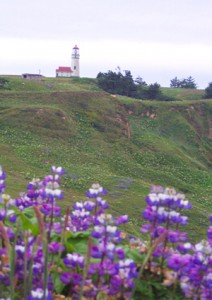 Open daily April – October from 10:00 a.m. to 3:30 p.m., every day except Tuesdays (closed Tuesdays). Admission is free, but donations are appreciated.

Driving directions: From Highway 101, 4.5 miles north of Port Orford and 26 miles south of Bandon, travel west on Cape Blanco Road. After you cross the marshy bottomland, the road begins to climb and soon you will see a sign on your right, then the entrance to the house.