You are here: Home / Top Stories / Tracking the Donner Party
This post may contain affiliate links or mention our own products, please check out our disclosure policy here. 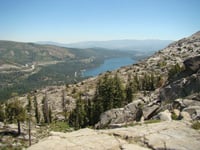 How did they do that?

My wife and I voiced that question in near unison while looking out the windows of our motorhome at the rugged terrain of the High Sierra near Donner Pass. How did pioneer families in the 1840s get their covered wagons, loaded with everything they owned, over those steep, heavily forested, boulder strewn mountains and sheer cliffs? And why would they even try it?

We were traveling through much of the same area they had. Part of the way was even along the same route. But a motor propelled us comfortably and safely along nicely paved roadways. There were no boulders to move, brush to clear, and trees to cut along the way. We didn’t have to unhitch our oxen and take our “wagon” apart to get over frequent obstacles, or go down steep cliffs by rope.

Instead of the many weeks it took them to cross that treacherous and often deadly route over the mountains, choking on dust or struggling through deep snow—all the while keeping an eye out for hostile Indians, bears, mountain lions, rattlesnakes, and other potential threats—it took us just a couple of hours.

We didn’t have to worry about being trapped for weeks or months by winter snow either. Around Donner Pass the weather can be brutal. During the winter of 2010-11, for instance, more than 700 feet of snow fell. Donner Pass is known as one of the snowiest locations in the United States. Wind crossing the ridges frequently exceeds 100 mph. Those pioneers had to be some very hardy folks.

But the same places they traversed while enduring such hardship, especially from Donner Lake, across Donner Pass to Emigrant Gap, aren’t just of historical interest.  They provide a wonderfully scenic environment today for summer and winter recreation.
Beautiful Donner Lake has water sports in the summer. The huge Donner Pass Ski Area (including Donner Ski Ranch, Sugar Bowl, Soda Springs, and Norden) offers winter sports activities.  There is much to see and do. 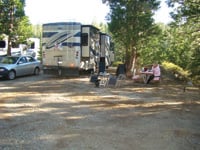 To explore the area, we set up at the Snowflower RV Resort. It is adjacent to Snowflower Lake, near Emigrant Gap, to the west of Donner Pass. Unlike most campgrounds in the area, this one is open year-round and can accommodate virtually any size rig. Using it as a base, we took day trips by car and on foot to reach points of interest.

(By the way, taking an RV up or down Donner Pass Road on the east side of Donner Pass is a bad idea: It is steep and curvy. A better alternative for getting an RV from one side to the other is to use nearby Interstate 80.)

After gathering historical information from the Internet about the first groups of pioneers to use the “Truckee Route” over the Sierras, and then visiting points of interest, we were able to get a much better understanding of why they used that route and what they had to endure.  Just stopping at vista points and historic locations won’t really afford the best perspective because the rugged terrain is much more difficult to traverse than it looks from an RV or car. If time and mobility allow it, try walking some of the many trails through the area—particularly segments of the Mt. Judah Trail; also, the Pacific Crest Trail. You won’t be disappointed.

The 2,663-mile Pacific Crest Trail runs along the spines of the Sierra Nevada and Cascade mountains, from Canada to Mexico and crosses the route taken by those early pioneers near Donner Pass. Walking segments of it, the Mt. Judah Trail and other offshoots provides an incomparable view of the terrain they had to cope with—all the way from where the Donner Party wintered near Truckee, up to and over Donner Pass, then west to beyond Emigrant Gap. 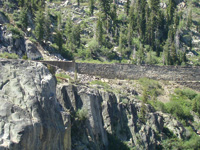 Though many points of interest in the area were named after the Donner Party, it wasn’t actually the first group to use this route for emigration from the United States to California (which was then a territory belonging to Mexico). During the spring of 1844, a group of 50 men, women and children known as the Stephens-Townsend-Murphy Party headed toward California from Council Bluffs, Iowa. At Fort Hall, Idaho, they left the well-marked Oregon Trail and headed west—across the Nevada desert and into the Sierra mountains—in search of a shorter route.

They encountered a Paiute Indian chief who agreed to guide them along a route long-used by Native Americans to cross the mountains. The route took them up the steep eastern slopes, generally following the Truckee River. Eventually they crossed over what would later be named Donner Pass (at 7,056 feet), and continued west into California. That first group of pioneers named the river and lake in honor of the Paiute chief, using his initial greeting to them of “Tro-kay!” (which meant that everything was all right).  To the west of Donner Pass, they found a low gap in the ridgeline and became the first emigrants to pass through it (at an elevation of 5,200 feet).

In May of 1846, what became known as the Donner Party left Missouri and headed west in nine wagons. George Donner was a 62-year-old farmer. He brought his 44-year-old wife and five daughters, ages 3 to 13. Also in the group were Donner’s older brother, his wife, two teenage stepsons, and their other five children. 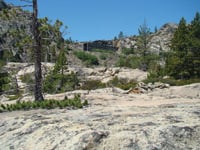 Another family that left with them was headed by James F. Reed, a wealthy Irish immigrant.  Accompanying him were his wife, two sons, two daughters, and his mother-in-law. Reed had a very large wagon custom-built for the trip. It was described as a luxury carriage, and referred to by one of his daughters as the “pioneer palace car.”  With spring seats and a stove, it took eight oxen to pull it. The family hired young men as drivers for the oxen. (Maybe that carriage was the inspiration for some of the earliest RVs. Just saying!)

Within the first week, the Donner Party was joined by other stragglers from a group of about 500 wagons that left before them.  Among those was a widow named Levinah Murphy, and her family of 13—including five adolescent children and two married daughters, along with their families. The Donner Party eventually grew to 87 members, including many women and children.

Bad Weather
The group was slowed by heavy rain and other problems. So they took what had been represented as a new but faster route across Utah and Nevada. In fact, it turned out to be slower and much more difficult. Wagons, horses and cattle were among the first casualties. Heavy labor was required to clear the way ahead. Time was lost and morale suffered. They had planned to be in California by September, but instead found themselves trapped by snow in early November at the east end of Truckee Lake (now Donner Lake).

Most of them took shelter in the remnants of three cabins near the lake that had been erected by the first group of emigrants.  Some others, including the Donner family, camped in tents several miles away (near Alder Creek).  By December they had all begun to run out of food. So 15 men and women tried hiking out to the west on snowshoes. Only seven of those survived, and they had to eat the flesh of the others to do so.

Several times during the next couple of months, people tried to mount rescue attempts from California. But harsh weather and the Mexican-American War delayed them.  Finally, in February of 1847, rescuers reached the last starving survivors. Only 48 of the 87 members survived. Most resorted to cannibalism before being rescued. The surviving children of the Donner brothers were orphaned. 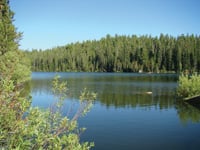 Hundreds eventually followed along this same route, especially during and after the Gold Rush. And when the first transcontinental road was completed in 1913, it went over Donner Pass in a route that stretched from Times Square in New York to Lincoln Park in San Francisco.  That historic Lincoln Highway was later named U.S. Route 40, and is now known as Donner Pass Road.

Interstate 80 has replaced U.S. Route 40 as the primary means of accessing the area. It is a wonderful multi-lane freeway that is kept open year-around. But instead of utilizing Donner Pass, it goes over the higher—but wider—Donner Summit. Now it is possible to visit virtually anytime, even with an RV.

The area has become a mecca for both summer and winter recreation.  Backpacking, hiking, biking, water sports, alpine and cross-country skiing, rock and ice climbing, are among them. The area is beautiful to behold, and it is just too bad the early emigrants—especially members of the Donner Party—couldn’t have enjoyed it as we have. n

Ken Reid, an RVer for more than 40 years, lives in Modesto, California.

Donner Memorial State Park, located just off of I-80 at the east end of Donner Lake, offers year-round access to the Emigrant Trail, Emigrant Trail Museum, Pioneer Monument and Donner Lake. It has 154 campsites, but the maximum lengths are 28 feet for motorhomes and 24 feet for trailers. For information, call the park at (530) 582-7892 or see parks.ca.gov/?page_id=503.

Snowflower RV Resort is at 41776 Yuba Gap Drive in Emigrant Gap. (Phone number:  877-570-2267) The resort is open year-round; but winter weather may impede access. There are 206 sites, with water and electric; some of the sites will accommodate up to 40-foot rigs. There is a 23-acre lake too. For details, see thousandtrails.com.  (Note:  GPS devices may tell you to exit I-80 at the Emigrant Gap exit, BUT DON’T TAKE THAT EXIT.  There isn’t even a turnaround.  Instead, take Yuba Gap—Exit 160)!

For information on other camping options, check out visitplacer.com/northern-california-camping.aspx.

A brief summary can convey only a little of what those early pioneers accomplished and what they endured at Donner Pass on their way to California. There are books on the subject, and there is a 25-page historical account on Wikipedia at en.wikipedia.org/wiki/Donner _Party.