You are here: Home / Top Stories / Trailing the Pioneers
This post may contain affiliate links or mention our own products, please check out our disclosure policy here.

As early immigrants struggled along the Oregon Trail, they had a tough decision to make as they made their way 500 miles across Idaho. Should they risk the danger of crossing the Snake River or endure the dry, rocky route along the river’s south bank?

The point where they had to make that decision is now the site of an Idaho state park that includes an education center where exhibits tell the story of those early travelers.

The original course of the Oregon Trail was from Independence, Missouri, to Oregon City in Oregon’s Willamette Valley. Although fur trappers and explorers had used the travel corridor since 1811, pioneers traveled the trail by wagon train mostly between 1841 and 1848.

The trail entered Idaho in the southeast corner of the state. At Fort Hall, it joined the Snake River, following the south bank until a crossing was reached near what is now known as Glenn’s Ferry. 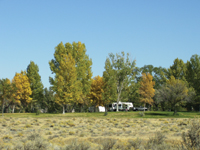 Crossing the Snake was always dangerous, but when the water was low enough to negotiate, everyone who could would taken advantage of the more favorable northern route to Fort Boise. Those who crossed the river found more potable water and better feed for their stock. But during high water, most immigrants were forced to travel along the southern alternate route into Oregon, a difficult dusty trail that took its toll on man and beast.

About half of the immigrants chose to attempt the crossing by using the gravel bars that extended across the river. Not all were successful and many casualties were recorded in pioneer diaries. Many diaries also recounted how the Shoshone and Paiute Indians helped the immigrants cross the river, with the writers claiming they would have never made it without this help. 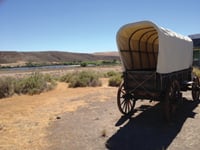 Three Island Crossing State Park is along the Snake River, just four miles off Interstate 84 and 72 miles east of Boise. As weary travelers, we drove into the park in the late afternoon on a scorching hot day. Although we didn’t have a reservation, we lucked out with a lovely, shaded campsite. We breathed a sigh of relief as we settled into our green oasis. Once rested, we enjoyed hiking the trails throughout the park. One of our hikes took us to the site where Gus Glenn’s ferry entered the water. Cables and equipment are still visible, and informative signs helped us to imagine immigrants, covered wagons, stock, and freight crossing the river.

A special attraction at the park is the Oregon Trail History and Education Center, where emphasis is placed on the Euro-Americans and Native Americans working together at the Snake River crossing. Many exhibits demonstrate the hardships of the trail. Of particular interest was a packing list for the Oregon Trail and a covered wagon. The center also features Native American life, together with a tipi and native craftwork. A small theater shows an orientation film about the Three Island Crossing.

The education center is closed in the winter, but the 613-acre park is open year-round. It has 82 paved campsites with electricity and water hookups, picnic tables and fire pits. Eight cabins, situated in the day use area overlooking the Snake River are equipped with electricity, heaters/air conditioners and bunk beds to accommodate five people, covered patios with porch swings, barbecues, fire pits and picnic tables. The restrooms have flush toilets and showers. Wi-Fi is available throughout the park. A dump station is on-site. Extra facilities include a large day-use area, shelters for large groups and group camping, and river access for swimming and fishing.

Carmela Vineyards, located across the street from the park, has wine tasting, a nine-hole golf course, restaurant, spa and cabins.

Mary E. Trimble is a novelist and travel writer who lives in Camano Island, Washington.