You are here: Home / Blog / Trout Fishing in Alaska
This post may contain affiliate links or mention our own products, please check out our disclosure policy here. 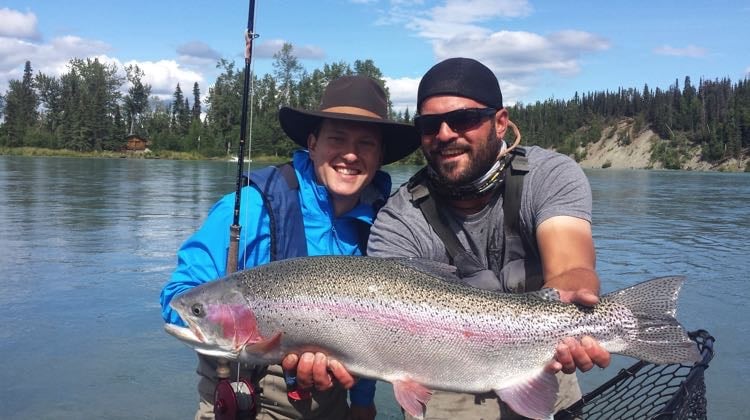 A midsummer trip to Alaska has become a bit of a family tradition. During the last five years my son Steven and I have taken off for the North Country, along with a few members of my fly-fishing club and old college buddies and their sons. One could easily spend an entire summer driving up and down that great state, RVing, camping and fishing new waters almost every day!
?For a new fly fisherman, this is a real joy! There are a lot of species to chase, including many not available in the Lower 48. And they are often available in numbers that can give you a confidence (false or not!) that is especially helpful to a newly converted fly fisherman. For those who have spent hours casting a worm or chunk of anchovy into a body of water hiding a very few fish that have been worked to death by a nonstop flood of anglers, it is a welcome change to toss a bit of fluff or feathers that you have fashioned yourself (or borrowed from your buddies!) into a creek, lake or bay loaded with hungry fish.

Every year we take along a novice or two who have never really done much fishing with artificials, and this year was no exception. But there were a lot of firsts on this trip. It was the first time my son Andrew had been able to join us. While he had fished with us over the years, as a young adult starting out in business, he just wasn’t able to take off a week into the busy season, even to take advantage of a trip where Dad was paying! But this year he managed to get ahead a bit, and had come over to Astoria and done a little “lawn casting” to get a feel for the sport. I was excited to see how he would take to the adventure that is Alaska and to tossing a fly over some great waters.

Another first was my effort to lead the fishing group. In the past we’d always had at least a couple of experienced fly fishermen, guys with decades of casting and tying behind them—folks who knew a Parachute Adams from a Pale Evening Dun, who could tie a dozen different knots, and who could fix a broken reel. Sometimes a line of newbies would form in front of them to get help in fixing and tying mangled gear. Now I was the guru; we might well be in big trouble!??In addition to Andrew, we had another novice fly fisher in our ranks. My son Steven’s friend Ford would be meeting us up in Coopers Landing. We had rented a little house near Quartz Creek, a tributary of the Kenai, and would be fishing in various rivers, streams, lakes and bays.

As usual, our first trip would be with our favorite guide, Matty Lewallen. Matty was head guide for Drifter’s Lodge and an amazing fisherman. Cutting his teeth on the streams of Wyoming and Montana, he dearly loves the sport. Each Christmas he sends us pictures from the tropics or the jungles of South America, holding golden dorado bonefish, or tarpon. He is great with a fly rod, but even better with people!

We always start out our trips in this region with a float down the Kenai. This is Matty’s home river, and he was excited to show us what his new drift boat could do. He was always magical with a pair of oars, but his new boat was custom designed to float and drift well, but also to handle a good-sized outboard motor. We could back-bounce lures and troll under motor or oars, but most importantly would be able to zip back upstream if we found some hot waters.

As usual, we did a bit of everything. We started out trolling for sockeye, and even though that fishery was a little slow, we still managed to land a half-dozen in the eight- to 10-pound range. We also caught a 20-pound king salmon, unusual for the date and area, but I had to throw it back! We even took a little time to ferry a poor guy who had managed to bury a 4/0 hook into his lip (a good argument for barbless hooks!). Matty’s buddies asked him to help out by using his faster boat to get the fellow quickly back to shore and to the aid center in Soldotna.

But then we started playing with Matty’s favorite fishery. I love the sockeye, both for fighting and eating, but my guide dearly loves to drift flies for big rainbow trout. The Kenai with its huge salmon runs offers rainbow trout all kinds of good food, and they, unlike steelhead, rarely near the salt chuck. They can feast on salmon eggs and rotting carcasses much of the year and can nail little fish headed for the ocean the rest of the time. Sport fishermen rarely keep rainbows on the Kenai, and fish over 18 inches are protected in most of the big rivers. As a result, they can get big, run most of the year, and are a great opportunity for guides and fishermen.

We had fished for them every year with Matty, but never caught anything really big. My buddy Tom had lost a “fish of a lifetime”—something near thirty inches—, but we hadn’t landed anything bigger than 24 inches, nice fish, but no monsters. That was soon to change!

Switching our gear to 7-weight fly rods, we cast out little flesh flies attached to 12-foot leaders under a small float. These little balls of pale yellow feathers (not your most attractive flies) represent easy food for the trout and char that frequent the Kenai in huge numbers. All along the river are cleaning stations where anglers, during different times in the summer, clean thousands of chinook, sockeye, pink and silver salmon. Most eggs are tossed back into the water along with leftover scraps of fish, providing a huge feeding opportunity for voracious trout. On this trip we’d see how good it could get!
?We had just floated a few yards when Steve hooked the first fish, a nice 20-incher. These are big, beautiful fish, thick and strong from swimming the powerful river. Then Ford took over. With only a couple of fly-fishing trips under his belt (his top rainbow before this trip had been under a foot), he was to have a day worthy of a superstar!

Down went his indicator, he set the hook and up jumped a monster! We all gave him heck and lots of worthless direction as he battled the brightly striped and wonderfully spotted rainbow. It took awhile but finally Matty managed to get the fish netted. Right at 30 inches, it was a monster of a fish, thick fat and powerful. We took a picture, gave high fives all around, and Ford was beaming! Little did we know that he was just warming up!
Drifters Lodge gives out trophy shirts for fish 30 inches or better and Ford was going to work on his wardrobe! We all were battling fish; Matty said it was his most productive big fish day, and soon we all managed at least a fish or two over two feet. We figured it couldn’t get any better as we caught rainbow and char, one right after another, but Ford was sandbagging us!

As we drifted over near a brushy bank, he powered into his rod. A huge shape exploded the river, flying a good three feet in the air. In a heartbeat, Matty was on his feet shouting orders!
?Frankly I didn’t have the experience to know what we should expect from the river, but with 12 years of guiding, Matty sure did. Usually pretty cool, he was yelling a lot of rather colorful, maritime worthy words that he usually avoids, something was getting him very fired up!??“That fish is huge, watch out for the motor!” he screamed. Good advice. The fish made at least a half-dozen swings around the stern of the drift boat and jumped high in the air several times as well. The fish was giant, long but substantial in girth as well—way thicker than the biggest steelhead I’d seen in my years of fishing. It was a great battle and son Andrew caught it all on his cellphone!

After it finally came in, Matty rowed us into shallow water where he and Ford posed for pictures. I was guessing that the fish was destined to be used in a brochure or two in the future. It was longer than 34 inches and a bit over 19 inches around, a trophy by anyone’s standards. We took a bunch of pictures and quickly released the big fish back to his home waters, a little shaken, but no worse for wear.

The guides on that stretch of water use the name, “Old Walter,” to call the mythical dominant rainbow of the river. As we went by one of his fellow guides with a boat full of fishermen, Matty offered up that we just landed a heck of a fish. “Did you catch Old Walter?” the guide laughed. “I’ll send you a picture shortly,” shot back our veteran guide. When Matty talks big fish, everyone listens. It was a heck of a day for Ford and for all of us! “Someday over the Rainbows!” Sorry, couldn’t resist!