You are here: Home / Top Stories / Under Scotty’s Castle
This post may contain affiliate links or mention our own products, please check out our disclosure policy here.

Can you imagine what it would have been like to operate a desert mansion off the grid in the 1920s and ‘30s?  It wasn’t easy and you can find out just how difficult by touring a mansion in California’s Death Valley.

Most know the story of Death Valley Scotty and his castle. Prospector, performer, and con man Walter Scott (Death Valley Scotty to most) convinced Chicago millionaire Albert Johnson to invest in his non-existent gold mine in the Death Valley area. Johnson and his wife made several trips to the region to investigate the mine. While Scotty never led them to the mine, Johnson discovered that his health improved during their visits. By the time the Johnsons realized the mine and Scotty were a fraud, they had fallen in love with Death Valley, forgiven Scotty and befriended him. Mrs. Johnson came up with the idea to build a comfortable winter home for their stays, and they acquired a large parcel of land in Grapevine Canyon. 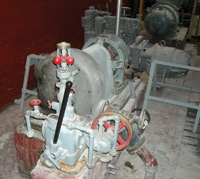 In 1922, construction began on the Johnsons’ Death Valley ranch. As people saw the scale of the $1.5 million project, speculation was rampant that Scotty had a rich gold mine after all. Scotty claimed that he built the castle for himself, and it became known as Scotty’s Castle. Scotty appeared there regularly as a guest of the Johnsons, entertaining visitors with his stories. Scotty was allowed to stay in the ranch while the Johnsons were in Chicago, perpetuating the myth that it was his home.

The castle was built 90 years ago in the middle of nowhere, far from any public utilities. To show how the Johnsons made their home comfortable in the harsh environment of Death Valley, the National Park Service now offers an underground tour in addition to the standard tour of the castle’s living quarters. A National Park Service interpreter leads the tours, and concrete tunnels serve as walking corridors as you view the basement, heating system, original plumbing system and the original electrical generating plant, along with the battery banks to store the power. The highlight of the tour for many is the demonstration of the electrical generator using one of the original Pelton water wheels.

On the tour, you also learn how the National Park Service uses modern technology to preserve the castle.

The tour may be especially appealing to RVers who boondock and understand the difficulties of maintaining a self-contained home off the grid in the middle of the desert. Let’s look at some of the castle’s operational systems of particular interest to dry camping RVers: 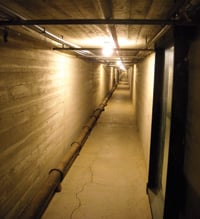 Fuel/Heat: The castle contains over a dozen fireplaces along with a boiler that supplied steam to radiators located throughout the castle. Wood was needed to fire the boiler, but the nearest trees were pinyon pines that produced little heat and were high in the distant mountains. To solve this problem, Albert Johnson bid on the ties of the abandoned Tonopah and Tidewater Railroad. His winning bid of $1,500 bought him the right to salvage 120,000 wood railroad ties. Transporting and stacking the ties cost him a whopping $25,000! Many of the ties still remain stacked behind the castle today.

Electricity: You would think that Death Valley would be the last place you would find a hydroelectric plant, but the springs of Grapevine Canyon 300 feet higher than the castle provided enough flow and pressure to turn a Pelton wheel, which ran a generator that supplied power to the castle and charged scores of Edison nickel alkaline batteries. Yes, the castle operated primarily on DC (direct current), a system with batteries just like your RV!

Hot water: Taking advantage of the endless sun of Death Valley, the castle featured a solar water heater that was quite advanced for the 1920s. You can view the remains of the system behind the castle.

Refrigeration: With a reliable source of electricity from the generator, just a regular compressor type kitchen refrigerator was used. With all the other creative use of resources, you would have expected a solar-powered absorption refrigerator or something equally unique.

In addition to the look at technology that powered the castle, the tour includes a stop to see the thousands of stacked tiles that were intended to line the 270-foot swimming pool. The hand-painted tiles were imported from Spain especially for the Johnsons.
On your next trip through Death Valley, be sure and see what is hidden under Scotty’s Castle. Those that appreciate technology and ingenuity will love it!

IF YOU GO:
Underground tours are offered three or four times daily from November through April and occasionally in May, September and October. No tours are offered in June, July or August. The underground tour takes about an hour. If you have not visited Scotty’s Castle before, the park service recommends going on the main house tour first.

Tours are limited to 15 people. Tickets may be purchased in advance at recreation.gov or by calling (877) 444-6777.  Advance tickets must be purchased at least one day before the tour. On the day of the tour, tickets are sold only at the Scotty’s Castle Visitors Center. For more information, call (760) 786-2392 or visit nps.gov/deva/historyculture/underground-tour.htm.

Camping: The nearest developed campground  is Mesquite Spring. It is open year-round with spaces costing $12 a night. For more details on Mesquite Spring Campground and other Death Valley campgrounds, visit: nps.gov/deva/planyourvisit/camping.htm