You are here: Home / Blog / In the Footsteps of Lewis and Clark Part I
This post may contain affiliate links or mention our own products, please check out our disclosure policy here. 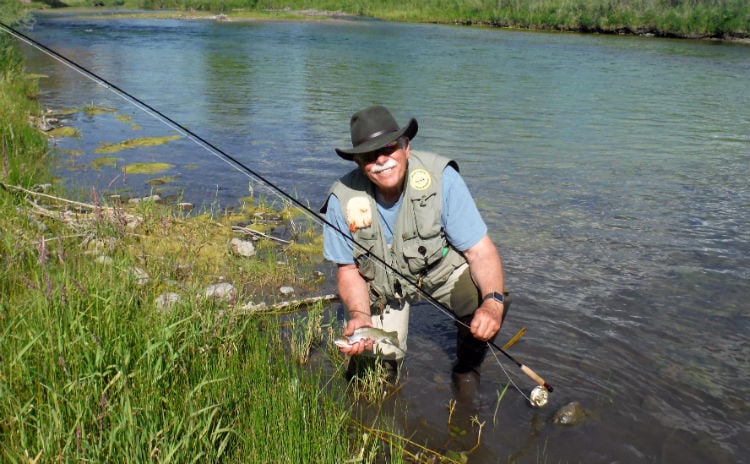 I wanted to get a feel for Lewis and Clark’s travels by crossing over the same country, and also do a bit of fishing in the process. 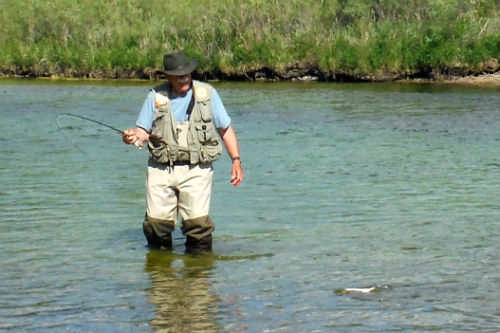 I stopped along the Lochsa River at several places to enjoy the jumping trout.

This summer, my wife Claudia and I decided to take our motorhome and retrace part of the Lewis and Clark trail.  Living in Astoria, OR, within a couple of miles of Ft. Clatsop where the explorers spent several months in 1804 and 1805, we knew quite a bit about their journey. During their winter in our region, the explorers charted the Coast, wrote about the lives of the Clatsop and Chinook Indians, and sketched the plants and wildlife unique to our area.

You can read about their adventure, but like thousands of RVers, I wanted to get a feel for their travels by crossing over the same country and to do a bit of fishing in the process.

In fact, from St. Louis on the Missouri to the Columbia at Astoria, fish were a big part of their diet. In fact, I think they were much more fond of the “white pudding” made by their French guide with the innards and choice parts of the buffalo and enjoyed all the elk they could hunt down. However, fish was a welcome meal.

Our trip would take us 100 miles up the Columbia where we left the River, pass through Walla Walla, and travel up the treacherous Lolo Pass. We visited a number of places in Montana including Missoula, Butte, and Billings. We traveled as far as Ft. Mandan in North Dakota. That fort was where Lewis and Clark wintered before pushing over the Great Plains and Rockies toward the Pacific Coast.

I had always wanted to se the Lolo Pass. In their journals, the explorers gave harrowing accounts of the journey through the Bitterroot mountains, which started at Travelers Rest in Montana and ended in a meadow in western Idaho.   Their timing wasn’t the best and they reached the pass as winter was closing in. 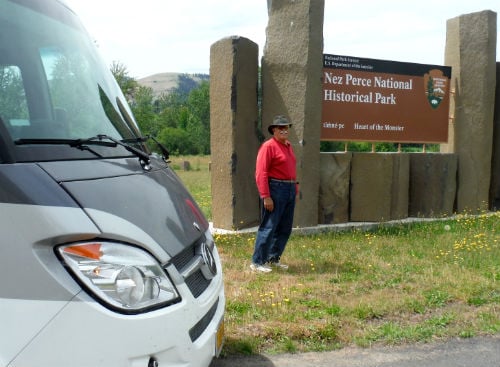 The author during his journey.

The Perils of the Lewis and Clark Journey

This was one of the toughest parts of their travels for the explorers. Following an Indian trail along the steep peaks of the pass, there was little food, water was scarce and the terrain wore right though their moccasins. When the expedition finally made it over the Bitterroot Mountains at Lolo pass, they were famished, exhausted and cold to the bone. They met a group of women from the Nez Perce who were gathering Camus roots on a high plain who gave them some of the freshly dug roots and portions of their winter store of dried salmon.

The poor explorers were in rough shape. Their wreaked digestive systems did not handle the snacks of freshly dug Camus root and powdered salmon well. Historic accounts from the Indians reported that the white men spent several days laying on the ground, moaning with upset stomachs.  Some of the natives traveled a whole day just to see the strangely afflicted white men.

While the pass that the explorers took over the Bitterroot Mountains was high on the peaks, today highway 12 follows the deep canyon carved by the beautiful Lochsa river, running just a couple of miles below the explorers trail. They could see the water and knew it was full of fish but couldn’t make it down the incredibly steep mountains that are a feature of the pass for nearly seventy miles. 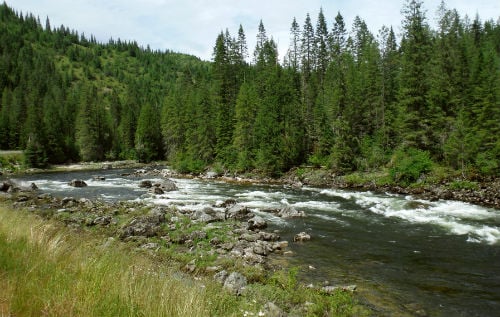 The Lochsa River has two Indian names. One is “It Is Wild” the second is “It Has Salmon.”

Our motorhome didn’t have much trouble and I stopped along the Lochsa River at several places to enjoy the jumping trout. If fishing is on your list, remember to get your license down in Idaho before you hit the pass – there aren’t any places to get one from Long Camp to Montana.

The cutthroat trout will take most any dry fly from an Adams to a caddis and the water is beautiful. Sadly, Lewis and Clark couldn’t get down to it (they probably didn’t have the right flies anyway). The River has two Indian names, one is “it is wild” the second is, “it has salmon.” Lewis and Clark knew both but the first prohibited them taking advantage of the second. By the time the Corps of discovery met the Indians at the end of the Bitterroots they were starving, had eaten one of their skinny horses and were in real trouble.

Many years later, one of American’s first foresters, Elers Koch, sent a letter to the government, suggesting that the Bitterroots that Lewis and Clark struggled overwere too steep and rough to manage as a working forest and that we shouldn’t even try and fight fires in the region. During our 70 miles along the River, we looked up at towering mountains all the way and instantly realized why this was perhaps the toughest part of their journey.