You are here: Home / Columns / Tech Tips / Using Common Sense on the Road
This post may contain affiliate links or mention our own products, please check out our disclosure policy here. 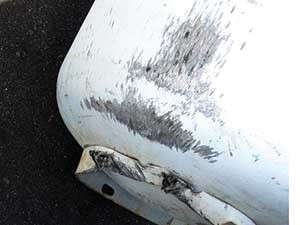 After decades of RVing, we’re convinced there are a few things every RVer needs to bring along. That is, unless you have buckets of money—and since most of us don’t, we’ll carry on.

Our current road trip is just a little example of where we’re coming from. A few days out on the road, we were happily chugging up California Highway 99, spending most of our time in the slow lane, letting the four-wheelers and the faster big rigs zip by. At one point, while one of those big 18-wheelers was creeping past our driver side, we heard an odd dinging noise. At first, we chalked it up to the big rig’s running gear. Trouble was, once the rig was past us, the funny dinging noise kept pace.

Here’s the first thing not to leave home without. Common sense. It would have been easy to kept right on trucking, and try and mentally sort out what the dinging noise was with time, but that little “caution light” in the brain won out, and we pulled out at the next exit. Turns out the “dinger’ was our passenger-side propane cylinder. Normally this fellow sits atop our trailer frame, just behind the tongue jack, held in place with a clamp system. Trouble was, a weld that held the clamp system fractured, and the fully filled five-gallon LP cylinder jumped off the platform and was bouncing off the pavement at 55 miles per hour, holding on for dear life only by the rubber propane “pigtail” hose.

After it skidded down the highway, it’s an understatement to say that the LP cylinder took some serious damage. The metal wall that normally isolates that highly volatile substance from the outside wall was seriously thinned, and had we kept going, the likely end of this would have been LP gas escaping from the container, meeting up with a spark from metal banging against pavement, and a large fireball that surely would have ruined our whole day.

Yep, glad we brought along our common sense. And we were also glad we brought along a set of tools, because we were able to locate a hardware store, buy a few parts, and use the hand tools to rebuild the LP tank support. We got back on the road with no more than a couple of hours of interruption and $6 or so for the necessary parts. Well, yeah, we had to replace that LP cylinder, too. 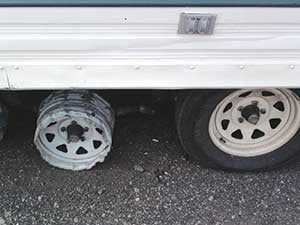 The tire disappeared off the rim. Photo Credit: Russ and Tina De Maris

With that unnerving experience behind us, we continued north through the Golden State, and a few days later, the navigator nudged the pilot, suggesting she’d heard another unusual noise. Nope, this one wasn’t a dinging, but something a bit “off.” We bailed out, and found we were missing a tire. No, it wasn’t a case of “drive until the wheels fall off,” but more like, “drive until the rubber comes off the wheel.” We’ve had flat tires before and usually detected them pretty quickly, but this one—well, not only did we need a new tire, but we also needed a new rim, as the edge of the rim that holds the tire in place was now flatter than a pancake.

In this case, as in several others that we’ve suffered over the years, we were surely glad we had a roadside assistance program. A call to the dispatcher brought us help in the form of a fellow who took on the dirty work of changing out the, well, we can’t say “tire,” as there wasn’t one anymore, but at least he got the spare tire mounted for us and put that funny looking piece of steel memorabilia back on the spare tire rack. Yes, we could have changed the tire ourselves, but it would have definitely taken plenty of time, and as age creeps up on us, we were also spared a few days of sore muscles. For folks with big motorhomes, do-it-yourself tire-changing can be nigh unto impossible, what with the tremendous weight of a mounted tire, that is, if your manufacturer even provides you with a spare.

And pilot speaking here: I know there are plenty of RVers who solo. But at the end of the day, I can surely say I’m glad to have my “navigator” along for the ride. She nudges me when she hears strange noises. Reminds me to put my hair (and my eyebrows) in place before I step out the door and scare somebody. Gets out of the rig and puts up with my grumbling as she directs me on backing the trailer from the blind side. And having just celebrated 38 years of marriage while on the road, I just can’t imagine leaving home without her, either. Thanks for coming along, Honey.

Check out Russ and Tiña’s Internet blog on a variety of RV topics at ICanRV.com.