You are here: Home / Departments / Product Spotlight / Using CradlePoint Router in RV From Home Office
This post may contain affiliate links or mention our own products, please check out our disclosure policy here.

Well, we’re getting the rig ready to get back out on the road. Next Tuesday we’re off to Perry, GA. We are going to attend the Georgia Winnebago/Itasca Travelers (WIT) State Rally at the Georgia National Fairgrounds & Agricenter.

Just recently I obtained a CradlePoint MBR1000 Mobile Broadband Router which I did not get around to setting up until very recently. I just simply plugged in my Verizon USB-727 Air-card into the router and I was up and running on the web, sharing connections, enabling my DW’s iPod Touch and now I can setup her HP laptop. Great! Now I have a real wireless network in my rig. 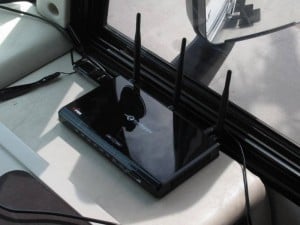 The router setup went well and it was easier than I expected but it was located in an altogether too impractical of a location. Aside from that, this was one of Roxy’s favorite stand and bark locations so I knew that in time the old CradlePoint would have begun showing paw prints.

Just recently we went camping with Depchief at Ocean Lakes and I gave him the “WPA2 Key” in order to connect. Once in his rig and having applied the key, he was able to browse “quite well” he reported from about 50 feet away. He told me he got 3 out of 5 bars.

Last night in a dream, we were camping somewhere and I saw myself installing the CradlePoint up in the overhead compartment and today, I followed through and did just that!

There’s power up there already since this is where the digital converter box is located so that wasn’t going to be a problem. This is the highest point in my rig and it’s also where the LT-40 DeLorme GPS antenna installed. See the cable on the side wall … the antenna was pushed up through an opening and it’s sitting on the top of the compartment ceiling under my fiberglass front cap. The LT-40 works great right where it is and it’s out of sight and out of mind. I also expect that the CradlePoint will be able to push out a good signal from this location. 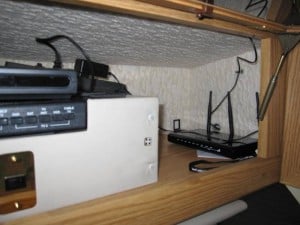 For years, all of the 5 or 6 remote controls and some software cases that we have were stored in this location however those had to be re-located. I got a plug strip out of a storage bins and connected it into a 110 volt plug in the left side wall of the compartment. I then plugged in the Magnavox box and the CradlePoint. Both devices are now on a switch and I can turn them off at the plug strip.

Looking at the task bar, I’m showing 3 bars out of 5 and running at about 65 MBPS. I am using the 802.11N protocol and it’s working well. As I write this Blog, I am sitting here in my office and using the gear out in the motorhome. Life is great!

My DSL connection on my Linksys router is quicker but if the CradlePoint and 727 continue to work as well as it has been today, perhaps I might be able to give back my DSL modem and save $40 bucks a month.

I’m going to evaluate this setup for a few more days until we leave and so far so good. I even uploaded and downloaded a 6MB eMail attachment which didn’t take too long at all. Now when we get to the Fall Rally (10th Anniversary Reunion) in Myrtle Beach, I expect to have some friends however I don’t expect to run 10 or more concurrent connections …. I do have a monthly MB limit! 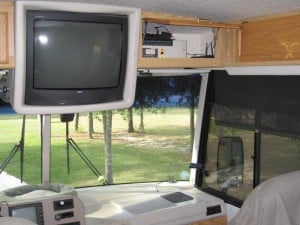 I have to admit that this is one of the few dreams that I had that I was able to remember after I woke up where I was able to work it out into something practical.

The biggest benefit that I see is that I do not have to take apart my Internet connection and move the equipment for use in my home office. All I have to do is plug in the motorhome and turn on the CradlePoint. When we need to get back on the road, the gear is already there and it’s ready to go.

There is a downside to every situation and here’s mine. In July of 2008, we were struck by lightning while attending the GNR. In the very same compartment where the CradlePoint is now installed, I lost the A/V switch (shown) and I also fried a remote control for the TV.

If lightning can strike twice in the same place …. then we’re going to be looking at getting the next generation of CradlePoint Router.

There’s one other inconvenience in using the 727 in the CradlePoint; I can no longer see the 4GB Micro SD Memory Card in the 727’s memory slot! I can give that up …. but it would be nice to still be able to use it.