You are here: Home / Top Stories / Check out the VisionVenture #VanLife Concept RV
This post may contain affiliate links or mention our own products, please check out our disclosure policy here.

The RV industry is responding faster than ever to the latest camping trends. Take the latest concept vehicle, the VisionVenture #VanLife concept RV. 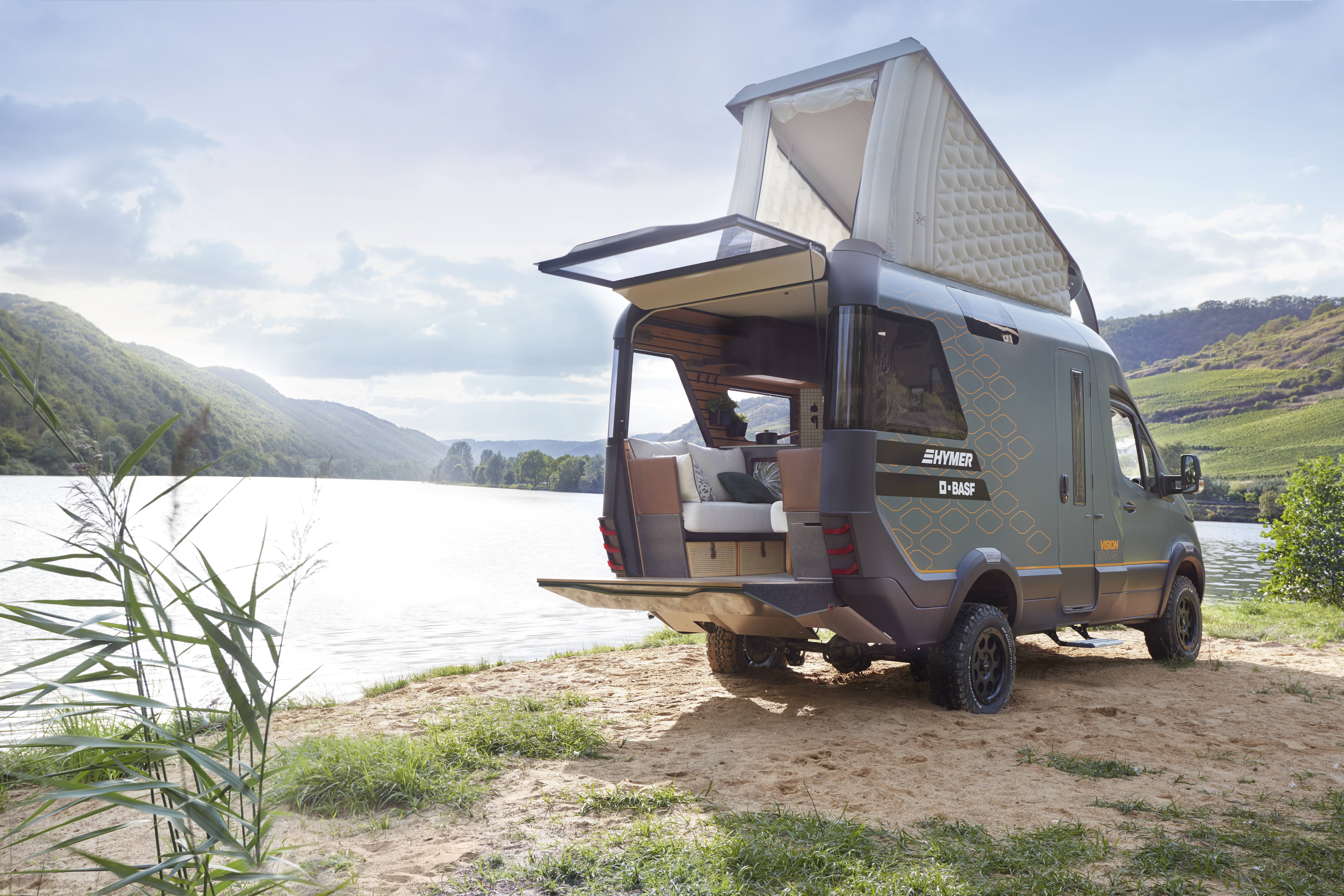 The concept RV you’ll want for your own camper van.

What Makes the VisionVenture #VanLife Concept RV So Different 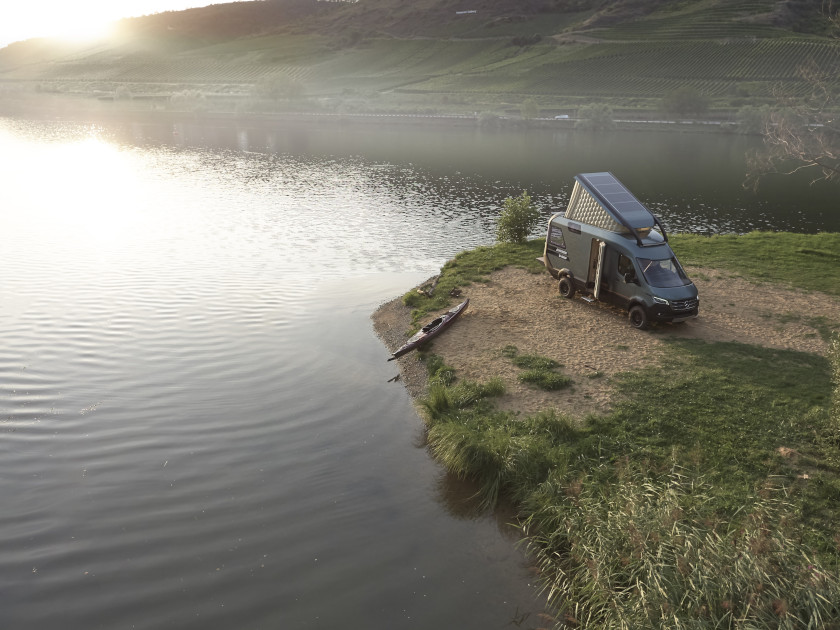 The VisionVenture has four-wheel drive for go-anywhere van camping.

Like many four-wheel drive camper vans, the VisionVenture sits atop a Mercedes-Benz Sprinter chassis. But that’s where the similarities end.

Partly inspired by #VanLife DIY enthusiasts like Matt Cullens of Alaska Vans, the Erwin Hymer designers took the best of home hacks and incorporated them into high-tech must-haves like: 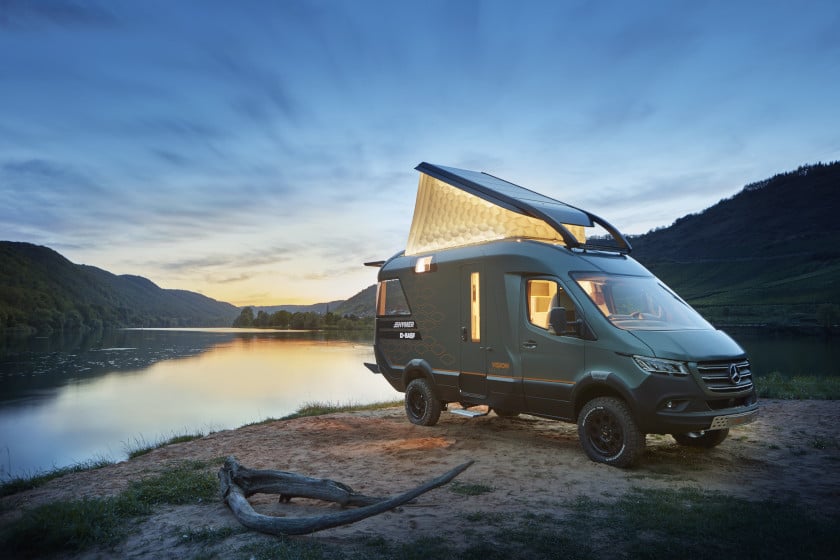 The BASF high-tech body paint keeps it cool inside and out.

Notice how the huge windscreen is shifted further forward for better aerodynamics. And the exterior green paint isn’t just pretty; it was created by the BASF company to regulate the surface temperature. The paint will cool the van’s surface temperature by 68°F (20°C), and cool the interior by up to 39°F (4°C). 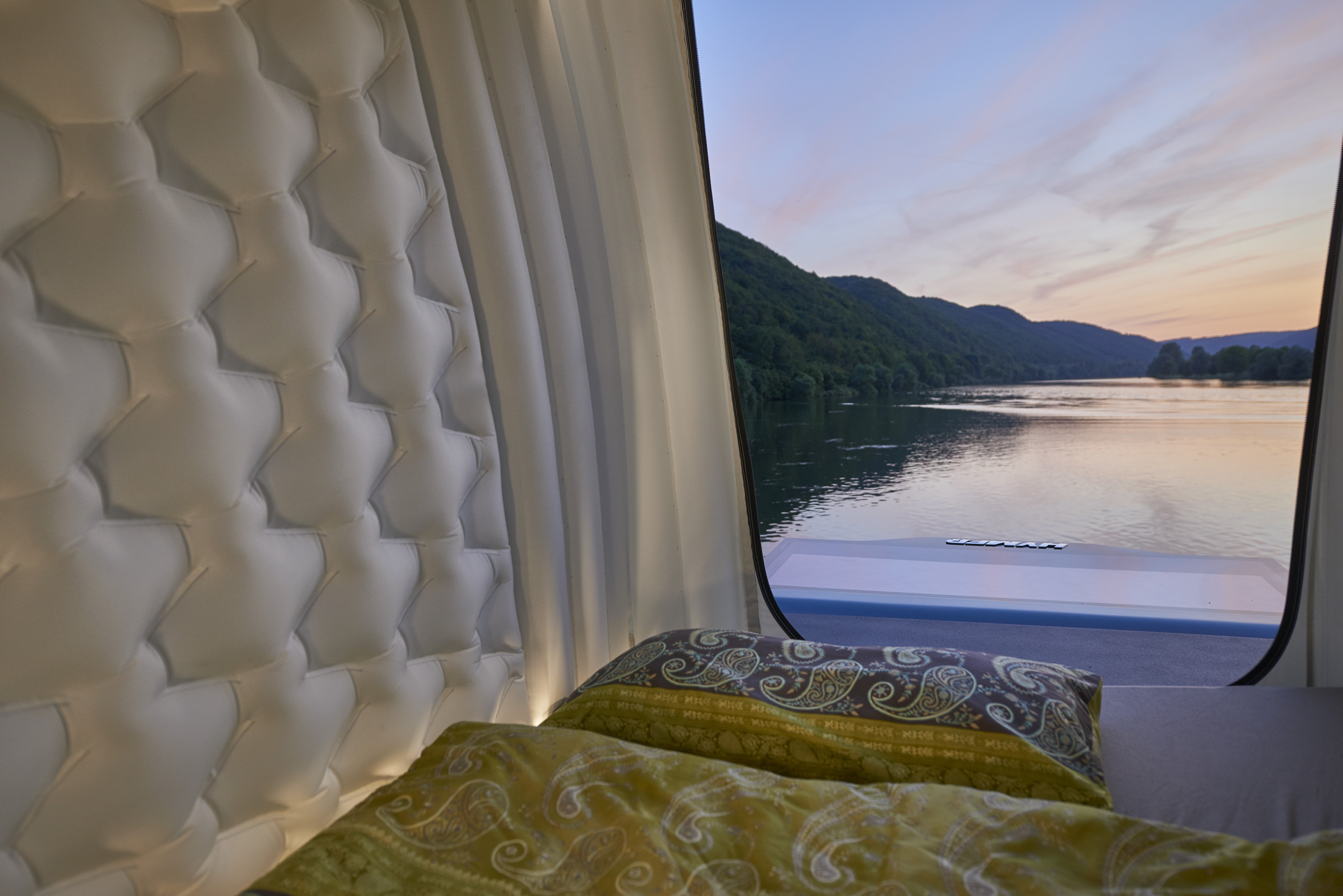 Outer walls are insulating and can be inflated with hot or cold air.

Perhaps one of the best features is the roof. The top is covered in solar panels and the rooftop sleeping quarter walls are inflatable, allowing campers to fill the honeycomb-design pockets with air to heat or cool the space in less than a minute. The roof-top open-air patio gives it a roomier feel.

All the high-tech exterior features are only the beginning. The interior living area feels more like a split-level home than the typical camper van. 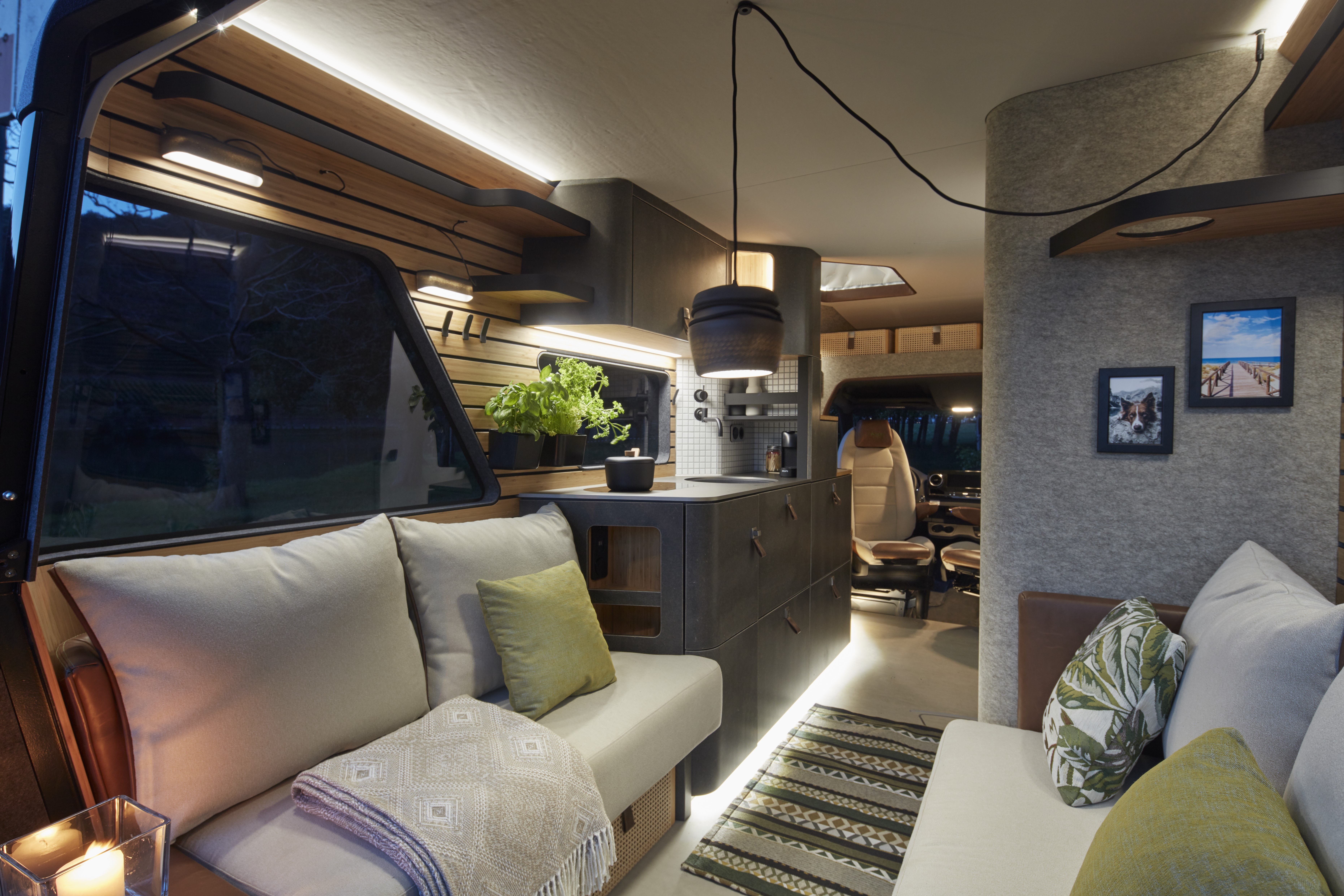 The VisionVenture interior was inspired by popular #VanLife DIY hacks.

The back door windows let in more light and scenery then the typical camper van. There’s also a tailgate which doubles as a back-door patio. Designers even included a pull-out electric barbecue for true tailgating.

Back inside the rig, the natural materials like slate, leather, felt, concrete and bamboo gives it a light, airy feeling. For better organization, the interior walls have railings for practical storage space like hanging camping gear and personal belongings. The built-in LED ceiling lights are easy on the eyes, especially in the office nook with a retractable bulletin board. 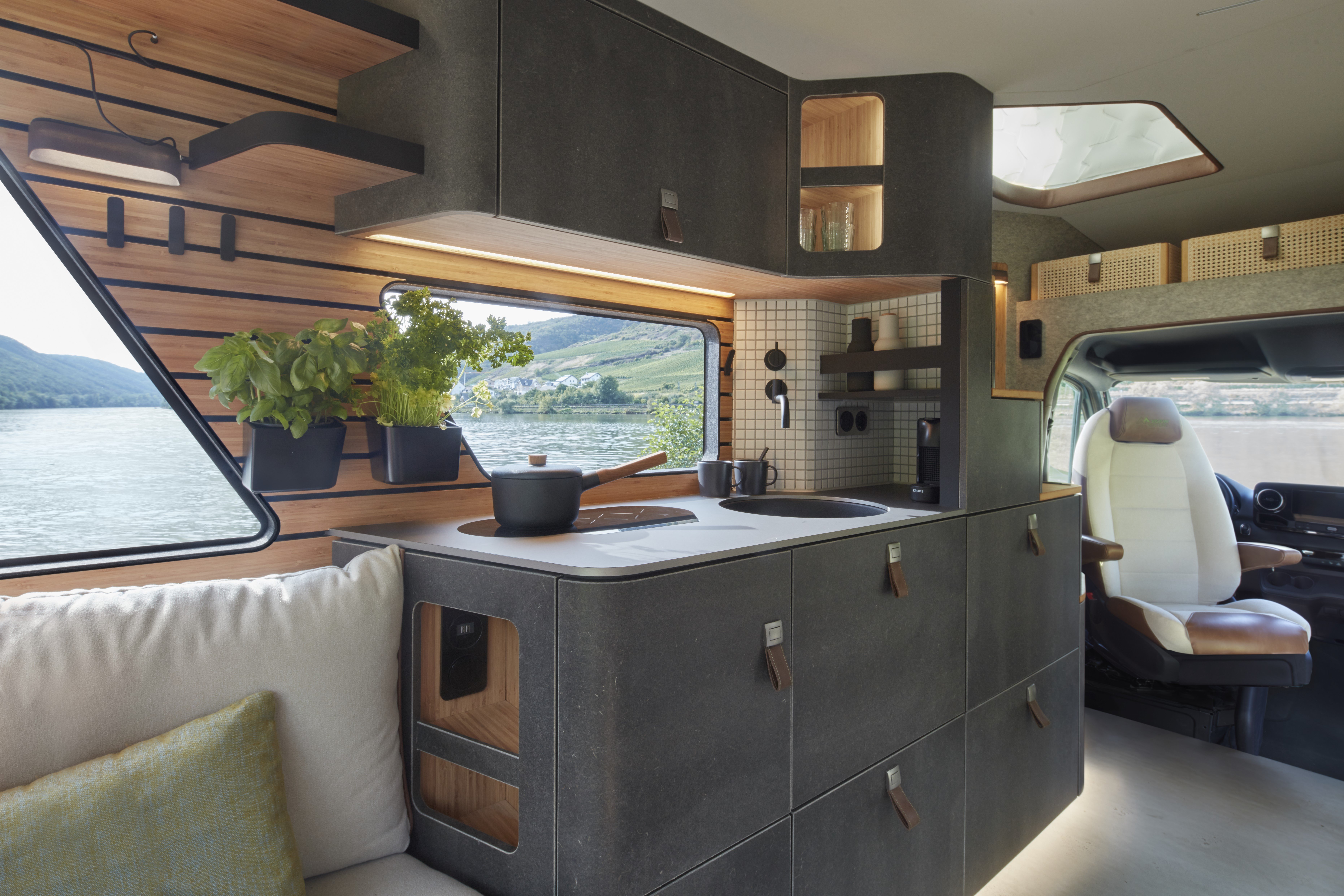 Since the kitchen is one of the most important elements of any RV, designers made it as feature-rich as possible. For more space, they integrated kitchen cupboards into the LED-lit staircase that goes up to the second floor sleeping quarters. There’s even a pull-out top-loading refrigerator. 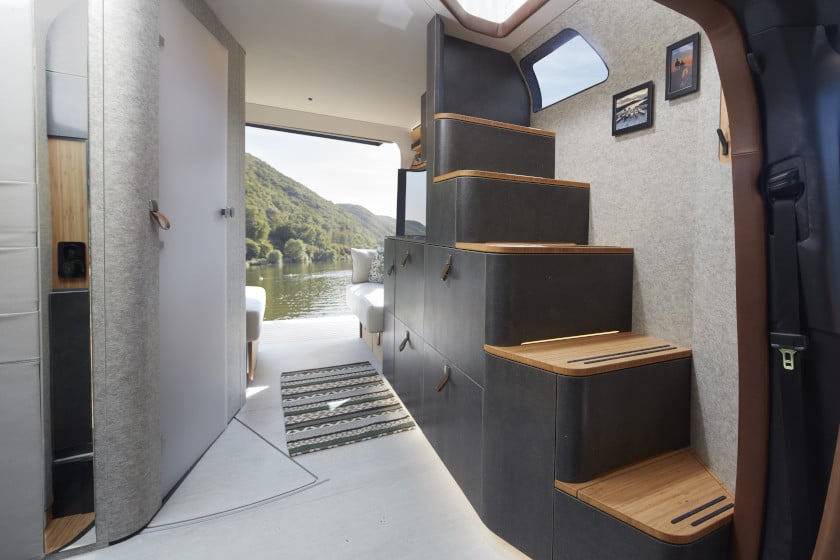 The typical camper van doesn’t have lot to offer when it comes to the bathroom, but the VisionVenture is different. It gives maximum flexibility and compactness thanks to high-tech materials like BASF’s Veneo Slate® natural stone material. Part plastic, part stone, the material is just one millimeter thick, allowing it to be light and bendable. It enables the bathroom’s side walls to unfold, so users can push the sink aside and shower. 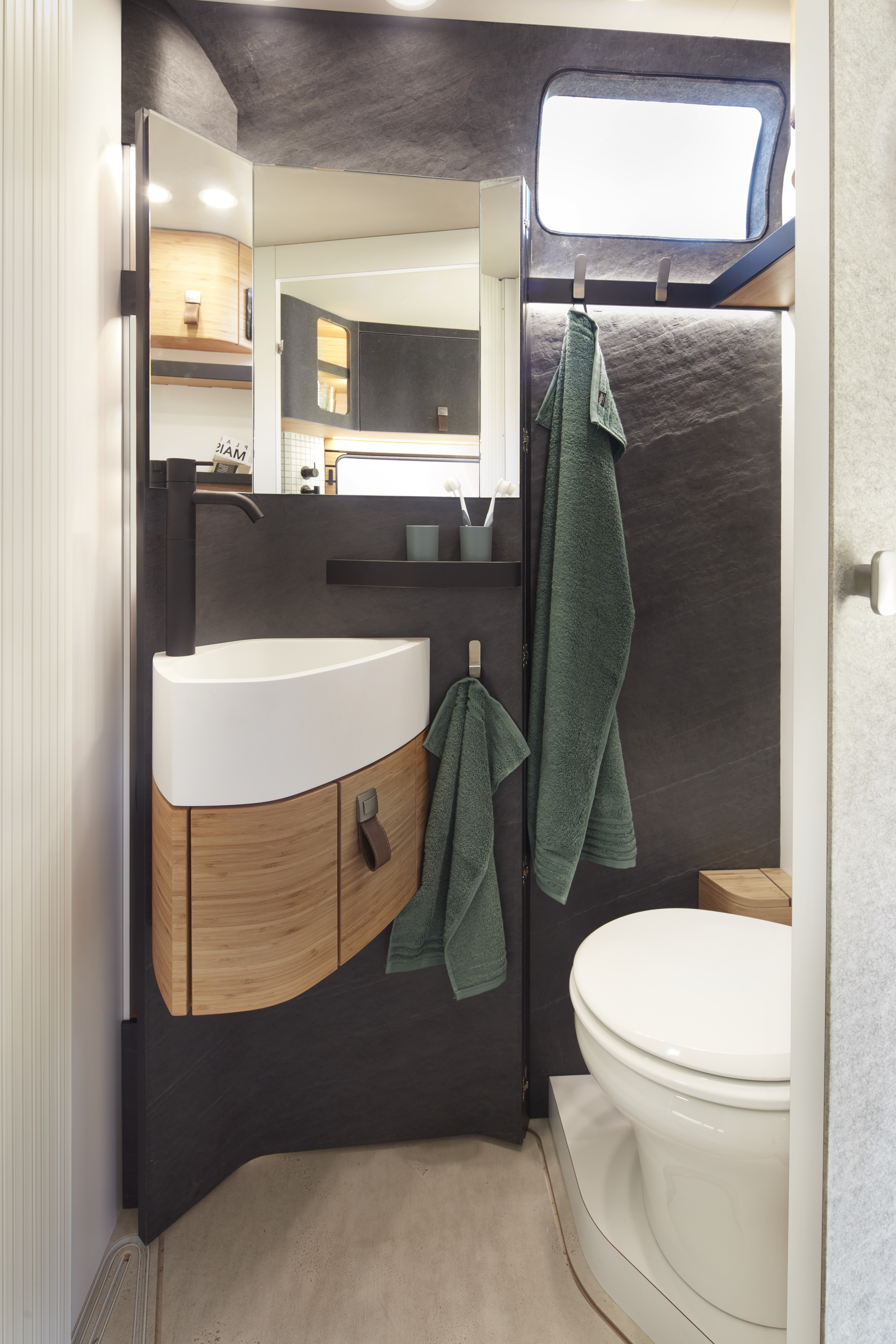 The concrete floor in the living area is also used in the bathroom. Shower water just hits the floor and drains out,  which eliminates the need for those bulky shower trays.

A Nod to the #VanLife Community

Unfortunately you won’t be able to buy the VisionVenture #VanLife Concept RV anytime soon. But the Erwin Hymer is hopeful it can soon include many of these elements into its future RVs slated for production.

“The concept car VisionVenture is our take on modern van life,” says Erwin Hymer’s president Christian Bauer. “A major source of inspiration for this project was the camper community, who have given us new impetus with their creative ideas and DIY conversions. Thanks to the material expertise and technical know-how of BASF, we have managed to put this into practice in a highly realistic concept vehicle. We are confident that we will be able to introduce some elements from this array of innovative and extremely customer-friendly solutions into series production in the not too distant future.”