You are here: Home / Blog / Great Escapes in the Port Townsend Region
This post may contain affiliate links or mention our own products, please check out our disclosure policy here. 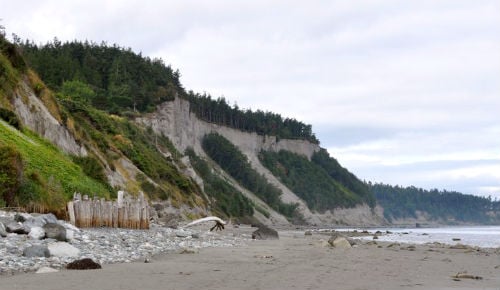 On the way to Glass Beach.

This week I am sharing another little known place to explore on the north end of Washington’s scenic Olympic Peninsula near the historic seaport of Port Townsend.

If your RV travels have never lead you to the Port Townsend area, plan to spend a couple of days absorbing the charm when you go as it offers so much to see and do.

Captain George Vancouver discovered and named Port Townsend in 1792. It was one of the first safe harbors to be found after traversing the open Straights of Juan De Fuca from the perilous Pacific Ocean. Official settlement took place in April 1851 and this new city featuring a deep safe harbor was dubbed “City of Dreams” by those who speculated that Port Townsend would become the largest sea-port of the west coast. Money was poured into the city, stately Victorian houses were constructed for ship captains, a grand court house complete with clock tower was erected and stout wharfs were driven into the bay.

However, better ports with rail lines extending into the growing inland markets of the west could be found farther south in Puget Sound, thus the envisioned wealth and prosperity failed to materialize for Port Townsend. Today, you will find scores of ornate Victorian buildings that are listed on the National Register of Historic Places, shops filled with items produced by local artists, museums, a maritime center, old military installations and more. 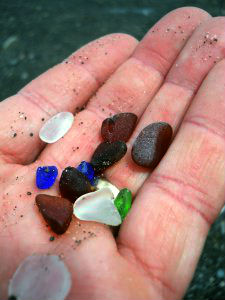 Once you have explored the typical tourism stops and are looking to get off the beaten track, head north of town and enjoy the hike to Glass Beach at McCurdy Point. This is where you can search for sea glass. However, searching for and finding sea glass is only half the fun. The 2.6-mile hike from North Beach Park will take you along the majestic shores of the Straights of Juan De Fuca where you can see across to Vancouver Island, Canada as well as watch huge freighters come and go to Puget Sound. You can also view wildlife such as sea otters, bald eagles, whales and more.

Camping is convenient too as two campgrounds are within walking distance of the trail head. Fort Worden State Park borders the eastern edge of North Beach County Park where you will begin your beach hike and the Jefferson County Fairgrounds is just a few blocks south of the North Beach trail head, which allows you to get a timely start on your hike to beat the tides.

Camping, enjoying a beautiful hike and finding a little treasures are just another adventure in RVing.