You are here: Home / Top Stories / Walking Among Giants
This post may contain affiliate links or mention our own products, please check out our disclosure policy here. 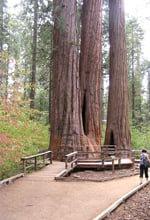 Grossman is a participant in the America State Parks Ambassador program, a youth-led movement that promotes state parks nationally.  Grossman posts photographs and stories about California State Parks on the organization’s website, americasstateparks.org, and her photographs of Calaveras Big Trees are published here. She said the park is one of her favorites because it’s not far from her home and extremely tranquil.

“It is beyond peaceful,” she said. “I love to escape to it.”

The park was created in 1931 to preserve giant sequoias. It was here in 1852 that A. T. Dowd came upon a grove of sequoias and told the world about the massive size of these trees, which are now regarded as California’s oldest tourist attraction.

Calaveras Big Trees State Park has two groves and seven trails that meander through them, including one with a boardwalk that makes for an easy hike. The park also has two campgrounds and picnic areas. The trees and the trails are the big attractions, but there is also fishing in Beaver Creek and the Stanislaus River. A new visitor center, with an area for exhibits and a theater where a film on the park will be shown, was recently built and will have a grand opening May 24. 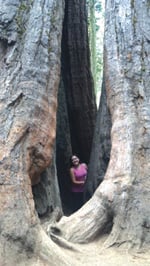 Located at Arnold in the High Sierras northeast of Stockton, the park is open year-round, but the campgrounds are closed in winter. For information, visit parks.ca.gov and bigtrees.org. The social media links are facebook.com/CaliforniaStateParks and Twitter @CAStateParks.

The park’s campgrounds often fill up in summer, but there are other RV parks in the area, including Angels Camp RV and Camping Resort and Frogtown RV Park, both in Angels Camp; Gold Strike Village RV Park in San Andreas, and Golden Pines RV Resort and Campground in Camp Connell.  Also nearby are the Jackson Rancheria Casino Resort in Jackson and the Gold Country Campground Resort in Pine Grove.

Giant Sequoia Facts:
Although giant sequoias once grew across North America and in Europe, they are now found only on the west slope of the Sierra Nevada Mountains in California.
The trees can live for thousands of years. The oldest known giant sequoia lived for 3,200 years.

There are taller trees (coastal redwoods) and older trees (bristlecone pines) but no other tree is as massive as the giant sequoia.