You are here: Home / Blog / “Wall of Bones” at Dinosaur National Monument
This post may contain affiliate links or mention our own products, please check out our disclosure policy here. 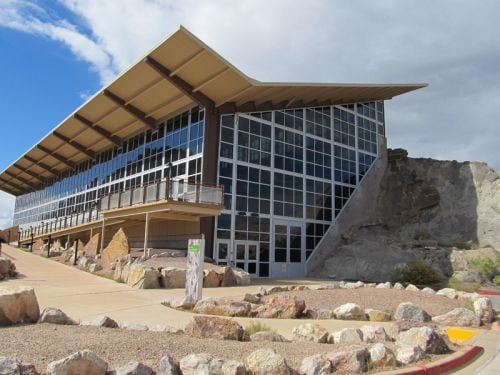 Dinosaur National Monument covers over 210,000 acres and straddles two states. If you’re like most visitors, the “wall of bones” will be your main destination, so you’ll want to head to the west side of the monument located in Utah. There are no dinosaur fossils in the Colorado portion of the monument. The Quarry Exhibit Hall houses the wall of bones (also known as the Carnegie Dinosaur Quarry) and reopened in Fall 2011 after an extensive retrofit. The Hall contains thousands of dinosaur fossils— some you can even touch! There is so much good information here that soon you’ll be an expert on the differences between a meat-eating Allosaurus, long-necked Camarasaurus, and an Apatosaurus— the first dinosaur discovered in the quarry! 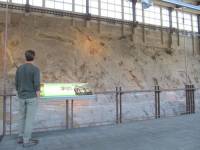 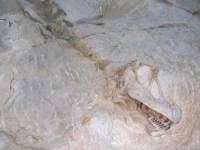 The famous fossils here are “in situ” which means they are still embedded in the cliff face exactly as first found. The quarry was discovered in 1909 by Earl Douglass, a paleontologist employed by the Carnegie Museum in Pittsburgh, Pennsylvania. It all started when Douglass found eight tail bones of an immense Apatosaurus sticking out of the ground, and as he worked to excavate them for shipment back to the museum in Pittsburgh, he found fossils from other dinosaurs, too. Thousands of bones, in fact!  By 1922, the Carnegie Museum decided that it had obtained sufficient fossil material (many full-size skeletons are still on display there) and ceased its operations in the quarry. Douglass remained onsite and joined the University of Utah to continue his work. A year later, Douglass suggested that the government “leave the bones and skeletons in relief and house them.” It took more than 30 years for his vision to become a reality, but thankfully it did. 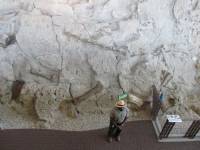 The new Quarry Exhibit Hall has two levels, making it easier to see all the fossils in the rock wall. Park rangers, signage, and murals provide a great education as to what you’re looking at and why particular dinosaurs are unique. Many of the fossils are significant simply because they exist in their entirety. Complete dinosaur skulls are rarely preserved because they are made of very thin bone that is easily crushed. The sand-sized sediments in the Carnegie Quarry are fine enough to preserve bone in great detail but coarse enough to resist compression of the skulls. You don’t have to be a scientist to appreciate the myriad of well-preserved specimens in the wall of bones. The fact that dinosaurs became extinct 65 million years ago, yet their fossilized remains are so clearly on display here makes Dinosaur National Monument an exceptional site.

Entrance fee is $10 per vehicle.

Three campgrounds are located on the Utah side of the monument (Green River is the shortest distance from the Dinosaur Quarry) and the other three are on the Colorado side. Details on camping can be found by visiting http://www.nps.gov/dino/planyourvisit