You are here: Home / Top Stories / Is Walmart Camping Dangerous For RVers?
This post may contain affiliate links or mention our own products, please check out our disclosure policy here.

Every day thousands of RVers across America go “Walmart Camping.” After a long day on the road, these road-weary travelers happily take advantage of the company’s policy to allow overnight stays in cities that don’t restrict it. Most of these guests will return the favor going inside to buy a few items. But when they’re inside shopping, could criminals be lurking around their RVs? 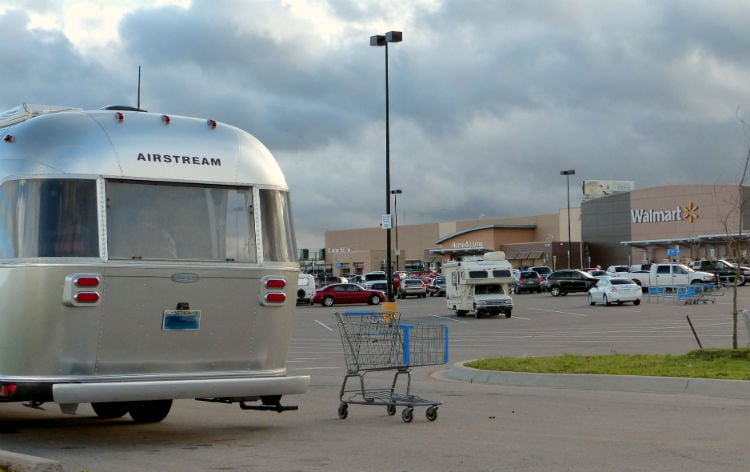 Walmart camping might cost you more than you think. Photo courtesy of Colborne and Deb Shindell.

The hot iRV2 Forums topic, “Walmart Crime” shows that many RVers are grateful for the privilege of Walmart camping. Most do it because it’s easier than hooking up for the night. Walmart’s RVing loyalists unabashedly defend the company and its approval of parking lot sleepovers.

However, as these RVers snooze away for the night, U.S. crime statistics reveal that crime is happening all around them. A recent Bloomberg Business Week analysis of Walmart crime rates in Tulsa, Oklahoma revealed that in 2015, Tulsa police were called to four Walmart stores “just under 2,000 times. By comparison, they were called to the city’s four Target stores about 300 times.” Crimes in these Tulsa Walmart stores included:

According to police reports, 24-hour Walmart Supercenters are hubs for this kind of illicit activity. Since many towns have little else open at that hour, these locations attract more people than competing retailers. “By pure numbers, the crime is going to be where the people are,” said Charles Fishman to Time Magazine in the article “Low Prices, High Crime: Inside Walmart’s Plan to Crack Down on Shoplifting,” Fishman examines Walmart’s impact, both good and bad, on communities in The Wal-Mart Effect.

The sobering reality for all shoppers and overnight guests is that police blotters demonstrate that crimes happen outside of WalMarts. Will that stop RVers from Walmart camping after a long day driving? Maybe, maybe not. Those who don’t like Walmart to begin with will avoid it while others will continue to support a company that offers overnight accommodations for the cheapest prices in town.

“We use Walmart when ever it is convenient. We have seen no issues. In fact I think the use of their parking lot by RV’s adds to their security. In the end we all benefit. We end up stocking up at their store – we all benefit. My hat if off to Walmart. It is a smart marketing idea that is to the benefit of all.” – Davidej M

What’s your opinion about Walmart camping? Do Walmart crime statistics impact your feelings about overnight stays? Share your thoughts below.