You are here: Home / Blog / West Glacier Boondocking
This post may contain affiliate links or mention our own products, please check out our disclosure policy here.

A few weeks back I shared my bad experience camping at the Chewing Blackbones Campground operated by the Blackfeet Tribe. As I mentioned in those entries we would have been boondocking had it not been for the tribal land adjoining the east boundary of Glacier National Park leaving no public land on which to boondock. 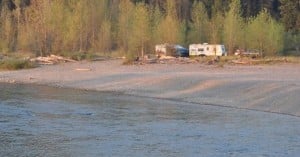 Our River Side Boondocking Site

Thankfully along the west boundary of the park you don’t have this problem as there is public land on which to boondock administered by the USFS (United States Forest Service). As always, I had determined places to boondock via the internet prior to our arrival at West Glacier. One spot was located at the confluence of the Middle Fork of the Flathead River and the North Fork of the Flathead River. The other was what appeared to be an abandoned gravel pit just a half mile up a forest service road off of Hwy 2. The spot on the river appeared to have potential access issues (narrow access road and dropping onto the river bank as determined via Google Earth), while the gravel pit looked accessible by most any RV. Being 90 plus degrees, we opted to check out the river option upon nearing the west entrance. Arriving at the river site and inspecting the access, we found it to be a bit more sketchy than anticipated, the access road was brushy, contained several deep vehicle sized dried mud holes to navigate and the fore mentioned drop to the river bank. Once on the gravel bar of the river, traversing to camp would be a piece of cake. The desire to camp on the water quickly won out over the adverse access. Soon we were swimming in the river with our RVs parked for the night less than 100 feet away! It’s also worth noting a short wade across the north fork would have taken us within the boundaries of the national park.

Boondocking within wading distance of Glacier National Park, just another adventure in RVing! 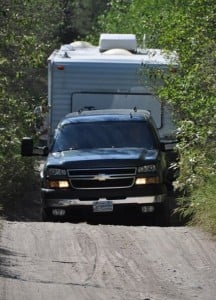 For those that would like to know more:
The river boondocking site is located at the southwest corner of the Blankenship Bridge which spans the river. You will find the access road at: N48 27.930 W114 04.481
The road is best suited for short, high clearance RVs such as truck campers mounted on 4×4 pickup trucks or off road type class B motorhomes like a Sportsmobile that don’t mind dragging some brush down the sides. While there are other easier access points to the river at the other three corners of the bridge, none offer overnight camping.

Those with longer, low clearance RVs with a nice exterior finish will be better off heading to the mentioned gravel pit which you can view on Google Earth at: N48 29.453 W113 56.578
Both sites are just a short drive from the west entrance of Glacier National Park.

Note: Both sites are shown as approved dispersed camping (aka boondocking) locations on the Flathead National Forest MVUM (Motor Vehicle Use Map)