You are here: Home / Top Stories / Where Wood Became Stone
This post may contain affiliate links or mention our own products, please check out our disclosure policy here. 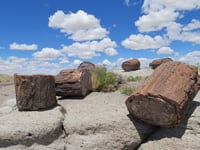 Given its name—Petrified Forest National Park—of course you would expect to find one of the world’s largest concentrations of wood that has turned to stone, but this northeastern Arizona park offers much more. There are ancient petroglyphs, pueblo ruins, a national historic landmark, colorful rock formations and dinosaur fossils. Plus, it is the only national park that protects part of historic Route 66. Those are a lot of claims to fame! You can drive through the park in a couple of hours and admire the scenery through the windshield, or choose a developed hiking trail or two and get up close and personal with the park’s colorful past.

So as not to miss any highlights, stop first at the Painted Desert Visitor Center as you enter the park from Interstate 40 and watch the 20-minute orientation movie. Or stop at the Rainbow Forest Museum if you enter the park from the south off Highway 180. Once armed with a visitor map and an understanding of this special place that became a national park in 1962, you’re set to take full advantage of the plentiful pull-offs and designated scenic stops. Don’t be surprised if the first question you are asked when inside the park is if you have any petrified wood already with you. Claim it if you do. Theft of this limited resource is taken very seriously by the park service. 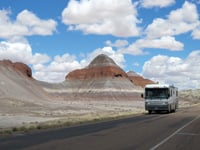 Flanking the 28-mile paved park road is arid Painted Desert scenery of mostly colorful sandstone and scrub. Depending on the time of day, you’ll see deep lavenders and rich grays, reds, oranges and pinks. The hues are especially brilliant at sunset. The Teepees and Blue Mesa areas have some of the prettiest clay and sandstone formations in the park. The Painted Desert and the Petrified Forest are really one in the same. They have the same rock layers, plants, animals and fossils, but the Painted Desert is a vast landscape that stretches from here to Grand Canyon National Park. Even though it’s named the Painted Desert and the terrain is dry, the ecosystem here is not officially classified as desert. It’s actually one of the largest areas of intact grassland in the Southwest.

Once a Tropical Climate
During the Triassic Period 225 million years ago, 200-foot tall conifer trees grew along the banks of many streams and giant amphibians, small dinosaurs and lush ferns thrived here. Slowly but surely that tropical environment changed, but luckily much of the plant and animal life was fossilized during the process. As the stately trees fell into the swamplands, they were buried beneath layers of silt. Over time, chemical reactions occurred and tiny quartz crystals formed, encasing the wood and turning the trees to stone. In fact, petrified wood is so hard, you can only cut it with a diamond-tipped saw! 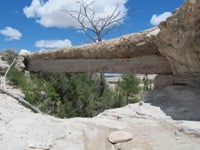 Thanks to millions of years of erosion and changes in the earth’s pressure, the logs once again saw the light of day, but in a completely different form—colorful petrified wood. The rainbow effects do not result from the type of wood, but from the chemistry of the petrifying groundwater. Iron oxides give petrified wood its red, yellow, and orange hues. Manganese oxides produce blues, purples and deep blacks; the original carbon produces shades of gray.

Just two miles down the road from the Painted Desert Visitor Center is the Painted Desert Inn National Historic Landmark. Built in 1924, the adobe-style structure doesn’t look like much from the outside, but it once served as a trading post and restaurant for travelers along Route 66. In the late 1930s, it was enlarged and extensively remodeled by the Civilian Conservation Corps, and features a blend of Spanish and Indian styles and designs. Look overhead in the Trading Post room to see hand-painted glass skylights based on ancient southwestern Indian pottery motifs, and hammered-tin chandeliers that follow Mexican designs. The wall murals in the lunch room and dining room were painted in the late 1940s by Fred Kabotie, a Hopi Indian artist. The murals tie the ancestral Puebloan people of the region to the Hopi people of the 1940s and today. While Painted Desert Inn gained status as a National Historic Landmark primarily due to its architecture, the murals of Fred Kabotie made a significant impact on the nomination.

Don’t miss the park’s Puerco Pueblo ruins, where you’ll see evidence along an easy three-mile loop trail of the Indians who lived in the area as early as the 12th century. Agate House at the south entrance of the park is another small pueblo you can see from a two-mile trail. Over 500 archeological sites lie scattered throughout Petrified Forest, but most are inaccessible in the back country. Puerco Pueblo may have been home to about 200 people and contained over 100 rooms. Archeologists say it used to be a one-story village built around a rectangular plaza. Without doors or windows in the exterior walls of the pueblo, entry into the village was by ladders over the exterior wall and across the log, brush and mud roofs of the room blocks. Rooms around the plaza were used for storage and as living quarters. Within the plaza, three underground rectangular kivas have been identified. It is thought that an extended drought around 1380 forced the inhabitants of Puerco to move elsewhere, leaving behind pottery fragments, stone tools and petroglyphs (rock carvings). 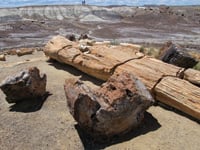 In addition to the glyphs along the south end of the Puerco Ruin Trail, Newspaper Rock has an unusually dense concentration of well-preserved mysterious carvings. Newspaper Rock must be admired from a distance (spotting scopes available at the viewpoint), whereas you get a much closer view of glyphs along the Puerco Ruin Trail.  Desert varnish is a dark, thin coating of iron or manganese that slowly forms on the rock surface. Petroglyphs are made by chipping through this coating to reveal the lighter rock beneath. No one knows for sure what the symbols mean. Are they calendars, depictions of daily life, directions to something, or maybe just ancient graffiti? If you visit enough petroglyph sites throughout your travels, you’ll start to see patterns emerge—some of the same dots, squiggles, footprints, handprints, animal-like figures and more appear repeatedly so perhaps they mean the same thing no matter their location.

Crystal Forest, Giant Logs Trail, and the Long Logs Trail showcase the best and largest concentrations of petrified wood in the park. The petrification process preserved each tree a little differently, depending on the environmental conditions when it fell, so no two pieces are alike. Some of the logs look so real you’d think they were only recently cut down—the wood grain has been preserved in detail and the pieces are as symmetrical and sharp as those made by a saw blade. Other logs barely resemble wood at all, especially the prettier pieces. Some of the colors are so amazing you’d swear the logs were man-made and had never been a living tree. The Crystal Forest loop is paved and three-quarters of a mile long with interpretive signs along the way and a covered observation area. “Old Faithful” sits at the top of the Giant Logs Trail and is almost 10 feet across the base. The Giant Logs and Long Logs trails are located at the Rainbow Forest Museum area at the very south end of the park. 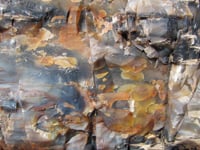 If you want to take home a little petrified wood as a souvenir, be sure to buy it at the gift shop. Removal of petrified wood (or any natural or cultural object) is strictly prohibited and punishable by federal law. You’ll be reminded of this over and over again on park signs and in brochures, but for good reason. Over the years, most of the petrified wood that was originally found in this area has been damaged or stolen. So unless Mother Nature reveals more through erosion, what you see now must remain for future visitors.

The vehicle entrance fee at Petrified Forest National Park is $10 (good for seven days). The park is open year-round. The paved park road is suitable for larger RVs, even with a towed vehicle. The only points with a tight turnaround if other vehicles are there are Pintado Point and Agate Bridge.  Petrified Forest does not have a campground.  For park information, call  (928) 524-6228 or visit nps.gov/pefo.