You are here: Home / Top Stories / Travel On The Historic Whoop-Up Trail
This post may contain affiliate links or mention our own products, please check out our disclosure policy here.

by TC Wait
November 20, 2019Filed under:
Table of Contents show
See also: The Kentucky Bourbon Trail – Tips And Advice For A Road Trip Like No Other

If you take the time to read the informational kiosks that are often found along rest stops on interstate highways, you can learn a bit about the history of an area.  While recently traveling through northern Montana along I-15, we learned that our route was approximately following the old Whoop-Up Trail.

Looking across the vast expanses through the rolling grasslands of the northern prairie, deeply cut by meandering river channels, you can almost see ghosts of the old frontier west wagon trains moving along.  Likely the landscape has not changed much over the last 150 years. 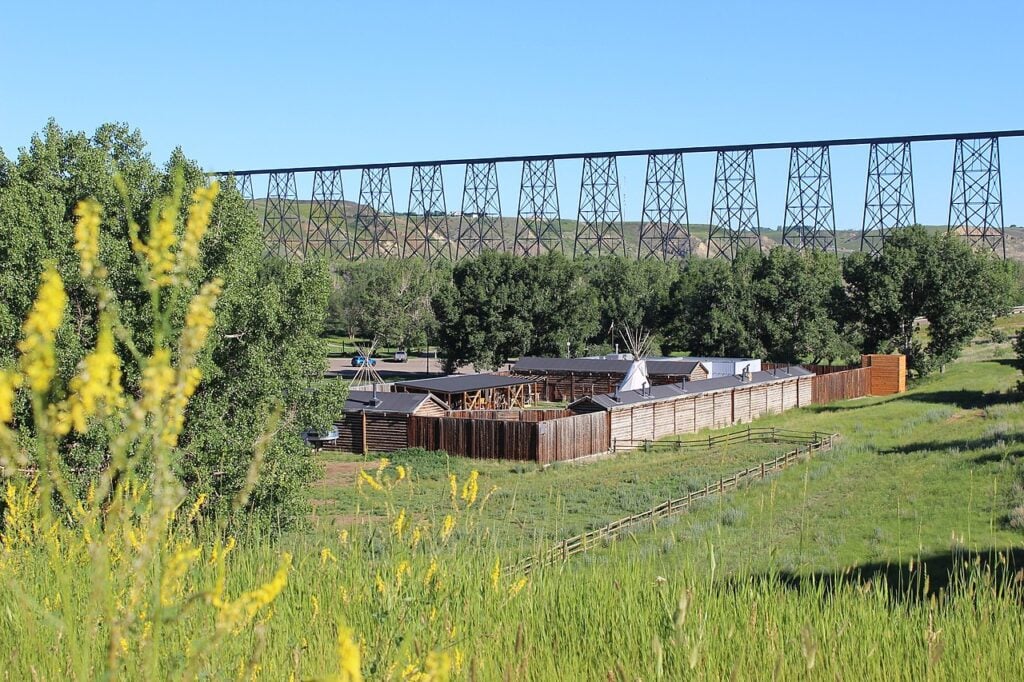 The Whoop-Up Trail was a trade route between Fort Benton, northeast of Great Falls, Montana and Fort Macleod in Alberta, Canada.  Fort Benton, a National Historic Landmark and the oldest settlement in Montana, was established in the 1840s as a trade hub along the banks of the Missouri River.

Steamboats made it to the end of navigable waters at Fort Benton in order to carry goods, furs, and passengers between the trading post and other settlements farther to the east.  Fort Benton was the dropping off point to access the frontier lands of the Northwestern US and the Canadian outback.

The Whoop-Up Trail was given that name largely because most of the trade done along the route involved illegal whiskey.  Whiskey was outlawed during the late 1800s, but that didn’t result in any real police enforcement in either Montana or Alberta.  As a result, the trade of whiskey, tobacco, firearms, and ammunition was good business.

According to legend, a firewater concoction called “Whoop-Up Bug Juice” was a hot commodity, created by boiling alcohol, ginger, molasses, red pepper, and chewing tobacco together.  In addition to the illicit trade, the Whoop-Up Trail was also used to freight furs, food, equipment, and clothing between various government posts in western Canada.

Because of the nature of trade moving along the trail, the route was often targeted for raids from Indians, horse thieves, and free traders with mixed reputations. Wolf hunters who used less-than-humane methods to kill wolves for bounty money, were loathed by Indians and traders alike. 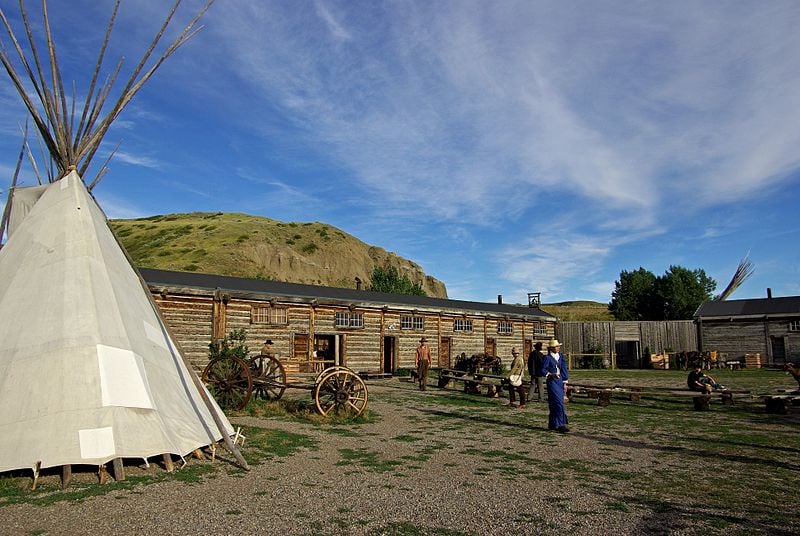 Many of the colorful trading posts along the route, Fort Stand-Off, Robber’s Roost, etc., were little more than rough log cabins that were frequently burned down at the end of each season by local Indians.

Fort Whoop-Up (originally known as Fort Hamilton) was a whiskey trading post near Lethbridge, Alberta, a seven-day horse ride from Fort Benton. To prevent attacks, the fort was a self-contained community with heavy timber walls and blockhouses mounted with cannons to guard the approaches.

The spread of American traders into Canada was further increased by the enforcement of prohibition in Montana in 1869. At the height of lawlessness in 1874, the area came of interest to the North-West Mounted Police.

After a publicized march to Fort Whoop-Up (where the Mounties didn’t find any whiskey on the premises), the NWMP established a permanent post at Fort Whoop-Up. Their presence dramatically decreased the illegal whiskey trade, although vendors selling legal goods still used the trade route between villages and outposts.

A fire in 1888 burned the fort’s NWMP barracks. Subsequently, the Mounties declared the whiskey trade to be successfully shut down and deserted the post.

When Prohibition became US law in 1919, the old Whoop-Up trail again found use, this time with a reverse whiskey-runnin’ route.  Bootleggers would bring Canadian booze south into the US to supply Montana establishments.

The Whoop-Up trail is one of the most infamous whiskey trading routes from the Old West!  Now, who wants a drink?

See also: The Kentucky Bourbon Trail – Tips And Advice For A Road Trip Like No Other