You are here: Home / Great RVing Destinations / Why New Orleans Mardi Gras Needs to be on Your RV Bucket List
This post may contain affiliate links or mention our own products, please check out our disclosure policy here.

It’s Carnival season, time to pack up your RV and head to the wildest place to experience it: New Orleans, Louisiana. 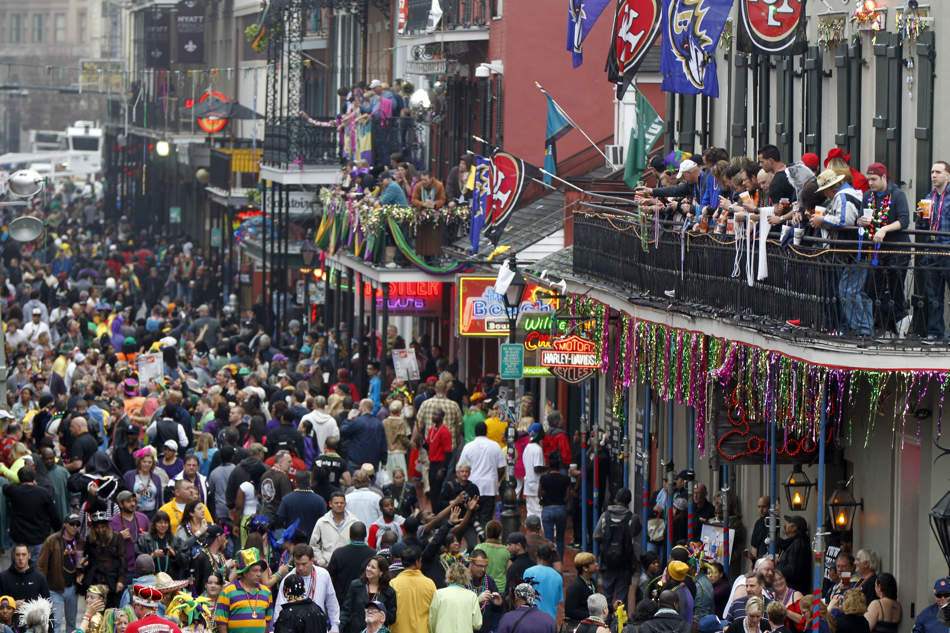 If you don’t have a reservation for this year it’s a toss up whether you’ll get into a RV park near “NOLA” but regardless, we’re going to tell you why you need to put this not-to-be-missed event on your calendar now, so can make reservations for next year.

Why New Orleans for Mardi Gras?

Every year, thousands of RVers flock to the south for the Carnival season of daily partying and festivities. While celebrations take place in many different towns and cities from Texas to Florida, the biggest celebration in the U.S. takes place in New Orleans’ French Quarter.

Everything kicks off 46 days before Easter then peaks on Mardi Gras (a French term that translates to “Fat Tuesday” in English). In New Orleans this tradition dates back to 1857. The 12 days preceding Mardi Gras is when the biggest festivities take place around the city, from the famous parades with revelers tossing beads and candy into the crowds to masked costume balls of elaborate design.

According to the New Orleans Convention and Visitor’s Bureau, Mardis Gras is a legal holiday in New Orleans and the entire city honors it with non-stop partying until 11:59pm on Fat Tuesday. That’s because when the clock strikes midnight, the partying stops and takes revelers into Ash Wednesday, which kicks off the Lenten Easter season of restraint and deprivation.

What to Expect at Mardi Gras

Since Mardi Gras is New Orleans’ prime tourist season, prices on everything go up exponentially. Even so, taking your RV is still a great way to save money and comfortably recuperate in-between all of the celebrations.

Wherever you decide to park your home on wheels, reservations are a must. When you make that reservation, prepare for sticker shock. You will not find RV park bargains for Mardi Gras and if you do be leery – cheaper nightly rates mean that the park is probably prone to criminal activity and in a part of town you wouldn’t want to be in, day or night.

Although many RVers will warn Mardi Gras newbies about increased crime, muggings and vehicle theft during the season, others are more ambivalent and call it “Bucket List” event not to be missed. What these RVers will tell you is that just as you would in any large city, practice common sense, leave your valuables at home, park far from the city center and use shuttles and taxis for getting around and you’ll likely be just fine. To ensure your RV is safe, book a reservation far in advance at any of these popular New Orleans RV parks.

French Quarter RV Resort
Located in the heart of New Orleans, French Quarter RV Resort is the closest you’ll get to the action. Park visitors say the 10′ wall around the park and proximity to the police station across the street will give you a sense of security during your stay. Because of the location, expect to pay no less than $199 a night for Mardi Gras peak celebration days.

New Orleans West KOA
This KOA park is also highly rated and only 20 minutes from downtown New Orleans. With a free shuttle and rates starting at $45 a night, it’s a safe bargain close to the city but not too close.

Jude Travel Park
Like the New Orleans West KOA, Jude Travel Park is about 20 minutes outside of the city but its proximity and price make it a great bargain for under $100 a night. This family-owned, small and modest park is located right on public transportation lines, making city commutes less expensive than going by taxi. 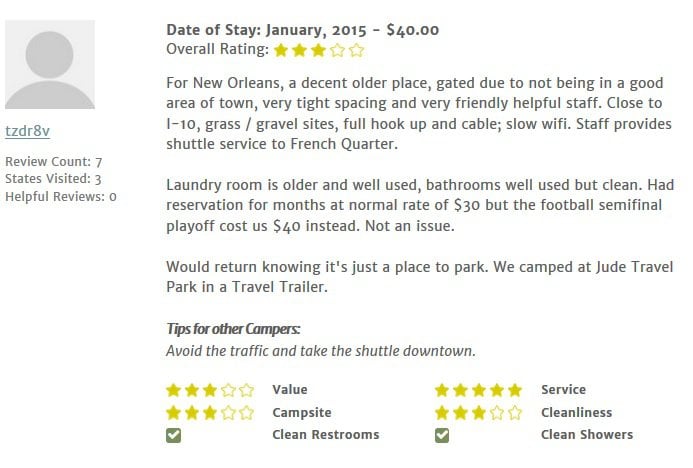 Do you have New Orleans travel tips for Mardi Gras? Share your experience and join the conversation in the iRV2 Discussion Forums.