You are here: Home / Top Stories / Why RV in Mexico?
This post may contain affiliate links or mention our own products, please check out our disclosure policy here. 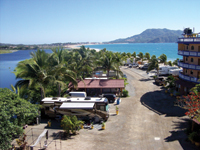 Many people ask me why I would want to take an RV down into Mexico rather than just camp in the U.S. and Canada? When most people have reached retirement age, they either want to stick with what they know and feel comfortable with, or have a desire to experience something new and different. It is easy to identify those in the first group; they are the ones who will tell you there is too much to see in the USA to have time to head south. I am in the other group. I bought an RV because the traditional senior activities of cruises and “all-inclusive” resorts have never held a lot of appeal for me.

One winter season in Arizona was enough to convince me that I needed to push my comfort zone a bit more. Possibly my lack of interest in golf and playing cards had something to do with it, but I think the urge for a different cultural experience was the true driving force. By year two, I had headed across the southern border and have never looked back. 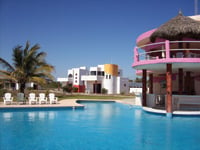 The big mistake that many make is assuming that RVing in Mexico is cheap. That is not necessarily the case. A good RV park in Mexico can run $600 a month. Fuel and food are cheaper, but one also has to factor in the purchase of Mexican insurance, which can run close to $1,000. The better roads also have tolls, which are not particularly cheap, especially for a big rig.

What is in evidence is a sense of camaraderie in RV parks that you seldom see in Canada and the United States. People tend to socialize more. A new rig pulling in usually attracts a crowd of current residents eager to see where the newcomers are from and where they have been. Maybe it’s a shared sense of courage (or stupidity) in traveling down there. You seldom see people set up their satellite dish then disappear inside their motorhome for the next several days, something most of us have observed at home. Mexican RV parks are very social places where after a month you likely know all there is to know about your fellow campers. Many lasting friendships are formed. 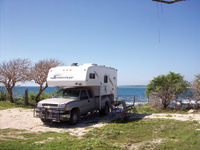 So what are Mexican RV parks really like? Although some are up to North American standards, most are lacking in one way or another. Do not expect 50-amp service; you may get 30-amp if lucky. Electricity is expensive in Mexico and people who run their air conditioners all day long are frowned upon by their fellow campers who fear rate increases or the future installation of individual meters. Water is also a bit of an inconvenience, as you cannot drink out of the tap. Somehow, however, all of this adds to an ambience of adventure, while still maintaining the comfort of the RV lifestyle.  You feel rather like a pioneer, complete with a sense of superiority over your fellow RVers back home.

There are plenty of minor irritations while RVing in Mexico. Park construction is still a bit of learning curve for Mexican operators. For example, concrete pads may be angled the wrong way, making it a challenge to back in a fifth-wheel, or the services may be on wrong side. Pull-through sites are rare.

One phenomenon I have noticed over the last few years is the emergence of the native Mexican RVer. Most are in older Class C’s or travel trailers, but occasionally you will see one in an expensive diesel pusher. One I encountered last year held a huge barbeque for the park, complete with a mariachi band to entertain the other campers. He was obviously not suffering for funds, but when did you last see something like that in Canada or the U.S.?

The week of Semana Santa leading up to Easter is big for Mexican campers, and most parks fill up with tents and Mexican RVers, most of whom are eager to party with the gringos. The language barrier does not appear to be an issue. This is one week you want to stay in one location and stay off the roads. 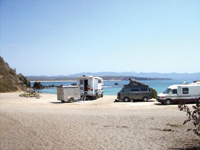 Reservations are not required for most Mexican RV parks. There are a few exceptions. Parks like Laguna del Tule in St. Patricio Melaque and the Canadian-run La Penita RV park near Puerto Vallarta often fill with regulars who spend season after season there. It is sometimes necessary to make a reservation a year in advance, but most will have room for one or two rigs on a short-term basis, so you can try them out. An exploratory trip, sampling many different parks, is probably the best way to find the one where you may want to spend the winter in the future. An organized caravan may be of help here for first timers.

On the subject of caravans, if you are not traveling in a caravan, you should check their websites for schedules and try to avoid them. This is especially true in Baja and also parts of the mainland frequented by large French Canadian caravans that can often exceed 40 rigs. A responsible caravan operator will ensure that the RV parks they use do not push out regular customers, but unfortunately some are not that considerate. Mexican park operators are not always smart businessmen and often have problems looking at the long-term picture, preferring to go for short-term gain instead. Many, for example, will respond to a drop in business by raising prices to compensate, the exact opposite of what they should do.

Another aspect of RVing in Mexico is the physical risk to your rig, especially a large one. Mexicans are not very good at cutting trees back, for example, and one always has to be on guard for low branches, especially on secondary roads and when navigating through towns. This is one good reason to use toll roads. It is easy to get yourself trapped in towns with one-way narrow streets, low archways and other hazards. It is not a bad idea to scout out a route on bikes or with a tow car first if you are not sure of your route. Keep in mind that many Mexican towns pre-date the automobile by several hundred years.  I have even suggested to some RV park owners that they trim the trees on the route into their parks and am usually rewarded with a shrug. One good reason to check your route first.

Feeling Safe
Finding somebody else to travel with who is experienced is always a good idea, even for return visitors. If you do not want to use an organized caravan, I have a website for this purpose at mexicotravelbuddies.com. You will often find others there looking for travel companions. If you are lucky, you will find somebody who is experienced with your route. Others in the RV park are also a great source of information on what to expect farther down the road.

No article or series on Mexico is complete without dealing with the fear factor, so let’s get it out of the way. I have now spent seven winters RVing in Mexico without incident. Statistically, if you are American, you have nearly twice the chance of being murdered in your own country as you do in Mexico. Curiously enough, Canadians are more likely to be murdered vacationing in Australia than Mexico, based on number of nights spent in either country. In the last two years, I have seen several single women traveling in Mexico on their own, and the blogger known as Tioga George boondocks full-time all over Mexico in his RV he calls Ms. Tioaga. My own attitude to all this can be easily summed up. I did not spend 30 years working to spend retirement on the couch watching the National Geographic channel. Neither did I intend to spend it freezing my toes off.

My advice is to give Mexico a try; you will probably be glad you did. If you are still too nervous, then use a commercial caravan the first time or find others to travel with. At least your vacation stories will be far more interesting than those of your neighbor who went to Yuma for the winter. There is a whole new world of RVing waiting for you south of the Rio Grande. Get up the courage, and just do it.

Paul Beddows is former president of the North American Truck Camper Owners Association. He presents seminars on RVing in Mexico and is a frequent contributor to RV magazines on the subject. He is currently US/Canada rep for Caravanas de Mexico, a commercial caravan company, (mexicorvbuddies.com). He is always willing to answer questions if you email him at paul@natcoa.com.