You are here: Home / Blog / Book Review: ‘Win at Losing’ examines the positives of coming up short
This post may contain affiliate links or mention our own products, please check out our disclosure policy here.

Forrest Gump said in the movie of the same name, “My momma always said, life was like a box of chocolates. You never know what you’re gonna get.” There is not a successful person – past or present – who has not received their share of setbacks in life, no matter how successful they might have become.

Sports journalist Sam Weinman examines that concept in a recently released 256-page book “Win at Losing – How Our Biggest Setbacks Can Lead to Our Greatest Gains”. A digital editor at Golf Digest, Weinman draws on the winning and losing stories from professional athletes, business executives, politicians and Hollywood stars to illustrate how losing is actually a big part of success. 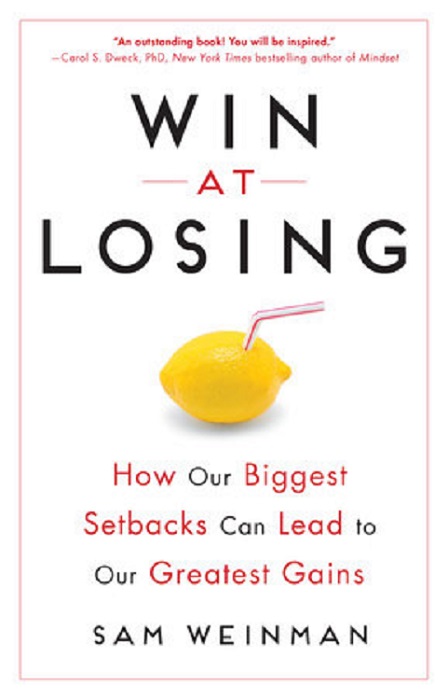 One of the most endearing and heartfelt chapters focuses on professional golfer Greg Norman. On the success scale, Norman was gigantic, but on the failure monitor, he was off the charts! The chapter “A Masters in Humility: How Greg Norman Won Fans by Falling on His Face” summarizes the many disappointments the professional golfer experienced during his heyday in the spotlight.

Those many disappointments resulted in a fan base that can relate to Norman’s humility after defeat. We’ve all been there, and the thousands of letters Norman received after his crushing defeat at the 1996 Masters are a reflection of how gracefully he accepted defeat. Leading by six shots going into the final round, Norman imploded and ended up losing by five strokes to Nick Faldo. There were other similar defeats where Norman simply choked, but again, he reacted with total class and humility, unlike the majority of professional athletes today.

The author shares that through some of the examples in the book. He expanded the topics to include business and politics, among other areas. “Sports was a fitting entry point for me because it was the most immediate example with my kids, and because I make my living as a sports journalist,” said Weinman. “Even the sports stories I tell are really about the universal emotion of disappoint – about wanting something badly and having to pick up the pieces when things don’t go the way you want. If you have never picked up a ball before, you can still relate to that.”

Bob Rotella, New York Times bestselling author of “How Champions Think” offered a summary of Weinman’s book: “We always hear and read a great deal about winning and the joy of success. ‘Win at Losing’ is all about the other side of winning and the truth that no one wins without losing many times. Learning from losing is a big part of success. ‘Win at Losing’ is a wonderful read.”

Sam Weinman’s “Win at Losing – How Our Biggest Setbacks Can Lead to Our Greatest Gains” retails for $16-26 and can be found at TarcherPerigee Publishers, on Amazon or at Barnes & Noble.