You are here: Home / Blog / True Stories Of A Terrible Fisherman
This post may contain affiliate links or mention our own products, please check out our disclosure policy here.

You may have read in my previous article that I’m relating a series of true fishing stories to determine if I can legitimately claim the audacious distinction of “world’s worst fisherman.”  The following stories are even further examples of why I can claim this unfortunate title.

Hired a professional to show me how

Out of a desire to improve my fishing acumen, I hired a guide to take me steelhead fishing on the (appropriately named) Salmon River on the Oregon Coast.  I asked my friend, Annette, to accompany me. I knew she would just go along to humor me, even though she had no real interest in fishing.

I, on the other hand, saw it as an opportunity to learn from a professional.  I studied her gear, technique, presentation, lures, timing, and the rhythm of “bouncing” the bait along the bottom of the river at the confluence of the faster and slower moving currents. 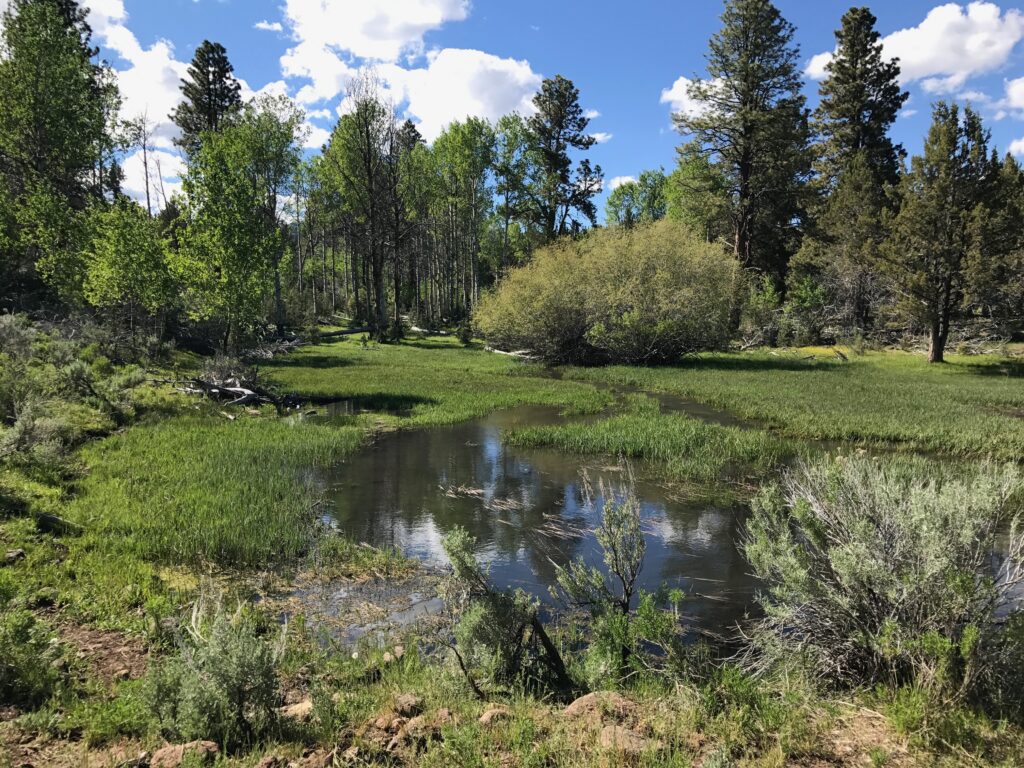 A tiny fishing hole on the backside of nowhere in southeastern Oregon. Photo by Peggy Dent

As I fished, I tried to control my breathing.  My full focus was on the “feel” of the line and rod in my hand, trying to discern the exact moment the bait stopped bouncing along the bottom of the river. I didn’t notice the uncomfortable little drift boat, the pounding rain, my wet clothes, or the cold that was numbing my face and fingers.  My whole being was focused at the end of the line, trying to feel the bounce.

A good fisherman in spite of her enthusiasm

My friend was less enthusiastic about the fishing and much more aware of the cold pounding rain.  Yes, she was fishing, if you can call it that, but her efforts were casual, relaxed, and distracted.

I’m ashamed to admit that it aggravated me a bit, that she was the one to hook and land the 30-pound steelhead. Additionally, as a vegetarian and an animal right’s activist, her only concern was to get the poor fish off her line and back in the water.  I had fished with her many times before and after that trip, and it was an irritating irony that she always managed to catch fish and I always managed not to. 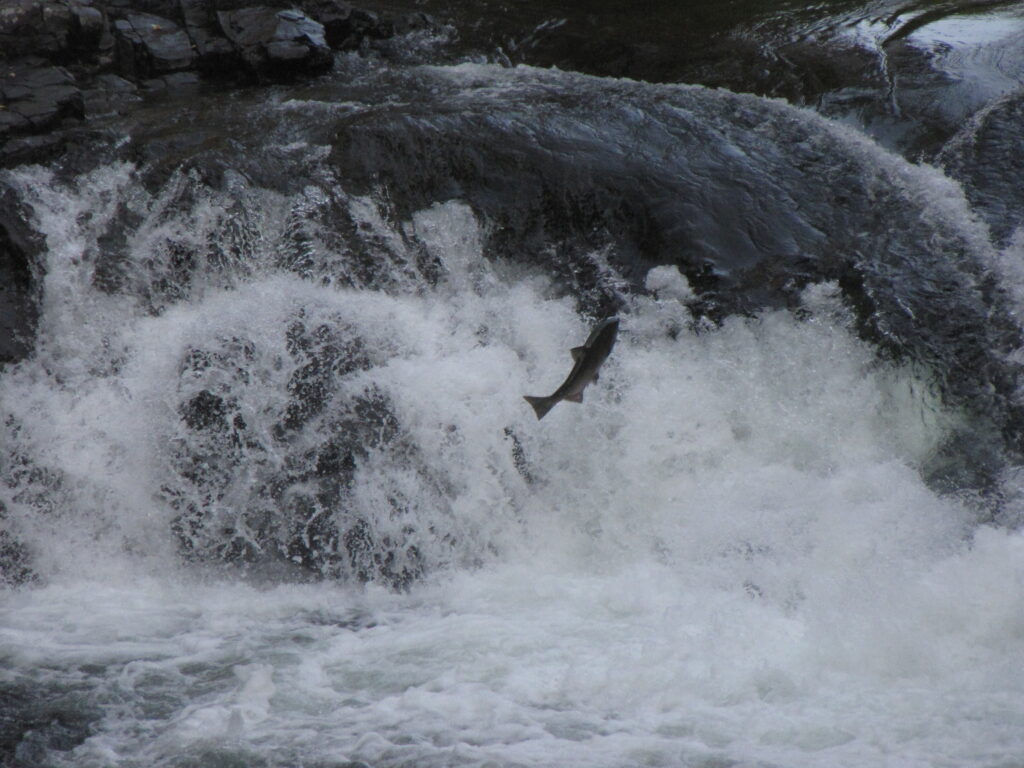 Salmon jumping up the Washougal River. Photo by Peggy Dent

Friends who were almost as inept at fishing

It wasn’t just me that was a ridiculously poor fisherman. I hung around a few other fishing friends who were equally inept as me, but at least they occasionally caught a fish or two, leaving the world’s worst fisherman title to me, and me alone.

It was early in the season.  Hagg Lake, in Western Oregon, was still too cold for skiers, so we fishermen had the lake to ourselves.   We had been fishing for less than an hour when Annette, (why she was such a good fisherman, I will never know) hooked a nice 12-inch Rainbow Trout.

Lori put the engine in neutral and we all pulled in our lines so Annette could land the fish without getting tangled in the motor or anyone’s gear.  I leaned my pole against the transom and let the tackle dangle in the water off the back of the boat.  I had helped Annette land her fish and was hurrying to get it out of the net, and off her line, when Lori slipped the motor back into gear so everyone could resume fishing.

I heard the motor engage, and I looked up from the fish in my hands, just in time to see my brand-new pole flying off the back of the boat. My tackle had gotten entangled in the prop, which catapulted the pole about 12 feet off the back of the boat and into the water.  I had a split second to decide what to do as I watched my new pole quickly sinking out of sight in the cold murky water. 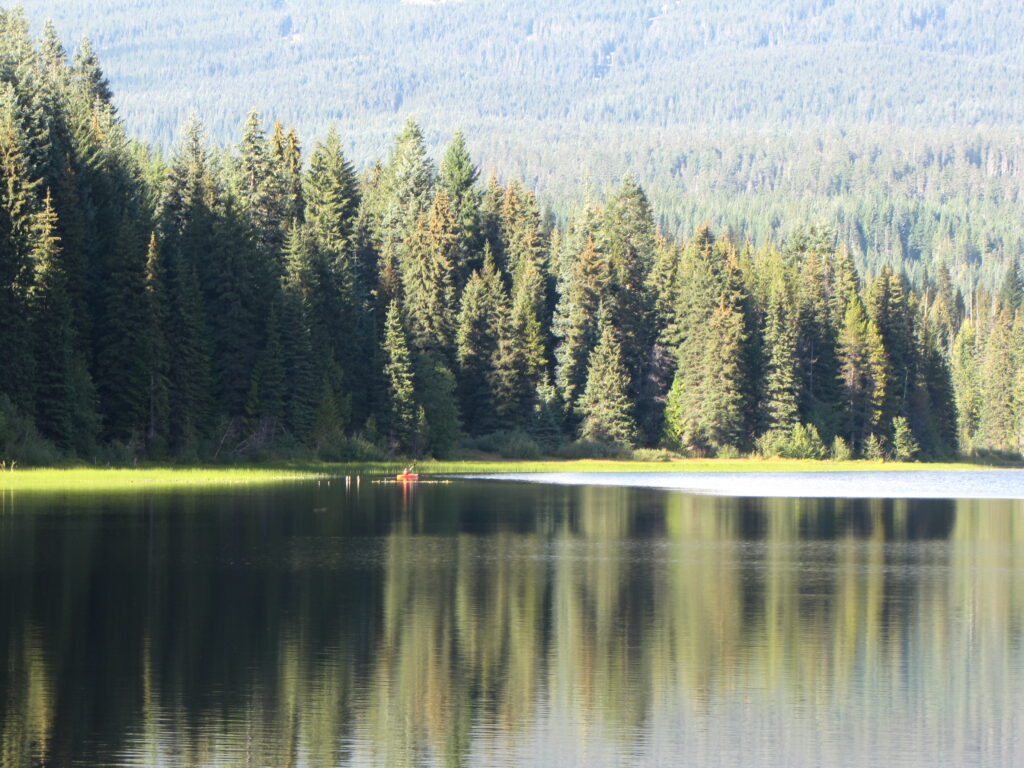 A split second to decide

In one motion, I dropped the fish, leapt forward, jumped quickly up onto an ice chest, and dove over the transom off the back of the boat.  In that instant, when I was in the air and before I hit the water, I had a moment to think about what I had just done.  I did a quick inventory and thought that I might not have made the best decision.

I was wearing my contact lens and my watch (which was not waterproof). I had my wallet and paper fishing license in my pocket, and I was wearing all the clothes I had brought on this trip because it was quite cool outside. That was all the time I had to think about my decision because the next thing I was aware of, was the searing cold of the water as it engulfed my whole body in one shocking take-your-breath-away instant.

Underwater, I opened my eyes, hoping my contacts were still there, and started scanning the murky water for my pole.  I caught a glimpse of it sinking into the depths of the lake, and with all my strength, I began swimming toward it as fast as I could.

After only a few vigorous strokes, I was able to grab my pole and turn for the surface, which at that point was much further away than I had anticipated. The cold water and physical effort had depleted my oxygen and I was anxious to get to the surface. Seconds (which felt like minutes) later, I surfaced with my prize in hand and saw my friends all staring over the side of the boat with looks of shock and disbelief. 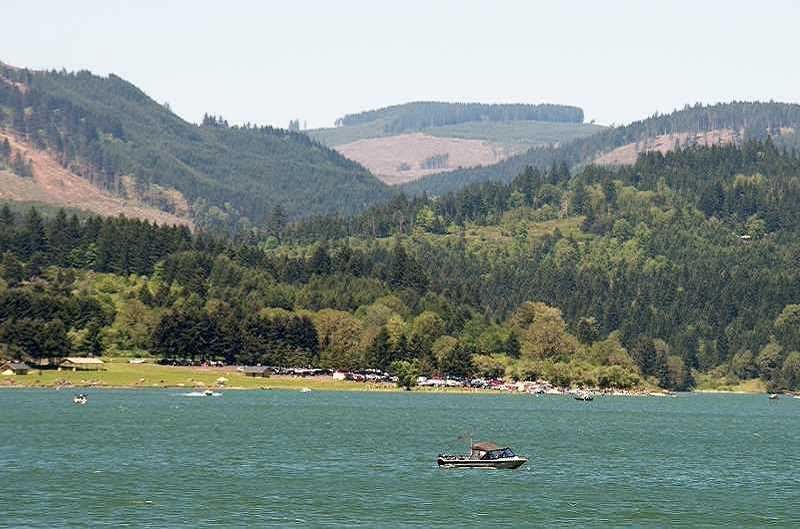 Too cold to fish

I tried to be brave after getting back in the boat and say that I was fine so we could all continue fishing, but the reality was that I was soaked from head to foot and I had no dry clothes. I was too cold to fish and getting colder with each passing minute, so we prematurely ended that fishing trip a half-hour after I went swimming.

I never really had a chance to try out my new gear on that trip. Like all fishing trips with Lori, it ended with an unusually dramatic and unexpected twist.

Titles must be earned

I hadn’t yet captured the world’s worst fisherman title, at that time, but I was well on my way. Many more years of frustration and ineptitude lay ahead. Stay tuned for Parts 3 and 4 for more mishaps and evidence that I really do deserve this title.