You are here: Home / Columns / RV Golfer / WPA Golf Legacy
This post may contain affiliate links or mention our own products, please check out our disclosure policy here.

A few years ago, I listened to my grandfather reminisce about the work he found during the Great Depression of the 1930s. He and thousands of other Americans helped build and rebuild infrastructure throughout the United States, some of which remains as a legacy today. In 1935, at the height of the Depression, President Franklin D. Roosevelt created the largest relief program in American history: the Works Progress Administration (WPA). Spanning a mere eight years, the WPA was the largest and most successful New Deal creation, with Congress appropriating $10.5 billion to employ millions of workers.

The results were impressive. During its brief existence, WPA workers produced 78,000 bridges, 650,000 miles of roads, 700 miles of airport runways, 125,000 military and civilian buildings, along with a host of golf courses and clubhouses. Though the numbers vary widely, estimates are that between 300 and 600 golf courses were built or renovated in 1935-43.

Harry Hopkins, the WPA director, intended that WPA projects, including golf courses, should be quality permanent construction. To build golf courses, he sought the advice of America’s most distinguished golfer and course designer, Bobby Jones, who signed on as a course consultant, reviewing course designs.

According to Rand Jerris, director of the United Golf Association’s Museum and Library, a few other well-known golf course designers were also on the bread line during the 1930s, including A. W. Tillinghast, Alister Mackenzie, Perry Maxwell, Donald Ross and Robert Trent Jones, Sr.

It’s clear that the WPA influenced the growth of golf throughout the country. Donald Ross, who designed Pinehurst in North Carolina, Broadmoor in Colorado Springs and Beverly in Chicago, built the George Wright Golf Course in Boston. John Van Kleek built the LaTourette Golf Course on Staten Island and the Split Rock Municipal Course in the Bronx, while Jim Thompson built the WPA course in Schenectady, New York. 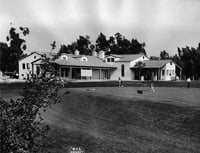 Hardly an area of the country wasn’t touched in some way by the talented hands of WPA workers. In Northern California, for example, historical records show that Alister Mackenzie designed Haggin Oaks Golf Course in Sacramento; he also oversaw the building of Augusta National, Cypress Point, and Pasatiempo. Additionally, Mackenzie was the lead architect in a WPA project in Sonoma County along the Russian River, which became the nine-hole Northwoods Golf Club. Also, Willie Watson, the course designer of San Francisco’s Olympic Club, oversaw a nine-hole WPA project in Ukiah. The Ukiah course was expanded to 18 holes in 1970, with Watson’s design preserved as holes one through eight and 18.

According to HistoryLink.org, the first nine holes at the Turquoise Valley Golf Course in Naco, Arizona, were constructed with WPA funds. They remain largely unchanged—still challenging—since their completion in 1936. The Turquoise Valley Golf Course is the oldest continuously operated course in Arizona. Its clubhouse, constructed from adobe block, was originally located in Bisbee, but was dismantled by WPA labor, and relocated to Naco in 1936. The original building was later enlarged with a brick wing on the west end. Plaques on the exterior commemorate the work of the WPA.

In a similar project, the Whitefish Golf Club and Clubhouse in Whitefish, Montana, was constructed by the WPA in 1937. Originally nine holes, the course was uniquely designated as both a golf course and airfield. Planes landed regularly, but became a hazard (duh!) to golfers. Thus, sometime in the 1940s the course became the emergency airfield for the area.

Though my grandfather never played golf or worked on building a golf course while employed for the WPA, I like to think that his efforts in helping build roads somehow led others to those many fine courses that today are the legacy of the Works Progress Administration and a bygone era that surely isn’t forgotten.

Rick Stedman is an avid golfer, RVer, and writer. Rick writes a weekly golf blog, “The 19th Hole,” which is published every Saturday at rvlife.com. He can be reached at rstedman@gmail.com.