You are here: Home / Blog / Yellowstone Lake’s History and Legends
This post may contain affiliate links or mention our own products, please check out our disclosure policy here. 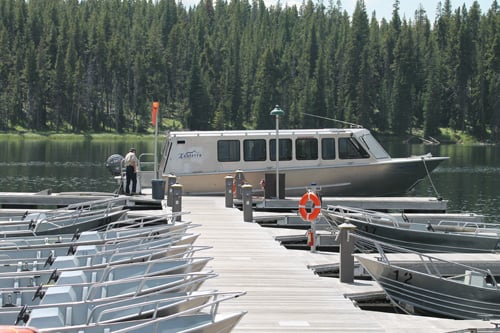 When we drove into Yellowstone National Park on May 25, 2014,Yellowstone Lake was frozen solid. I said, “That will not thaw all summer!” But it did—by mid June, blue waters of the largest body of water in Yellowstone National Park and the largest freshwater lake above 7,000 feet in North America were lapping the shoreline. Although I had been to Yellowstone several times—had even parked at Yellowstone Lake’s edge one day for a quick lunch in my motorhome, I did not know the history that surrounds this lake that covers 136 square miles with approximately 110 miles of shoreline. A commonly accepted fact is: The forest and valleys surrounding Yellowstone Lake had been populated with Native Americans since pre-historic times. Possibly, the first human of European descent to see the lake was trapper John Colter in the early 19th century. However, as evidenced in diaries left behind from the fur trading era of 1820-1840, the lake was likely visited by many trapping parties moving through the park region. Yet, accounts of waterfalls spouting upwards and bubbling mud were considered outlandish. Stories of “fire and brimstone” in geyser basins were met with disbelief. The first written account of the Yellowstone region appeared in a Philadelphia newspaper, but was considered “wild tales.”

Three miners explored the Yellowstone region and realized the need of preserving the area from commercialization. After returning from their expedition, Charles Cook and David Folsom wrote articles about the abundant wildlife, boiling pools, gushing geysers, waterfalls, rivers, and a natural fish cooking cone at the shore of Yellowstone Lake. However, reputable magazines refused to publish what they considered unreliable stories. 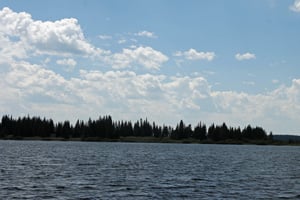 Viewing the Shoreline from Yellowstone Lake

In 1869, Ferdinand V. Hayden, head of the U.S. government’s new geological commission assembled geologists, botanists, and zoologists, as well as artist Thomas Moran and photographer William H. Jackson, to assess the area. The wonders and natural beauty stunned the party. Moran’s watercolors and Jackson’s photographs proved the wonders others had dismissed. Hayden made a 500-page report to Congress, and the lobbying to make Yellowstone a national park began.

In the Lake General Store hangs a July 28, 1871 photo of Annie, the boat used by the Hayden Expedition and believed to be the first European boat ever to sail on the lake. The men made their way around the shoreline, measuring and sketching maps. Their work with crude instruments of that day comes within one mile of today’s actual measurement.

Recreational boating has been permitted on the lake in various forms since 1890 when the first permits for the Yellowstone Boat Company were issued to operate a ferry across the lake between road junctions. Today, powerboats, sailboats, canoes, and kayaks are allowed on the lake with a Yellowstone Boating Permit 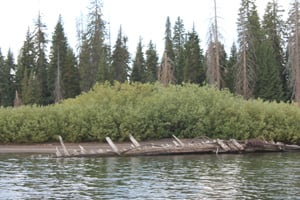 Remains of the SS E.C. Waters

One of the most fascinating stories about Yellowstone Lake comes from a one-hour tour on the Lake Queen, a passenger boat departing Bridge Bay Marina daily from mid-June through mid-September. The boat heads out and around Stevenson Island, one of several islands believed to have never been trod by humans before the early exploration parties from 1869 to 1871. 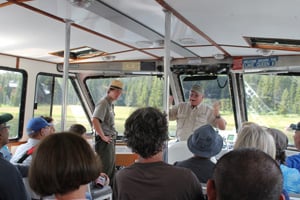 Aboard the Lake Queen

At one point in the middle of Yellowstone Lake, the Lake Queen turns in a circular pattern with the onboard ranger pointing out that the view of the shoreline is quite possibly the exact scene sighted by the first exploration parties—no buildings or improvements; untouched forests and mountains.

The ranger also relates a bit of history, or perhaps, a tale embellished over time, about the remains of the SS E.C. Waters, its hull visible at the edge of Stevenson Island. The story goes that in the summer of 1889 interest in a steamboat service on Yellowstone Lake grew, and a certain manager of the Lake Hotel, E.C. Waters, received a permit to put a boat on the lake under a franchise with the Yellowstone Park Association. Waters hauled the steel hull for a 40–ton steamboat into the park and christened the vessel, Zillah. The remaining parts for the boat, originally launched on the Great Lakes in 1884, were transported in segments by train and wagon and reassembled at Yellowstone Lake. 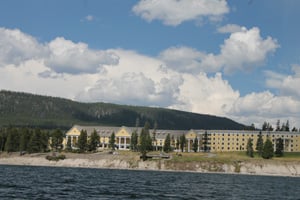 At that time, park visitors going to Yellowstone Lake Hotel, which had opened in 1891, had to be transported around the Park in horse drawn stagecoaches, enduring dusty, jarring routes that took at least a week. By boarding the Zillah, visitors decreased their arduous journey by at least 19 miles and allowed them comfortable travel across Yellowstone Lake from West Thumb Geyser Basin to Lake Hotel. For a while, entrepreneur Waters paid the coach drivers fifty cents for each passenger that boarded the Zillah. But then, Waters grew greedy, eyeing an opportunity to increase his profits. He determined to put animals on Stevenson’s Island, creating what he called a “zoo.” He fed the animals poorly with scraps from the hotel’s dining room. When he asked his passengers on the Zillah if they would like a stopover at the “zoo,” travelers eagerly assented. However, he charged each passenger an additional fifty cents to re-board his boat.

Despite his unscrupulous behavior, Waters launched a second, larger vessel in 1905 and named it the E.C. Waters. Supposedly adequate for transporting 500 people, a capacity Waters claimed, park officials refused to license the 125-foot steamship as a commercial ferry. The $60,000 boat became an idle investment that soon lay abandoned on the east side of Stevenson Island. The story goes that in 1907, Waters was banned from entering Yellowstone National Park. At first, the abandoned ship endured the unrelenting battering of Yellowstone Lake’s wind, waves, ice, and snow. But when the ice broke up in 1921, the E.C. Waters was thrust onto Stevenson Island’s beach. In the mid 1920s, the steam boiler that drove the engine was removed and installed in the Lake Hotel to provide heat. The old boiler served the hotel for 46 years.

However, the moored steamship fell into further ruin and became a warming shelter for winter skiers. According to Yellowstone historian Aubrey Haines, the E.C. Waters also turned into a prop for Jack Croney’s fish-fry business and the scene of brawls fueled with moonshine. In 1930, a group of rangers, under pressure to clean up the dilapidated eyesore, skied over the frozen lake to Stevenson Island and poured a can of kerosene on the bow of the boat. Apparently, they fired the wreckage without authorization of Yellowstone authorities, and according to Lee Whittlesey, another Yellowstone historian, one of the rangers was disciplined with a transfer to Ellis Island in New York’s harbor to serve the remainder of his career. Water’s ship, once stately and grand, was reduced to a blackened hulk, listing and sinking into the Stevenson Island sand. Today, the bleached ribs of the ship protrude from the shoreline. No plans to remove the wreckage from Stevenson Island are reported.

In 1996, researchers combed through the partially submerged remains, documenting every damaged beam, plank, and scrap of its propulsion system, including the cast-iron propeller. A few bits and pieces of the old ship were salvaged and removed. Its anchor is on display at the park’s Bridge Bay Marina, the point of departure for the Lake Queen. But ultimately, the old ship and the mysteries it holds remain part of the legends that abound in Yellowstone Lake’s history