You are here: Home / Blog / Yellowstone’s Wonders in Falling Water
This post may contain affiliate links or mention our own products, please check out our disclosure policy here. 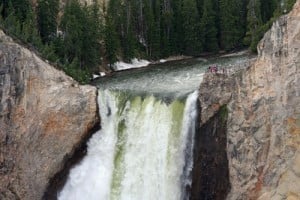 Yellowstone National Park abounds with hundreds of waterfalls; a few are visible from the Grand Loop Road, the paved roadway through the park. Others are a short hike off the main road, but still more are hidden miles into the wilderness. Lee made several day hikes into the back country to photograph the remote waterfalls. Together, we mostly hiked to falls off the Loop Road, and on trails that had high foot traffic. 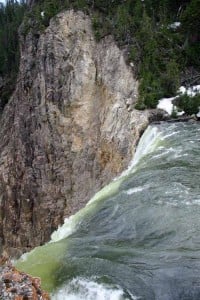 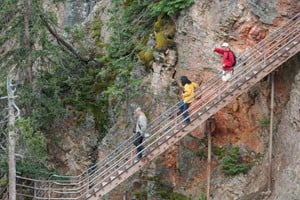 Stairs Attached to Cliff Opposite Brink of Lower Yellowstone Falls

The Lower Yellowstone Falls marks the head of the Grand Canyon of the Yellowstone, which is up to 1,000 feet at its deepest point. The magnitude of water rushing over the Lower Yellowstone is approximately 12 times more in the peak snow melt runoff in late spring and early summer than in the autumn months. While watching the majesty of the falling water—listening to its roar—I remembered that the Lower Yellowstone Falls is the largest volume waterfall in the Rocky Mountains of the United States. Lee and I often joked, asking each other when “they” turn off the falls. My brain is boggled to think that amount of water gushes daily—hourly, over the 308-foot drop in the Yellowstone River. We viewed the grand waterfall from the east at Inspiration Point, Grandview Point, and Lookout Point, and from the west at Artists Point. We climbed down the iron steps to see up-close the frothy water with an emerald streak falling into the river. We also hiked the switchback trail from the top to stand close to the edge of the falls.

The Upper Falls of the Grand Canyon of the Yellowstone is neither as tall nor as popular as Lower Falls, but the 109 foot waterfall is impressive in its own right. Located south of Canyon Village, a drive across Chittenden Bridge to Uncle Tom’s parking area reaches the trail head. First named the “upper falls” by members of the 1869 Folsom exploration party, its estimated height came within six feet of today’s measurement.

The power and magnificence of the falls that awes visitors today cast the same effect over early explorers. Only three years after the Folsom party laid eyes on the roaring waterfall, N.P. Langford of the Washburn party wrote in his diary that he and fellow explorers sat on a table rock, looking up at the descending water and feeling that their slightest movement might hurl them backwards into the swirling gulf of water below. He described the surging water as “…a thousand arrows of foam, leaping from the verge, and passing rapidly down the sheet.”

Although we had visited Yellowstone and many of the waterfalls on previous trips, we had never had the time to leisurely soak up their beauty. One of the first days we went into Yellowstone during our four-month stay, we took the Firehole Canyon Road, only half mile south of Madison Junction, to Firehole Falls. The falls are approximately 40 feet in height, dashing between steep gray canyon walls. Like most of the waterfalls in the park, the water volume is greater in spring and early summer.

Gibbon Falls, located on the Gibbon River about midway between Norris Geyser Basin and Madison Junction, is one of Yellowstone’s most accessible waterfalls. A large parking area leads to a walkway bordered by a rock wall. The paved walk affords excellent views of the falls tumbling approximately 80 feet in a gradual descent. The area is usually crowded. 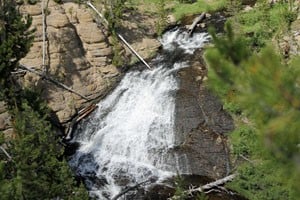 Little Gibbon Falls is one of those hidden jewels of Yellowstone, discovered on a hike along Wolf Lake Trail. We crossed the north edge of Virginia Meadows, carpeted in early summer with yellow buttercups. A few spots were boggy from snowmelt, but the flat trail eventually turned upward to a hilltop view of Little Gibbon Falls below. Dropping only 25 feet in the Gibbon River, the smaller waterfall that resembles Gibbon Falls attracts few visitors. The trail continues less than a quarter of a mile down to the river and the falls. From the trail above, we looked down on the waterfall and watched a father and son cast fishing lines into the Gibbon River.

Tower Fall, unseen from the Loop Road, is only a short hike—like 100 yards—from the Tower General Store. At least, the short walk gets to the overlook. The trail goes on in switchbacks for less than a half mile to reach the foot of the falls. At the bottom of the trail, the mist from water crashing against the rocks of Tower Creek sends out a coolness in the shady canyon. The 1870 Washburn party named the 132-foot water fall for the large tower-like rocks at the brink of the falls. One of those tall rocks crashed to the depths of the canyon in 1986. Fortunately, no visitors were standing at the foot of Tower Fall. 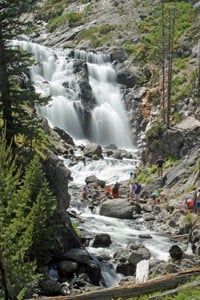 Mystic Falls is a popular day-hike destination and receives heavy foot traffic. From Biscuit Basin, less than two miles north of Old Faithful, the trailhead is accessed from the geyser basin. We crossed the Firehole River on a sturdy bridge and followed the boardwalk until the Little Firehole Meadows Trail at the west end. This trail is not well marked. However, found it and turned left and passed the junction sign for Mystic Falls Loop Trail. At less than a tenth of a mile, we turned left at the Summit Lake Trail and proceeded a little over a mile to Mystic Falls Overlook. We stood with other hikers—some families with young children—and gazed at the cascading 70-foot waterfall dropping the Firehole River from the Madison Plateau into Biscuit Basin. From the overlook, we also had a sweeping view of meadows and a young forest in restoration after the 1988 forest fire. 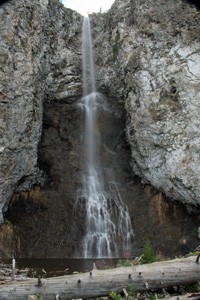 Fairy Falls is another relatively short, easy, and popular hike; at least the 4.8 mile round-trip route we took is shorter than two other options for hiking to the 197-foot waterfall aptly named for its delicate beauty. We skirted the Midway Geyser Basin with Grand Prismatic Spring off to our right. After a mile, we turned left onto a well-traveled path through thick stands of lodgepole pines. We met other hikers coming and going—and joined a group sitting on rocks at the foot of the falls. Its silvery strands of water falling over granite gray rocks mesmerized us.

Because we spent four months in Yellowstone, Lee and I had the privilege of exploring more than the average visitor. However, one can see a lot in only a few days from the Grand Loop Road. Many of Yellowstone’s wondrous waterfalls are accessible and short distances from the main thoroughfare through the park.

We recommend the Falcon Guide to Hiking Yellowstone National Park by Bill Scheider for directions and maps.