You are here: Home / Blog / Yukon River Adventure
This post may contain affiliate links or mention our own products, please check out our disclosure policy here. 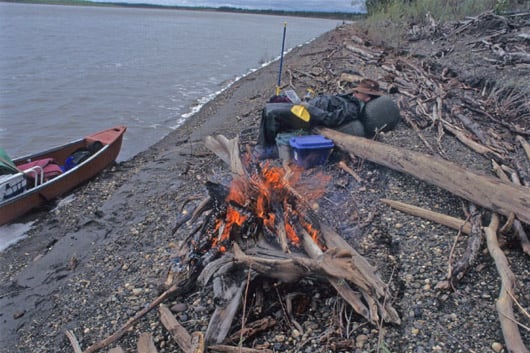 I posted a picture on my Facebook page on Monday that was taken of the Dalton Highway Bridge from the canoe that we were about to land at the end of our Yukon River canoe trip 18 years ago last spring. There was enough interest in the picture that I decided to write my blog about it this week. It certainly was the most adventurous thing that ever happened to this died-in-the-wool Michigan housewife. An adventure, by the way, that I probably would never have experienced if I hadn’t been a full-time RVer. 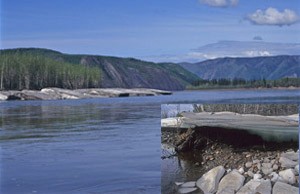 Icebergs along the Yukon

Full-time RVing gave me the time and the freedom to venture into places I would never have had the time (or money) to explore any other way. I said we went 500 miles but according to the Internet, it is actually 568 miles and we did it in 14 days so we were scooting right along! The whole story is in my RVing Alaska and Canada book so I’ll just give you a few tidbits.

A 17-foot canoe didn’t look all that small when it was setting next to a guide shop in Eagle, Alaska. I think it shrunk by the time my guide, Bill Elmore, put it in the 2,300-mile long 5th largest river in N. America (and Alaska’s longest river). It passes Eagle at 1.4 million gallons per second! Fortunately, I had a lot of faith in God and eventually, in my terrific guide or I would probably have backed out before I climbed in. 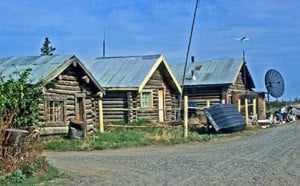 It is only a Class I river but then there are the sudden storms, deceiving sloughs, floating ice chunks and trees, whirlpools, and the frigid water. You know that if you flip, hyperthermia wouldn’t likely allow you to make it to shore if you are very far from it and in some places, it was a long way to shore. It was 158 miles from Eagle to Circle, AK where we had to spend a couple of nights due to storms. It was the last place to back out and the road to Fairbanks was closed because of wildfires! We crossed the Arctic Circle twice, visited four Native villages, but only overnighted inside a building one night, an abandoned Roadhouse. Otherwise, we were always in our little tent getting up and leaving by the crack of dawn. Dawn lasted about 10 minutes that time of year. 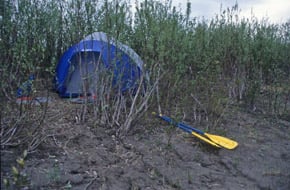 Tenting in the Brush

We enjoyed many campfires built with whatever had gathered along the shore. Both of us worked at cooking, cleaning up, and setting up the tent although Bill was much better at all that than I was. I warned him before the trip but he was brave. Bald Eagles were everywhere and we saw a few moose, fox, and falcons, but only one bear. The villages were fascinating and the Natives were friendly and helpful. As soon as Bill established that he was an Alaskan, he was accepted and the rest was smooth sailing, well, paddling. 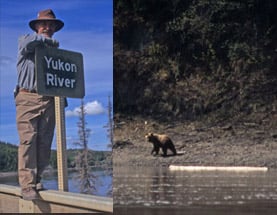 We pulled out at the E.L. Patton Yukon River Bridge, the only permanent crossing over the Yukon River in Alaska. A few years later, I took the motorhome over that bridge on my way along the “Haul” Road to Prudhoe Bay on the Arctic Ocean. That was another major adventure. I hope you’re having lots of adventures in your life. God Bless until next week.