You are here: Home / Columns / Tech Tips / Key Tips To Buying A Tow Dolly
This post may contain affiliate links or mention our own products, please check out our disclosure policy here.

Towing a second vehicle with your motorhome offers a great means to further enjoy your lifestyle on the road. Planning destinations within a destination, having easier access to remote areas for outdoor activities, or making quick runs to a nearby grocery store are just a few of the conveniences of having a compact second vehicle at hand.

For RVers who want to travel with a front-wheel drive car, a tow dolly may be the ideal travel companion. With a tow dolly, the drive wheels of your car are “off the pavement,” and as a result, no mileage adds up on your car odometer. Other advantages of many dollies available on the market now include easy installation, basic maintenance, and simple accessibility while on the road.

Sound like a dolly is for you? Here are some key considerations when dolly shopping. 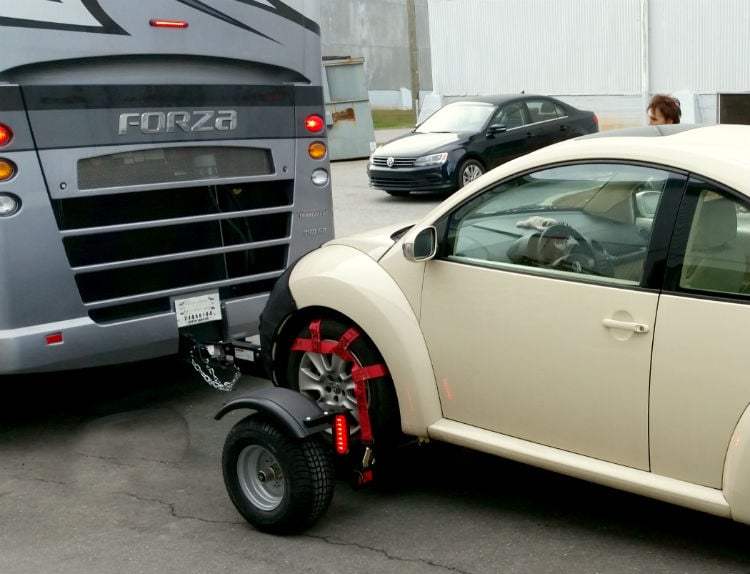 For RVers who want to travel with a front-wheel drive car, a tow dolly may be the ideal travel companion.

Tow dolly: To pivot, or not to pivot?

Back in the day when most cars had steering wheels that locked up when the key was off, tow dolly manufacturers dallied with “articulating turntables.” The wheels of the towed car were on a platform that would swivel with the dolly wheels, allowing the steering wheel of the car to remain locked. The trouble with the idea, though, is if a tight turn was made, the pivoting of the turntable could at times cause the dolly fenders to “come in contact” with the car. One RVer recalls how his, “only 99 miles on the clock” car ended up in the body shop after his first trip out with a dolly.

Not all dolly manufacturers use an articulating turntable. They’re not even really required for cars with locking steering. Simply load up the car, leave the key in the ignition and the wheel unlocked. If you do this, you’ll likely need to disconnect a battery terminal or remove the ignition fuse, or else you’ll put a nasty draw on the car battery. 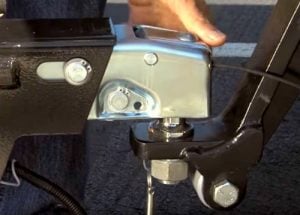 Many states require a braking system on a tow dolly – check with your DMV to be sure.

Many states require a braking system on a tow dolly—check with your DMV to be sure. “Idler tow dollies” are units that come without brakes, and yes, they’re a bit less expensive.

If your state doesn’t require dolly brakes and the car is light, then they might work for you. Brakes on a dolly is a great safety enhancer and will help you drive at ease a little more. Here’s the run-down on brakes: 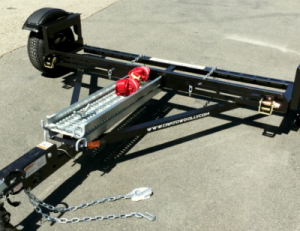 Find out how the frame of your tow dolly is built. Many dollies are “bolt together” design, while others are welded. As you cruise on down the road, into a campground, or another remote area, bolted-frame models can take a beating and require a regular inspection of nuts and bolts for security.

A welded frame doesn’t require this—if you bang your dolly hard enough to break a weld or really loosen a series of nuts or bolts, you might want to think of investing in a condo instead of an RV.

“There appears to be a 50 percent split of RVers who use a four-flat towing system and a tow dolly,” explains Richard Brown, President of The Acme Tow Dolly Company and the manufacturer of a series of car towing systems including the EZE-Tow Dolly, which highlights many of the dolly’s key features. “Some of the other advantages that we see with a dolly are when it’s not in use it’s always available for other purposes such as someone needing to move a car or similar uses.”

With all of the benefits of a welded-design frame, hydraulic surge disc brakes, and a comparatively light scale weight of less than 400 pounds, plus no articulation at the front of the dolly, chances are you’ll breathe easier when coming up on a tight turn or negotiating a steep grade on your next trip with a compact car in tow.

Things to keep in mind when using a dolly: