You are here: Home / Blog / The 19th Hole: Muscle Memory Not Forgotten With Alzheimer’s Patients
This post may contain affiliate links or mention our own products, please check out our disclosure policy here.

I remember the last time I went golfing with my dad, Bud. It was on a little executive par 3 course in the development where he lived. It was the day after Christmas, and we headed out to the first hole. He always kept score, and this day was no different. After each hole I would tell him my score 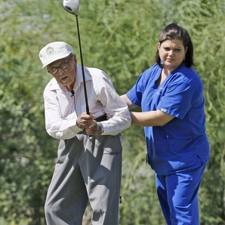 as we walked to the next tee box. I knew at the time that things were not the same as they once were since dad had showed signs of dementia for several months now. Though our normally peppy talks were anything but nowadays, dad still had a great golf swing.

When we returned to the house and got inside, dad handed me the scorecard, then sat down in the chair. I looked at the partially filled in scorecard, which brought tears to my eyes – the reality of his disease was staring back at me in the form of the jumbled numbers on the card. A few months later, we had to put dad in an Alzheimer’s facility.

As America ages, the Alzheimer’s population grows, estimated currently at 5.2 million. Though there is no cure for Alzheimer’s at present, experts say that outdoor activities, like those that were enjoyed in younger years, can make day-to-day life more pleasant, even enriching. Muscles remember what the mind cannot.

There are numerous examples of Alzheimer’s patients who come to life, so to speak, with certain activities. One patient could still play the piano quite well, despite her memory loss, while another re-engaged with life while in an art therapy program. Procedural memory, like swinging a golf club, is one of those things that remains accessible longer in the brain.

A clinical research facility in California suggests that getting patients outside and doing things like golf, as a general rule, wears them out and exposes them to sunlight, which helps them sleep better at night. Though any activity can be worthwhile, golfing even with a plastic ball can be the stimulus needed to provide a bit of comfort and happiness to the Alzheimer’s patient. Their muscles do remember what their minds cannot.