You are here: Home / Blog / The 19th Hole: New Golf Rangefinder Introduced this Month
This post may contain affiliate links or mention our own products, please check out our disclosure policy here.

Garmin International, makers of quality satellite navigation devices for more than two decades, introduces its Approach G6 GPS device at two trade shows this month. This new must-have for serious golfers was recently introduced at the Las Vegas Consumer Electronic Show and will also make another splash on the east coast at the annual PGA Merchandise Show in Orlando in late January.

The Approach G6 GPS golf device is sleek and user-friendly, and weighs just over three ounces. It comes with more than 25,000 pre-loaded worldwide golf courses, and is equipped with an internal rechargeable battery which allows golfers to use the device for an entire weekend, roughly 15 hours, on one charge. There are no subscriptions or additional fees. Company officials also say that course updates and new courses will be updated throughout the year, available free to users.
Another nice feature of the Approach G6 is its layup arcs which are drawn on the map and offer at-a-glance references for the 100, 150, 200, and 250 yard markers for layup decisions. Golfers can also touch the place on the layout map that they want to measure or get a closer look at the landing area. 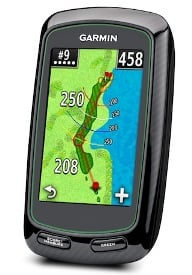 The Approach G6 also allows for keeping track of a player’s stats throughout the round, like fairways hit, greens in regulation, and putts per round. You can also track the average distance you hit with each club. Keeping track of strokes for up to four golfers is also an option, be it stroke play, the Stableford method, a skins game, or match play, with adjustable handicaps.

The Approach G6 also helps you zero in on the pin with green view. Just tap the flag on the map to zoom in on the green — then you can drag the flag to position it where you see it, giving you more accurate yardage.

The new Garmin Approach G6 has an anticipated public launch in mid February. It will have a suggested retail price of $299.99. www.garmin.com.